What Voyager 2 has learned since entering interstellar space 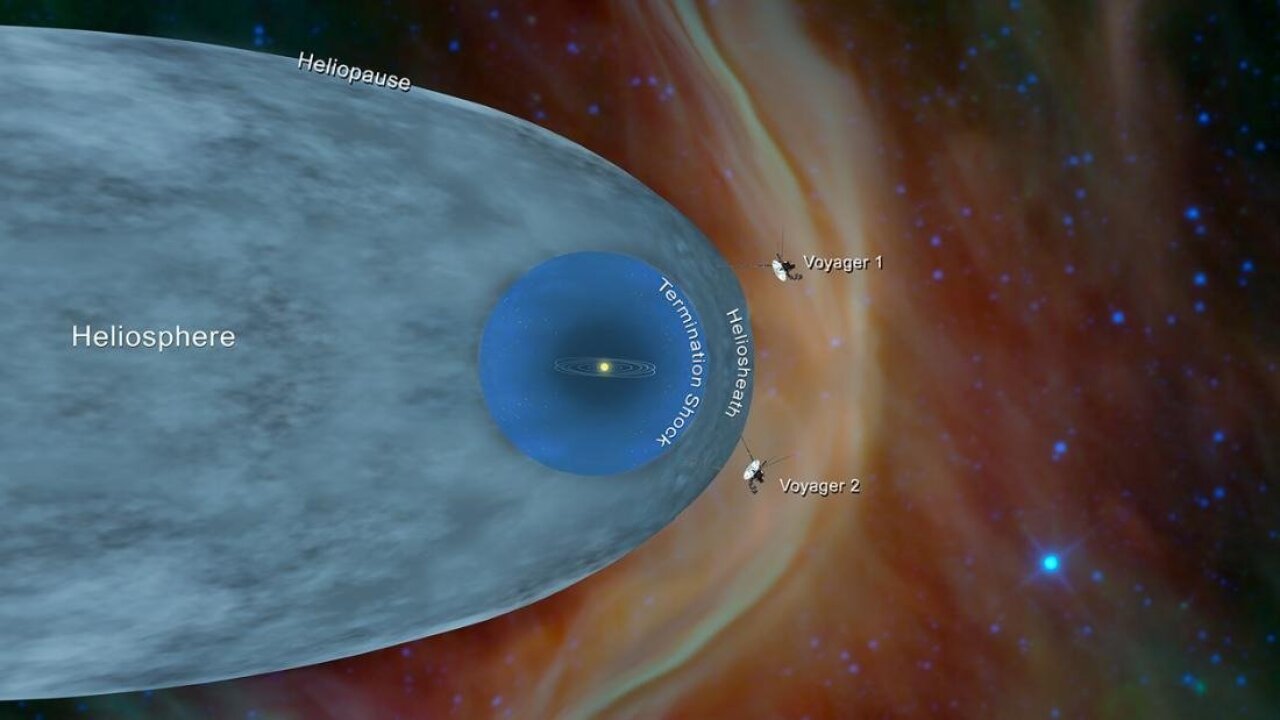 However, just because the probes have left the heliosphere doesn't mean they have left our solar system. That boundary is located at the outermost edge of the Oort Cloud, a group of small objects influenced by the gravity of our sun. Scientists believe it would take Voyager 2,300 years to reach the inner edge of the cloud, and 30,000 years to fly past it completely.

A suite of five studies detailing the findings was published Monday in the journal Nature Astronomy .

There's a boundary where hot solar wind meets cold interstellar space, and it's called the heliopause. Mission scientists compared data from instruments on Voyager 2 to determine that the actual date of the crossing was November 5, when the solar wind particles around the probe dipped greatly, meaning it left the heliosphere -- the sun's bubble-shaped boundary created by solar wind being released from the star.

The new studies confirm this date and reveal that the crossing happened in less than a day and more than 11 billion miles from the sun. Voyager 2 pushed across the heliopause from the hot, lower-density plasma of the solar wind into the cool, higher-density plasma of interstellar space.

Somehow, there is balance between these two very different regions, and astronomers believe it's the density that helps even out the pressure differences.

Voyager 1 also crossed into interstellar space in 2012, but its damaged plasma instrument couldn't provide complete data about the crossing.

"This has really been a wonderful journey that began with the launch of two spacecraft in 1977 to explore Jupiter and Saturn," said Ed Stone, a Voyager project scientist since 1975 and physics professor at the California Institute of Technology who authored one of the studies. "Our journey has expanded deeper and deeper into space. We had no quantitative idea of how big this bubble is that the sun creates around itself with its supersonic solar wind, made of ionized plasma, which is speeding away from the sun in all directions. And we didn't know the spacecraft could live long enough to reach the edge of the bubble, leave it and enter nearby interstellar space."

"In a historical sense, the old idea that the solar wind will just be gradually whittled away as you go further into interstellar space is simply not true," said Don Gurnett, author of one of the studies at the University of Iowa. "We show with Voyager 2 -- and previously with Voyager 1 -- that there's a distinct boundary out there. It's just astonishing how fluids, including plasmas, form boundaries."

The interaction between the sun and interstellar space is also intriguing to the scientists. Shockwaves released by the sun can pass right through the heliopause into interstellar medium and cause disturbances, much like supernovae form shockwaves that travel through the space between stars.

All of the early insight gained from this crossing is providing a complex picture of what happens in between the sun and interstellar space. This knowledge could be applied to all the stars astronomers study, because they believe other stars likely possess the same features. As they study other stars with exoplanets around them, what they learn now could be applied to other systems they discover.

Comparing what Voyager 2 learned with the data available from the Voyager 1 crossing provides interesting similarities and contrasts, Stone said. And they provide two data points based on where they crossed into interstellar space.

But the scientists still hope NASA signs off on another interstellar probe to gather more data. Thinking of the heliosphere like a wind sock, astronomers would want a probe that could essentially travel down the tail created by the sun's wind, extending the boundary of the solar system.

The fact that both Voyager 1 and 2, which launched in 1977 to explore planets in our solar system, were designed to only last for five years and have reached 42 is a wonderfully exciting surprise, Stone said.

"The space age was only 20 years old when they launched, so it was hard to expect anything to last for 40 years or longer," he added.

But this record-setting feat wouldn't be possible without the engineers who have had to make crucial decisions that keep the twin spacecraft going. Now they have a new plan that will keep Voyager 1 and 2 awake and operating so scientists may continue to receive vital data about a part of space we've never explored.

One struggle is maintaining power, which is needed to keep science instruments running as well as the heaters that will keep them from freezing in deep space. Both probes are now more than 11 billion miles from the sun, which makes the heaters crucial for maintaining functions. If fuel can't power the thrusters that make sure both probes orient their antennae toward Earth, engineers wouldn't be able to receive data or communicate with the probes.

Over time, power system efficiency has decreased, and the generators produce 40% less than they did at the time of launch.

The thrusters on both spacecraft are also degrading. They send out small puffs that keep the spacecraft oriented, meaning their antennae are still directed at Earth. Voyager 2 will soon fire up another set of thrusters last used during its flyby of Neptune in 1989. Engineers did the same thing with thrusters on Voyager 1 in 2017.

Voyager 2 is the main priority for receiving new plans because it's collecting more data with an instrument that isn't working on Voyager 1. It's also using more power, so engineers turned off a heater for the Cosmic Ray Subsystem. That instrument dropped to minus 74 degrees Fahrenheit, but it's still sending back data. This is remarkable considering that the instrument was initially tested at only minus 49 degrees Fahrenheit.

The scientists can still communicate with Voyager 2, even in interstellar space, but the data takes about 16.5 hours to travel back to Earth.

With the new plan to save power and orient the spacecraft, the engineers expect that Voyager 1 and 2 will still send back data for at least the next few years.

The data gathered by the probes has helped inform NASA's Interstellar Mapping and Acceleration Probe , scheduled to launch in 2024.

"Both Voyager probes are exploring regions never before visited, so every day is a day of discovery," Stone said. "Voyager is going to keep surprising us with new insights about deep space."