There are four new smartphones and new wireless earbuds 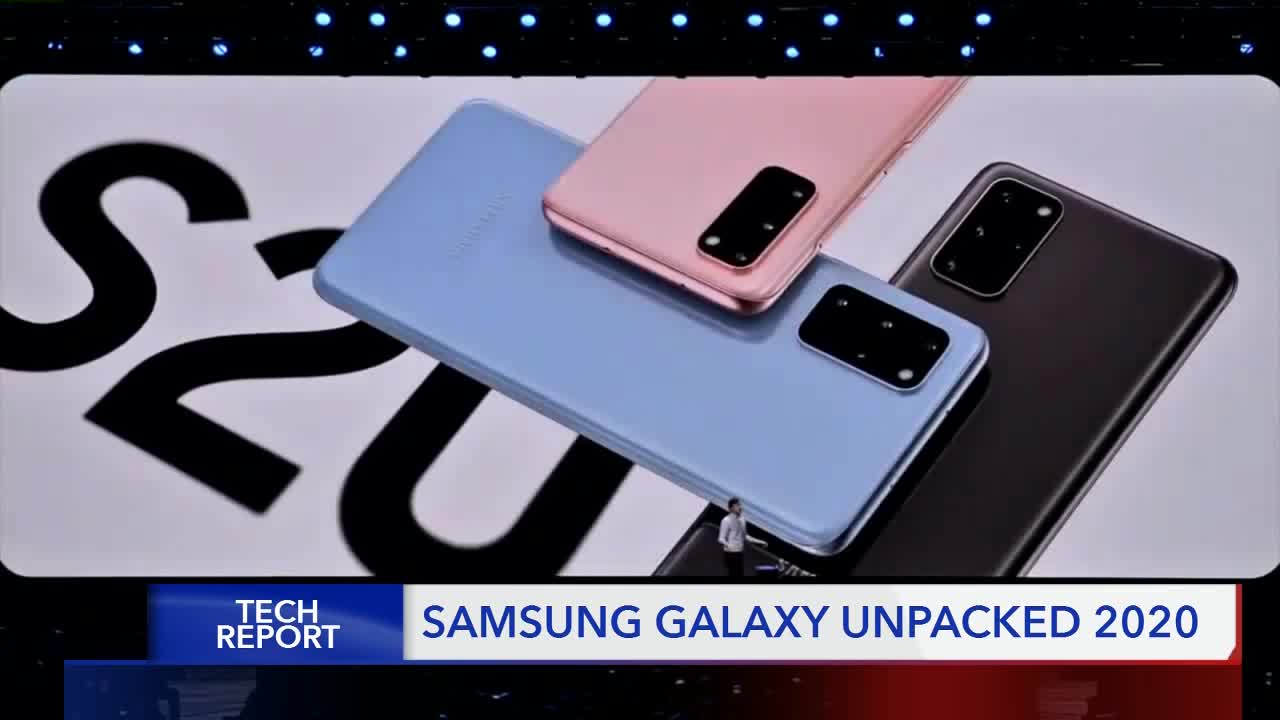 SAN FRANCISCO — Samsung unveiled a series of new electronics on Tuesday at their Galaxy Unpacked event.

Overall, they revealed five new products including four smartphones and a pair of wireless headphones.

The tech giant didn't waste any time getting straight to the main attraction, the Galaxy Z Flip smartphone.

It has a 6.7 inch vertically folding display with 256GB of internal storage.

The Galaxy Z Flip has a 10 megapixel front camera and two 12 megapixel rear cameras, one wide-angle and the other ultra wide-angle.

Rebecca Hirst, Head of UK Mobile Product Marketing at Samsung says the Galaxy Z Flip has a "Freestop Hinge" so it can stay open at different angles like a laptop.

She says this allows the foldable smartphone to enter "Flex Mode" which splits the screen into two parts, a viewing area and an interaction area.

This mode also lets you take a selfie hands free by propping the phone up.

There's also what's called a "Hideaway Hinge" which stops dust and sand from getting into the phone when its opened and closed over and over again.

The Galaxy Z Flip is also equipped with a fingerprint sensor which is uses to unlock it. It can also be unlocked with a pin code.

Notifications can also be viewed when the smartphone is closed and phone calls will also display on the outer face of the phone.

Next up are the Galaxy S20 and the S20+ smartphones, which have noticeable camera and appearance upgrades.

The S20 has a 6.2 inch display that reaches edge to edge horizontally and almost completely edge to edge vertically with a small hole at the top just for the 10 megapixel front camera.

The Galaxy S20 has 512 megabytes of internal storage but can be bulked up with a 1 terabyte micro SD card.

It can be unlocked using a fingerprint reader, facial recognition or a pin code.

The Galaxy S20+ has the same feature as the S20 except the screen is larger at 6.7 inches and it has an extra camera called "Depth Vision" which gives the illusion of depth of field like what you'd seen in depth effect photos taken on newer iPhones.

This phone rounds out the Galaxy S20 series of smartphones and it's biggest draw is the impressive quad camera system.

The Galaxy S20 Ultra also has a 40 megapixel front camera which will likely make for some super high-quality selfies.

This phone is only available in two colors: Cosmic Gray and Cosmic Black.

The final piece of electronics to be revealed at Samsung's Unpacked event were the Galaxy Buds+ which are the upgrade to the previous model.

This model of wireless headphones have 2 speakers, one for higher pitched sounds and the other for bass.

They also have 2 outer microphones and an internal one.

Samsung says they have an estimated battery life of 22 hours, when not in use, with 15 hours of talk time and 11 hours of music streaming time.

Galaxy Buds+'s tunes out unwanted noises, while Ambient Aware lets you filter-in important sounds from the outside world, like flight announcements, oncoming traffic or your order number.