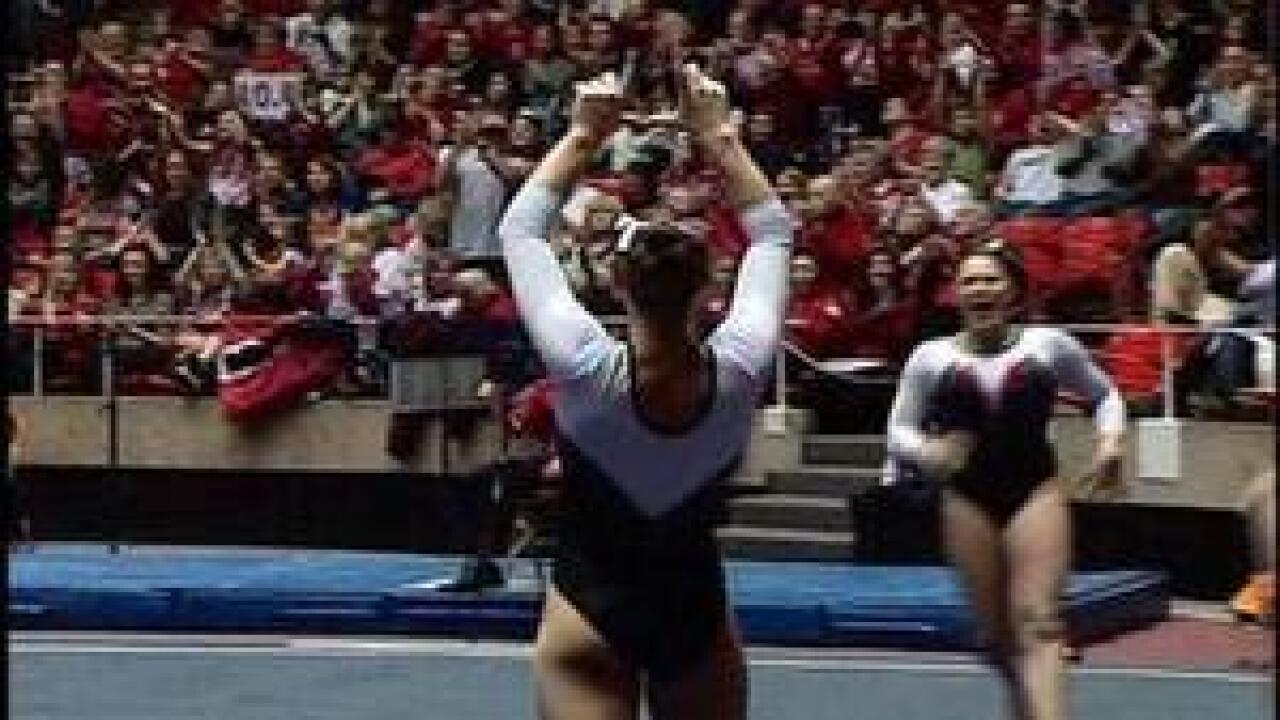 The top-ranked University of Utah Red Rocks gymnastics team showed why they are number one on floor as they pulled ahead in the last rotation to top number 4 Georgia Friday night with a score of 197.150 to 196.950.

Nearly 15,000 fans crowded the Huntsman Center to see two of the most historically successful college gymnastics programs compete in the latest meeting of a controversy-riddled rivalry. The gymnasts didn’t disappoint with the victory coming down to the final competitors of the night.

Utah rose to number 1 in the NCAA this week after recording a 197.550 in last week’s meet against Brigham Young, marking the first time Utah has been atop the rankings since Feb. 2009. The team remained in the top spot on both beam and floor. Georgia rose to number 4 this week after a 197.250 victory over LSU.

Georgia took an early lead after the first rotation with solid scores on bars, including a 9.90 from Gina Nuccio and 9.925 by Kat Ding. The Gym Dogs finished with a 49.275 on the rotation.

The Red Rocks had their lowest vault score of the season with steps on landings from almost all competitors. Freshman Georgia Dabritz was the only Ute to score above a 9.85, finishing with a 9.925. The Red Rocks finished with a 49.225 on the apparatus, just 0.050 points behind Georgia.

Georgia had similar problems on vault, with most gymnasts stepping on their landings. Kat Ding, the final competitor for the Gym Dogs, was the only team member to hit the 9.90 mark. Georgia finished with a 49.175 on the vault.

Utah finished the bars with their second lowest of the season–they scored a disappointing 48.450 in their season opener against UCLA. Senior all-arounder Stephanie McAllister was the only Ute of the night to score a 9.90 a week after four gymnasts hit that score in their meet against BYU. Utah finished with a 49.250, putting them up by just 0.025 at the midway point of the meet.

Mary Beth Lofgren had a big wobble and Cortni Beers took several steps on her landing for the Utes on beam, and scores in the 9.80-9.85 range from the rest of the gymnasts put the Utes with a final score of 49.175 on the rotation. Sophomore all-arounder Corrie Lothrop was the only Ute to score a 9.90.

Shayla Worley suffered two falls on the floor for Georgia, but a 9.95 from Noel Couch, the final Gym Dog on the event, and solid scores from the rest of the team put Georgia in the lead by 0.10 going into the final rotation with a score of 49.300.

Utah showed why they are top-ranked on the floor, with lead-off gymnast Becky Tutka scoring a 9.85 for Utah, their lowest counted score of the night. Lothrop had a lively, near perfect routine that got the crowd cheering and standing on their feet for her 9.95. McAllister took advantage of the energy in the crowd and earned another standing ovation for the Utes’ second 9.95 of the night.

Georgia, second in the nation on beam, had a strong performance from most of their gymnasts on the apparatus, but they could not top Utah’s floor performance and fell behind at the end of the meet. Worley scored a 9.90 for the Gym Dogs and the team finished with a 49.200.

Utah heads to Tempe to compete against Arizona State next Sunday, then Michigan the following Friday. They return to Salt Lake City and the Huntsman Center on Feb. 24 to host Stanford at 7 p.m.