Powell voice mail: ‘I am not able to live without my sons’ 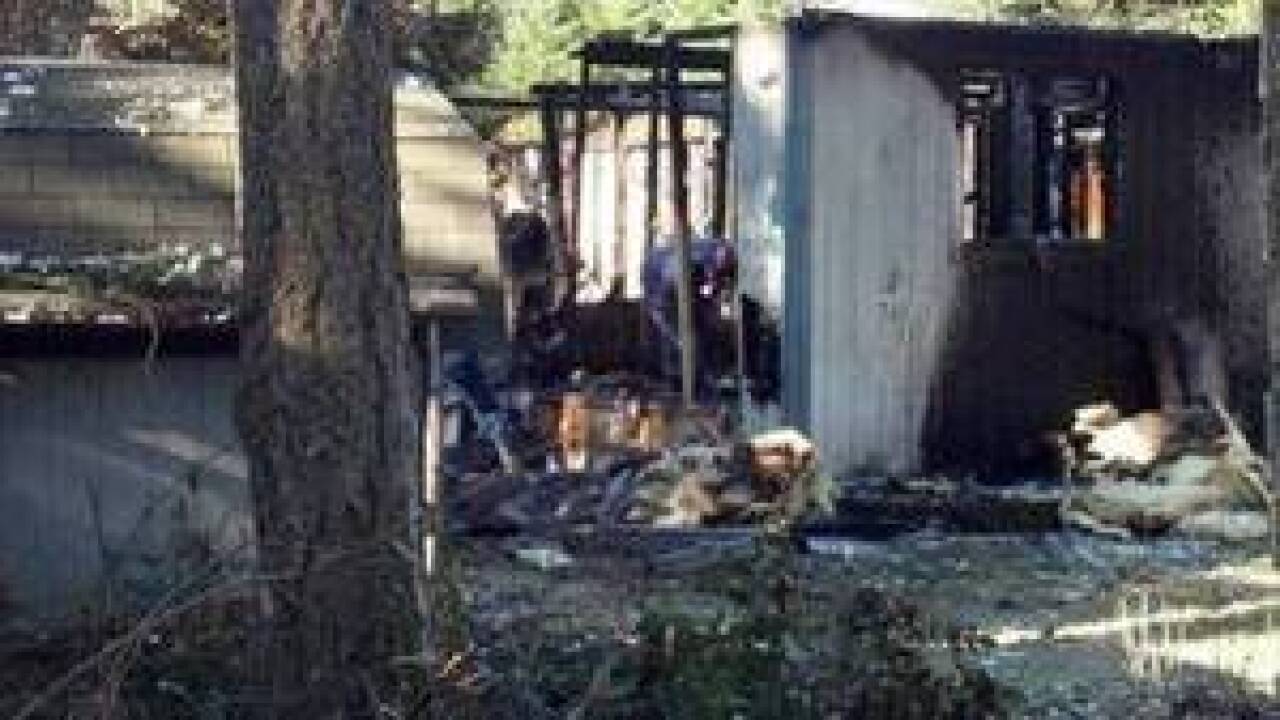 Minutes before he wounded his two young sons with a hatchet and set his house ablaze, killing all three of them, Josh Powell left a last voice mail to family members.

“I am not able to live without my sons, and I’m not able to go on anymore,” he said, according to ABC News, which obtained the voice mail. “I’m sorry to everyone I’ve hurt. Goodbye.”

The two children, Charlie, 7, and 5-year-old Braden died Sunday along with their father in what police believe was a murder-suicide.

Investigators found the hatchet they believe was used on the boys in Powell’s Graham, Washington, home, said Ed Troyer, spokesman for the Pierce County Sheriff’s Department. Authorities believe Powell set an explosive fire there after wounding the boys Sunday afternoon.

Powell was a suspect in the 2009 disappearance of his wife, Susan Cox-Powell.

Autopsies showed his sons, 5-year-old Braden and 7-year-old Charlie, suffered “chop” injuries to their necks, but both boys and their father died from inhaling carbon monoxide, the county medical examiner’s office said.

But before dousing his Puyallup home with gasoline and setting it ablaze, Powell gave toys and books to charity and sent multiple goodbye e-mails, authorities said Monday.

That evidence suggests that Powell planned the deaths for some time, Troyer said — “I believe this was intentional.”

It was a tragic development in a puzzling saga that began two years ago in the Salt Lake City suburb of West Valley City, Utah, when 28-year-old Cox-Powell disappeared.

He also sent e-mails to his pastor and others just minutes before the fire, giving instructions on how to handle his end-of-life business, according to Troyer. The sheriff’s department has copies of some of the e-mails sent to the attorney, family and friends, saying “he couldn’t live with what was going on,” Troyer said.

The spokesman added that authorities found two five-gallon cans of gas in the home, one of which appeared to have been lit right next to the bodies, which were found together in the same room.

On Sunday, a social worker brought the boys to Powell’s home for a court-ordered supervised visit, authorities said. But as they approached the door, Powell pushed the social worker back, took the boys inside and locked the door.

The social worker, who later reported smelling something similar to gas at the time, tried “pounding the doors, trying to get in,” said Gary Franz, a deputy chief with Graham, Washington, Fire and Rescue.

About two minutes later, as the social worker was calling her supervisor, the house exploded, Franz said. The powerful blast shook houses, with debris landing on lawns blocks away.

The deaths of Powell and the children could mean Cox-Powell’s disappearance might never be solved.

Still, the case remains open and investigators vowed to pursue it until the point of closure.

“I promised the Coxes I wasn’t giving up, and I’m still not because we want to get some closure here,” West Valley City, Utah, Police Chief Buzz Nielsen said Monday. “The case is still active; we’re not closing the case. We still got things that have not been resolved.”

Cox-Powell’s sister, Denise Cox, told CNN on Tuesday she had been told by her family that Powell could be arrested within a few weeks and that authorities were attempting to build a case against him despite the lack of a body.

“We were all excited that something was going to happen,” she said, adding the family was hoping that a deal could be made or Powell could be coerced to divulge his wife’s whereabouts.

In the meantime, Powell, who had not been arrested or charged, was embroiled in an ugly custody dispute with the Cox family.

In recent months, the children had started opening up and talking about what happened the night their mother disappeared, members of the Cox family said.

“They basically kept saying how they went on a vacation in the desert, and camping … they stopped at some place, and mommy and daddy left, and only daddy came back,” Judy Cox, Susan Cox-Powell’s mother, told NBC’s “Today” on Tuesday.

Chuck Cox, Susan Cox-Powell’s father, told “Today” that the younger boy, Braden, had drawn a picture of the family’s minivan. Asked who was in the minivan, the child told his teachers “that was his daddy, Charlie and himself, and that Mommy was in the trunk,” he said.

“When I would say, ‘Well, daddy said mommy stayed home’ (from the camping trip), then they would go back to, ‘I don’t remember,” a rehearsed, you know, a coached statement,” he said.

Authorities believe that by setting the fire, Powell not only killed his children — he eliminated evidence in his wife’s disappearance.

“Those boys were evidence. Those boys were going to be evidence against him,” Troyer said. “You’re looking at somebody who’s willing to kill their own kids … killing your wife isn’t that much of a stretch from there.”

Asked whether she believes Powell’s motive was the custody battle or remarks made by the children, Judy Cox told “Today” she felt it was both.

“He was feeling cornered,” she said. “… Basically, he didn’t like us, and he wanted to get the kids away from us so much,” she said. “It really bothered him that the boys were showing such affection to Chuck.”

According to investigators, Powell had said the last time he saw his wife was the night he and his sons — then ages 2 and 4 — left to go camping after midnight in freezing weather.

Cox-Powell’s sister eventually reported her missing. A month later, Powell and his children moved from Utah to Washington.

The double homicide and suicide on Sunday came days after a judge refused Powell’s petition to regain custody of his children. The judge instead ordered Powell undergo psychological evaluations — an order that came after authorities turned up child pornography in the home Powell shared with his father, Steven Powell.

As part of the investigation into Cox-Powell’s disappearance, a search of the home was conducted last year. During the search, investigators “discovered numerous images and recordings of adult and juvenile females,” according to a statement released by the Pierce County sheriff’s department.

Steven Powell, was subsequently charged with 14 counts of voyeurism and one count of possessing images of children engaged in sexually explicit conduct, according to court documents.

After the arrest of Powell’s father, custody of his sons went to the Coxes, according to Washington state court records. Powell maintained in court documents filed last week that he established his own home after his father’s arrest and had “consistently proven my fitness as a stable and loving parent under close supervision by (child welfare caseworkers).”

The Coxes said they were concerned about Powell’s having visitation, but noted that several previous visitations were uneventful. However, they were worried about the first visitation after the court’s ruling, Chuck Cox said on “Today.”

“We knew that if he was cornered and felt like there was no way out, that he was capable of this,” he said of Powell. The couple had communicated their concerns to police and child welfare workers, he said.

“I understand they have a lot of people and they deal with a lot of people who exaggerate the threat — cry wolf, if you will,” he said. But, given the circumstances, “… we felt they should have taken more care.”

He told “Good Morning America” on Tuesday his only warning that something may be about to happen was that Powell appeared to have stepped up his cooperation with child welfare workers.

“I remember he seemed to be cooperating more with my daughter before she went missing,” Chuck Cox said. “That was a warning sign to me.”

Despite their grief, the family is attempting to open up to the public “spreading the word on how wonderful the boys were, and how tragic it is, and trying to drum up some more attention” so a search for Cox-Powell can be launched, Denise Cox said.

Sunday morning, Judy Cox told “Today,” the boys did not want to go to their father’s, although they sometimes did look forward to visits with him.

The Coxes told NBC their faith helps them stay strong.

“We know where our daughter is, and we know that she’s not here on this Earth … and that she’s safe,” Chuck Cox said. “And we know the boys are back with their mother, and that gives us a lot of strength.”