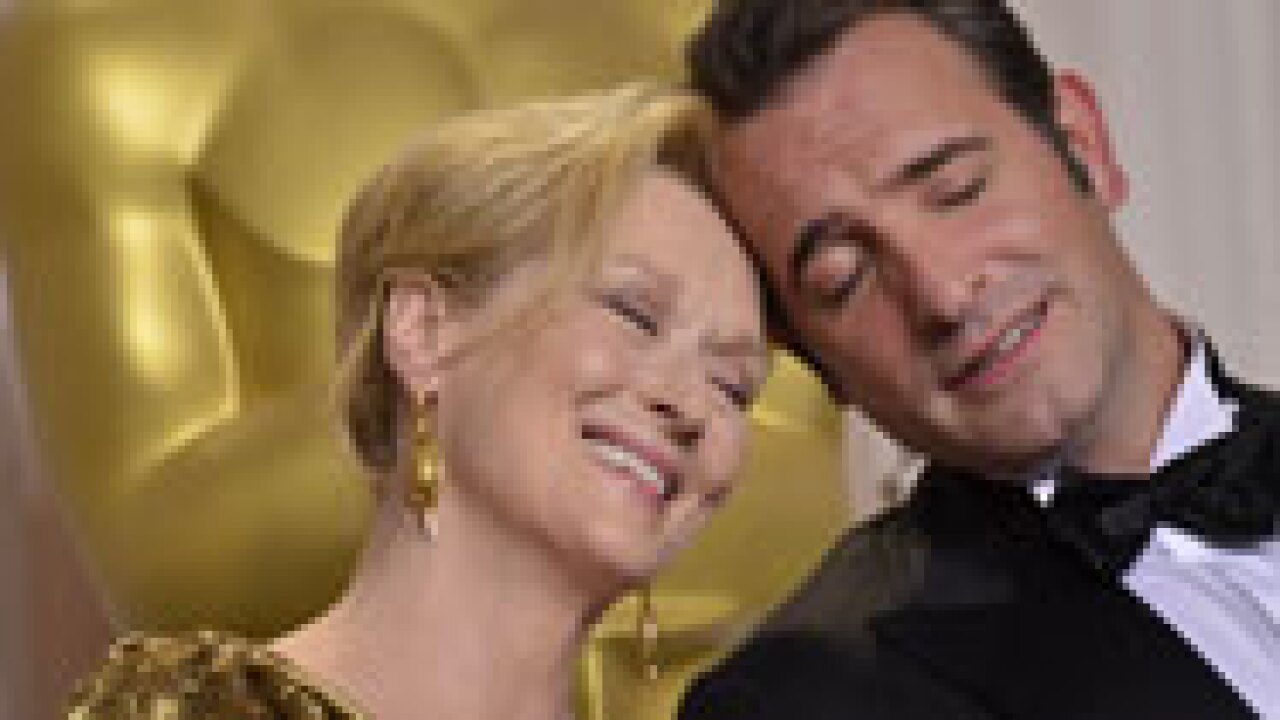 For the first time since 1929, when the clubby, self-promotional and studio-driven Academy of Motion Picture Arts and Sciences recognized “Wings” and “Sunrise” in the first Academy Awards ceremony, a black-and-white silent feature won the Oscar.

A solid success overseas if a modest one in the United States, “The Artist” ruled a heavily nostalgic awards show Sunday at the theater formerly known as the Kodak. French writer-director Michel Hazanavicius’ affectionate ode to the late-silent and early sound eras in Hollywood won five Oscars in all, including the lead actor award for Jean Dujardin’s zesty portrayal of a Jazz Age matinee idol, and a win for Hazanavicius as best director.

“Sometimes life is wonderful. Today is one of those days,” Hazanavicius said, accepting the directing Oscar.

“Hugo,” director Martin Scorsese’s lavishly staged fantasy set in 1930s Paris and a reminder of the importance of film preservation, tied with “The Artist” for five wins. Though design and technical Oscars were spread among an array of winners, “Hugo” led the pack with awards for cinematography, visual effects, art direction, sound editing and sound mixing. “The Girl With the Dragon Tattoo” won for editing, “The Artist” for costume design, “The Iron Lady” for makeup.

This year’s lead actress Oscar race was perceived by many to be a matter of Meryl Streep’s Margaret Thatcher, in the indifferently received biopic “The Iron Lady,” versus Viola Davis’ Aibileen Clark, a maid effecting social change under the radar in early 1960s Jackson, Miss., in everybody’s favorite book-club-favorite adaptation, “The Help.”

The movie didn’t get much traction in the United States, but “The Iron Lady” took home a crucial Oscar to go with the makeup, in the leading actress category. Seventeen-time Oscar nominee Streep went home a winner.

“Why her? Again?!” Streep joked on stage, speculating on the public’s response to her latest win. “But whatever.”

This was Streep’s first win since 1982’s “Sophie’s Choice.” Before that Streep was awarded in the supporting actress slot for 1979’s “Kramer vs. Kramer.” In recent weeks, Viola Davis of “The Help” was widely believed to be front-runner for lead actress. But with her “Iron Lady” win, Streep becomes the fifth performer in history to receive three Oscars. Walter Brennan, Ingrid Bergman and Jack Nicholson won three apiece; Katharine Hepburn tops the academy heap with four.

Since his triumph last May at the 2011 Cannes Film Festival, Dujardin has been on a prize-winning roll for his work in “The Artist,” most recently picking up trophies at the Golden Globes and this weekend’s Spirit Awards for independent film. Dujardin’s energizing turn as a mighty and then fallen silent film star propelled “The Artist” to worldwide success, if only modest financial returns ($32 million) in North America to date.

On Sunday, Dujardin became the first French actor to win an Oscar, edging his nearest meaningful competition, George Clooney (nominated for “The Descendants”), in the leading actor category. Ironically one of the few major awards not won by Dujardin was France’s Oscars equivalent, the Cesars, handed out over the weekend. (He was aced out by Omar Sy as a wisecracking health care worker in the comedy “Intouchables.”)

At 82, the same age as fellow supporting actor nominee Max von Sydow, the silken Christopher Plummer became the oldest recipient of an acting Oscar for his performance as a recently un-closeted widower in “Beginners.”

“You’re only two years older than me, darling,” Plummer’s exquisitely well-practiced acceptance speech began, as he regarded his statuette. “Where have you been all my life?” Plummer also thanked “my long-suffering wife, Elaine, who deserves the Nobel Peace Prize for coming to my rescue every day of my life.”

Like Plummer, Octavia Spencer of “The Help” went into Sunday’s ceremony a favorite, and her juicy supporting turn as Minnie came through for her with the voters. It was, however, the sole win for the most popular (in terms of grosses) of the nine nominated best picture titles.

“Rango,” an animated Sergio Leone-inflected Western that suited this Oscar year’s obsession with nostalgia and populist mythmaking, won the animated feature award. “Someone asked me if this film was for kids…I don’t know,” said director Gore Verbinski on stage. It was, however, “created by grownups acting like children.”

“Undefeated,” a chronicle of a Memphis high school football team, won for documentary feature; it opens March 2 in Chicago.

The red carpet-averse Woody Allen won his fourth Oscar out of a career total of 23 nominations, this one for his “Midnight in Paris” original screenplay, a movie about a man more obsessed with the past (Paris in the ’20s) than this year’s Oscars were obsessed with the movies’ earlier days. Adapted from Kaui Hart Hemmings’ novel, director and co-writer Alexander Payne’s “The Descendants” (Nat Faxon and Jim Rash were his co-winners) – a relatively faithful job of adaptation – was named best adapted screenplay.

The Iranian drama “A Separation,” which would’ve been graced with a dozen Oscar nominations (instead of two) by a more internationally minded academy, won for best foreign language film for this tale of a Tehran custody battle, a series of deceptions and the emotional costs of divorce. Writer-director Asghar Farhadi dedicated his win, the latest honor among many around the world, to his fellow Iranians fighting to transcend the “hostility and resentment” generated by politics.

The 5,783 eligible academy voters were asked to rank the nine best picture nominees in order of preference. “The Artist” may have received more than the crucial 50 percent of No. 1 votes on the first round. Or it may have gotten there by process of elimination. According to the academy voting rules, if any one film failed to garner 50 percent of the vote on round one, the best picture nominee with the fewest number-one votes was eliminated and its votes were shifted to the film ranking second on each ballot. And the process in theory could’ve been repeated until “The Artist” reached the magic 50 percent mark.

Over the past decade, the best picture award winners’ box office performance in worldwide theatrical release has ranged from “The Hurt Locker” (just less than $50 million) to “The Lord of the Rings: The Return of the King” on the high end (nearly $1.2 billion). While no blockbuster, “The Artist” – produced on an efficient $15 million budget, not including the Weinstein Company’s considerable marketing costs – already is an international success, having grossed $77 million to date.

Somehow, always, it seems appropriate to end an Oscar report with a profit statement.