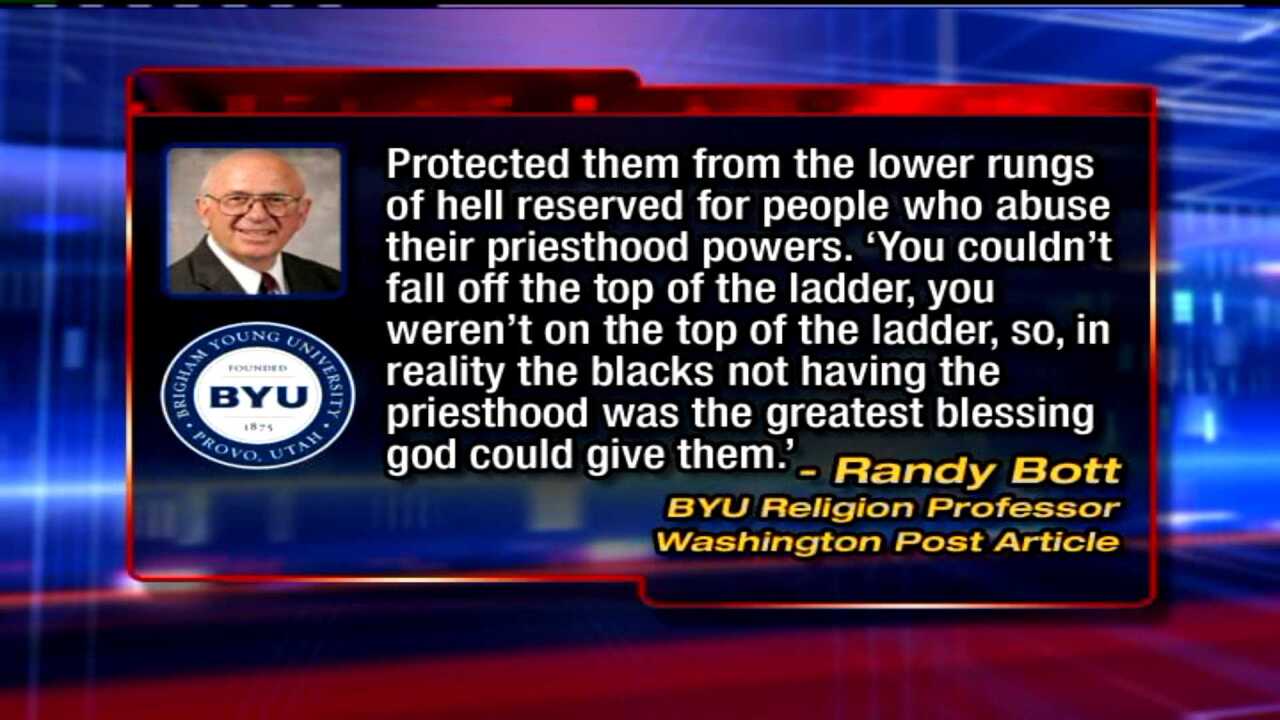 A religion professor at Brigham Young University has come under fire for comments he made regarding the LDS priesthood being extended to black males.

Randy Bott speculated in a recent Washington Post article that the previous ban on black males holding the priesthood was because they weren't ready; like a father denying car keys to a young child.

Bott's comments drew ire from Mormons and non-Mormons alike and an official statement was made by the LDS church refuting his claims.

Black members of the Church of Jesus Christ of Latter-day Saints had been restricted from holding the priesthood and could not participate in some temple ordinances until a 1978 revelation made to LDS President Spencer W. Kimball ended the racial ban.

Members of the LDS church believe that a person must be sealed in a celestial marriage in order to achieve the highest level of salvation, something that was prohibited to black members of the faith.

Bott argued that the denial of access to the highest level of salvation was a blessing to black members of the LDS church.

Bott talked of Mormon scriptures to explain why he believed blacks had been denied priesthood and full access to LDS rituals.

The LDS church issued a statement on Wednesday denying those claims.

"The positions attributed to BYU Professor Randy Bott...absolutely do not represent the teachings and doctrines of the Church of Jesus Christ of Latter-day Saints.  BYU faculty members do not speak for the Church.  It is unfortunate that the Church was not given a chance to respond to what others said," the statement read.

"It is not known precisely why, how, or when this restriction began in the Church but what is clear is that it ended decades ago. Some have attempted to explain the reason for this restriction but these attempts should be viewed as speculation and opinion, not doctrine."

BYU officials wouldn't say whether Bott will be disciplined for his remarks, but Terry Ball, Dean of Religious Education, said, "the comments attributed to Professor Bott do not reflect the teachings in the classroom at Brigham Young University."

Don Harwell, President of The Genesis Group, an organization created by the First Presidency of the LDS church in 1971 to serve the needs of African-American members of the LDS church, is upset by Bott's statement that banning blacks from the priesthood in 1978 was a benefit to them.

"He made a statement that God is discriminatory and I could not disagree with him more," said Harwell. "We're so childlike we're incapable of making good decisions? No, it was put on us that we were childlike as late as the 1960s."

Bott, however, had some supporters, including former students at BYU.

"In the New Testament, Christ tells his apostles not to preach the gospel to the Gentiles because they were not ready yet and later in Acts, Peter gets a revelation to reveal the gospel to the Gentiles. I think it's similar to that. We don't always understand why Heavenly Father does what he does but sometimes certain things are withheld from certain groups for reasons we don't understand," said Katie Francom, a BYU student.

Some students at BYU have put together a written response that will be passed out to students on Friday. The response isn't aimed at Bott, but at racism in general and on the BYU campus. There is also talk of a forum or panel discussion sometime next week.