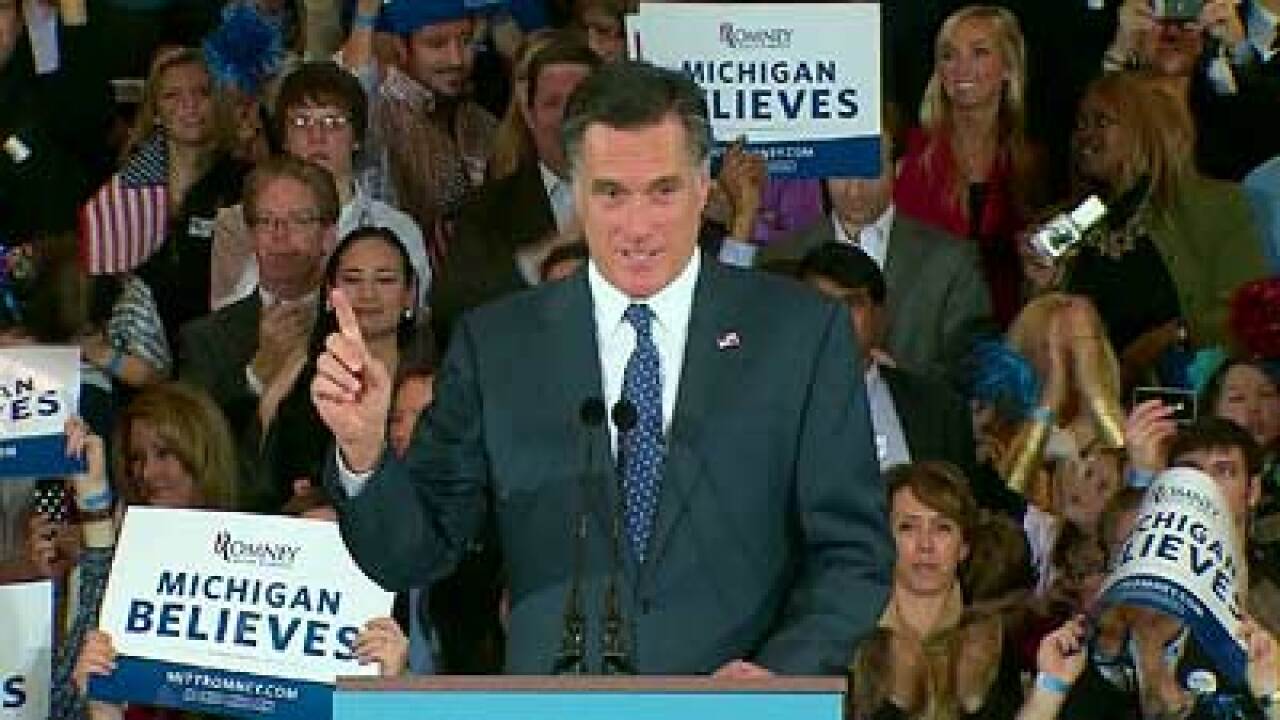 CNN — A relieved Mitt Romney is headed back to the campaign trail Wednesday after sweeping crucial primaries in Arizona and his childhood home of Michigan to revitalize his campaign for the Republican presidential nomination.

Romney needed to win both states, but especially Michigan — where he grew up when his father was governor — to assert his ability to overcome the conservative challenge from former Pennsylvania Sen. Rick Santorum.

A Santorum victory in Michigan would have raised questions about how strong a candidate Romney is within his own party.

By early Wednesday morning, the Michigan department of state had posted unofficial results from 80 of the total 83 counties. They showed Romney with 36% to 33% for Santorum.

Wayne County, home to Detroit, was not among the tallies, but numbers posted on its website also showed Romney with a sizable lead.

The state’s 30 delegates will be allocated on a proportional basis, and Romney and Santorum each won three so far, according to the returns. However, it was unclear who would win the most Michigan delegates, which are based on congressional districts.

Romney’s victory in Arizona was expected and more thorough. He had 47% to 27% for Santorum, 16% for Gingrich and 8% for Paul with 88% of the unofficial returns counted, according to the secretary of state website.

The result gave Romney all of the state’s 29 delegates in the winner-takes-all primary.

In a speech to supporters, Romney acknowledged he had to come from behind on his home turf in Michigan.

“A week ago, it was just a week ago, the pundits and the pollsters, they were ready to count us out,” he said of surveys showing Santorum leading in Michigan. ” … We didn’t win by a lot, but we won by enough and that’s all that counts.”

Santorum portrayed his Michigan defeat after leading in the polls as a better-than-expected performance in his main rival’s territory.

“This was going to be Romney’s night. The question was how big. And it wasn’t very big,” Santorum said.

The outcome showed it’s a “two-person race right now” with Romney, he added.

“A month ago, they didn’t know who we are, but they do now,” Santorum said, calling it “an absolutely great night.” “The people of Michigan looked into the hearts of the candidates, and all I have to say is ‘I love you back.’ ”

Santorum and Gingrich are vying for the support of conservatives to try to overcome Romney’s advantage in spending and organization.

The results Tuesday showed that combining the support for Santorum and the former House speaker would equal or exceed Romney’s support, a point certain to heighten the competition in coming weeks as the campaign heads toward Super Tuesday on March 6 and beyond.

In an attempt to capitalize on Michigan’s open primary in which any voter could participate, Santorum launched automated phone calls Monday asking Democrats to support him “to send a loud message to Massachusetts’ Mitt Romney.”

Liberal bloggers also asked Democrats and independents to vote for Santorum as a way of damaging Romney’s chances of winning the nomination.

Speaking to reporters in Livonia, Michigan, on Tuesday morning — his first news conference in nearly three weeks — Romney called the tactics by Santorum and Democrats “a real effort to kidnap our primary process.”

He called on Republicans to turn out “and say no to the dirty tricks of a desperate campaign.”

Santorum defended the calls to Democrats at a campaign stop Tuesday in Kentwood, saying Romney used the same tactics earlier when he encouraged New Hampshire Democrats to cross over to support him.

A majority of voters in New Hampshire, which Romney won last month, were independents or Democrats, Santorum said.

“And when he goes out and recruits folks who aren’t Republicans, that’s all right,” said Santorum, who later said of Romney: “That’s what bullies do — when you hit ’em back, they whine.”

However, it was Santorum who first complained of the crossover voting tactic in January, telling a Minnesota event that “We want the activists of the party, the people who make up the backbone of the Republican Party, to have a say in who our nominee is as opposed to a bunch of people who don’t even identify themselves as Republicans picking our nominee.”

He called for closed primaries with only Republicans allowed to take part “because it’s the Republican nomination, not the independent nomination or the Democratic nomination.”

Democrats who voted Tuesday said they didn’t need much convincing to support Santorum in order to weaken Romney.

Bruce Fealk said he voted for Santorum because he’s the weaker candidate.

“The idea is to help Obama get re-elected,” he said. “We want Mitt Romney to go bankrupt in Michigan.”

Romney attributed Santorum’s late rise in the polls to his recent “incendiary comments” about Obama, such as questioning the president’s theology and accusing him of snobbery for advocating higher education.

“We have seen throughout the campaign that if you are willing to say really outrageous things that are accusative and attacking of President Obama, that you are going to jump up in the polls,” Romney said. “You know, I am not willing to light my hair on fire to try and get support. I am who I am.”

The tough talk reflected the high stakes in Michigan. Romney has led nationwide polls off-and-on over the course of the campaign, but has been unable to increase his support base. Santorum is the latest of Romney’s rivals to challenge him for front-runner status by playing on conservatives’ reservations about the former Massachusetts governor.

Santorum’s hat trick earlier this month in Minnesota, Missouri and Colorado propelled him to a lead in national polls and a double-digit lead in Michigan two weeks ago. But he had a lackluster performance in last week’s CNN/Arizona Republican debate and has fallen into a statistical tie with Romney in national polls.

Both candidates spent most of their time following the last debate in Michigan, making it key showdown for both their efforts to establish momentum.

CNN chief political analyst Gloria Borger called Santorum’s focus on social issues in recent weeks “detours he didn’t need to take” from the economic message that resonates most with voters in a sluggish economy.

To David Gergen, CNN’s senior political analyst, Romney’s victories strengthened the narrative that his campaign is on an inevitable march to the nomination.

While noting it was “easy to see how Mitt Romney can lose this,” Gergen added that it was “very hard to see how any of his rivals can win it.”

Michigan and Arizona come four days before Washington state holds its caucuses on Saturday and a week before 10 states hold primaries and caucuses worth 437 delegates on Super Tuesday.

Santorum adviser John Brabender, who had downplayed expectations for his candidate in Michigan, noted that the 30 delegates at stake there were proportional, so a second-place finish with a decent delegate haul is just as good as a win.

For Gingrich, it’s all about Super Tuesday and Georgia, which he represented in Congress for more than two decades.

“I want to focus on winning in Georgia. I think it is essential to us to do that, and we are going to do everything we can between now and next Tuesday to win here at home,” Gingrich said last weekend while campaigning in the state.

However, Gingrich’s hopes of building a strong support base in the South after his lone victory in South Carolina appears in trouble. Santorum holds a big lead in polls in Tennessee, another Super Tuesday state.

Paul, the libertarian champion making his third bid for the White House, campaigned briefly in Michigan to try to win some delegates, but was mostly looking ahead to Washington state and Super Tuesday caucuses to try to increase his delegate count.

“We’ll continue to work in the caucus states” where investments of time and resources pay off in delegates, Paul said.