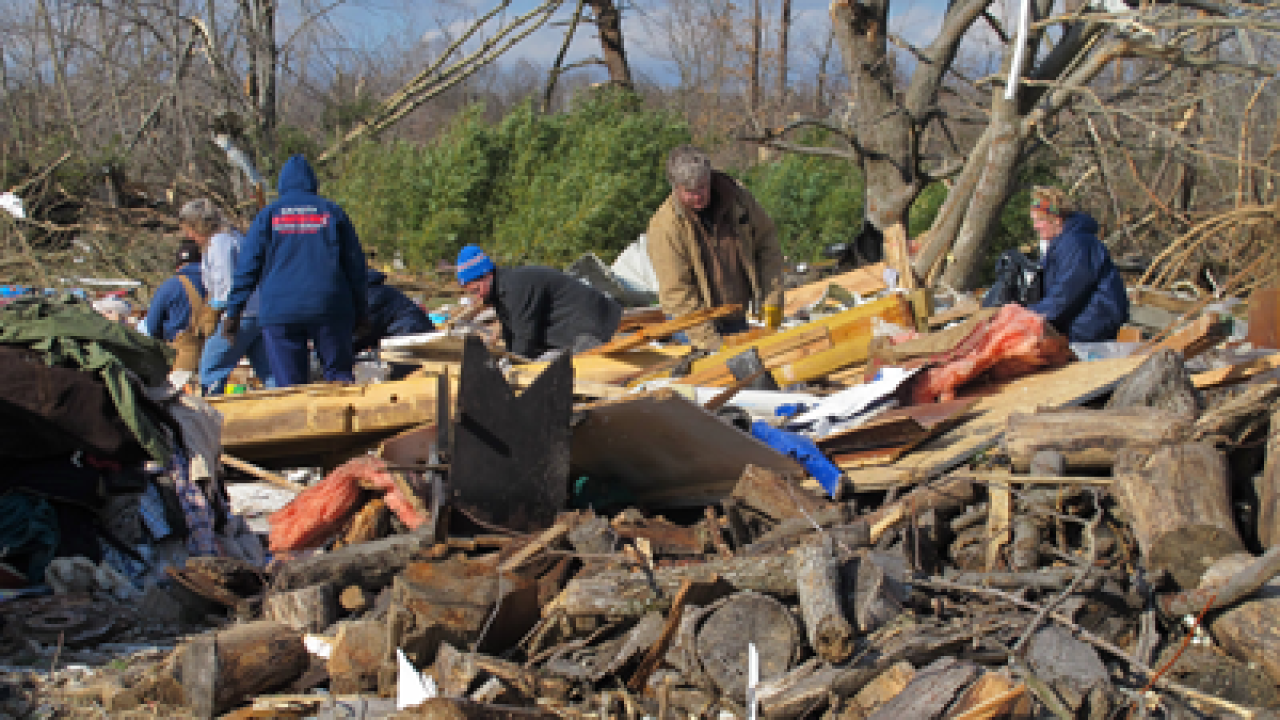 See photos of the damages from the storms

NEW PEKIN, Indiana (CNN) — As of Sunday evening, authorities were reporting that at least 39 people had died as a result of the severe weather, including 21 in Kentucky and 13 in Indiana.

With dozens dead, scores of buildings reduced to rubble and some communities all but obliterated, residents of the Midwest and South started assessing the devastation wrought by the series of vicious twisters.

The massive outbreak began Friday and extended into the next day, affecting about 17 million people from Indiana to Georgia.

The death toll from Friday’s severe weather now stands at 39 across five states: 21 in Kentucky, 13 in Indiana, three in Ohio and one each in Alabama and Georgia.

“It’s like a bomb went off and everything is splintered, bricks are down and trees, and (there’s) just a lot of debris,” Ohio Gov. John Kasich said after visits to Moscow and Bethel.

Many miles and many states away, others described similar scenes.

Piles of concrete and wood remained strewn across the landscape of what used to be homes. Tall, once sturdy trees littered the ground. Bright yellow school buses smashed into buildings. Garbage bins and wooden beams, which had flown through the air like a jet airliner, resurfaced hundreds of yards away.

The center of West Liberty, Kentucky, transformed into a ghost town after a twister ripped through buildings and flipped police cars along Main Street.

“There ain’t nothing left of this town. It’s just a tragedy,” resident David Wilson said.

In Henryville, Indiana, about 20 miles north of Louisville, an EF-4 tornado — with sustained winds of between 166 mph and 200 mph, putting it in the top 2% of tornadoes in terms of its strength — struck a school complex.

National Weather Service meteorologists said it was one of two tornadoes that hit the town Saturday, crediting the early dismissal of students with preventing more fatalities.

Elementary school principal Glenn Riggs said the 40 students who had remained and huddled in an office area were OK.

Nearby, Pamela Rawlings described how her parents went to the middle of their one-story home for safety. After a tornado ripped through, a neighbor rushed over to find the long-time couple about 30 feet apart — with Pamela’s 64-year-old father, Wayne Hunter, discovered dead and her mother, Lenora, bloodied but alive.

“Whether you wanted to laugh or not, he always put a smile on your face,” Rawlings said of her dad.

In Chelsea, east of Henryville, Steve Kloepfer told WHAS that the bodies of his aunt and uncle, Terry and Carol Jackson, and their 4-year-old grandchild were discovered in a field, covered in debris. His own home, he said, was in rubble.

In addition to the dead, hospitals continued to treat scores suffering from major trauma to minor injuries related to sudden ferocious spurts of high winds, powerful hail and drenching rains.

They included a 20-month-girl found alone in a field Friday night in Salem, about 20 miles west of Henryville.

The toddler was in critical condition, surrounded by extended family members at Kosair Children’s Hospital in Louisville, said hospital spokesman Brian Rublein. Her immediate family — including her parents, 3-year-old brother and 2-month-old sister — were all killed in the storm. She died Sunday evening.

By Saturday evening, expectations had diminished that more survivors or dead would be found.

The focus turned to caring for survivors whose lives were turned upside down by the storm.

Indiana State Police Sgt. Jerry Goodin said the destruction left authorities there with “no idea how many people are left homeless.”

“There are a lot of people who can’t sit down on their own couch this evening,” Goodin said Saturday.

President Barack Obama offered his condolences and federal assistance if needed to the governors of Indiana, Kentucky and Ohio, the White House said in a statement.

About 250 National Guard troops were deployed in Indiana, with 220 more dispatched to Morgan County, Kentucky, according to state officials.

Beyond immediate goals of providing safety and security, as well as finding places to sleep for those who had been displaced, residents and officials from West Liberty to Henryville and beyond voiced a common desire to preserve and rebuild their communities.

“We’re knocked down, but we’re not knocked out,” said Kasich, the Ohio governor. “We’re going to get through it.”