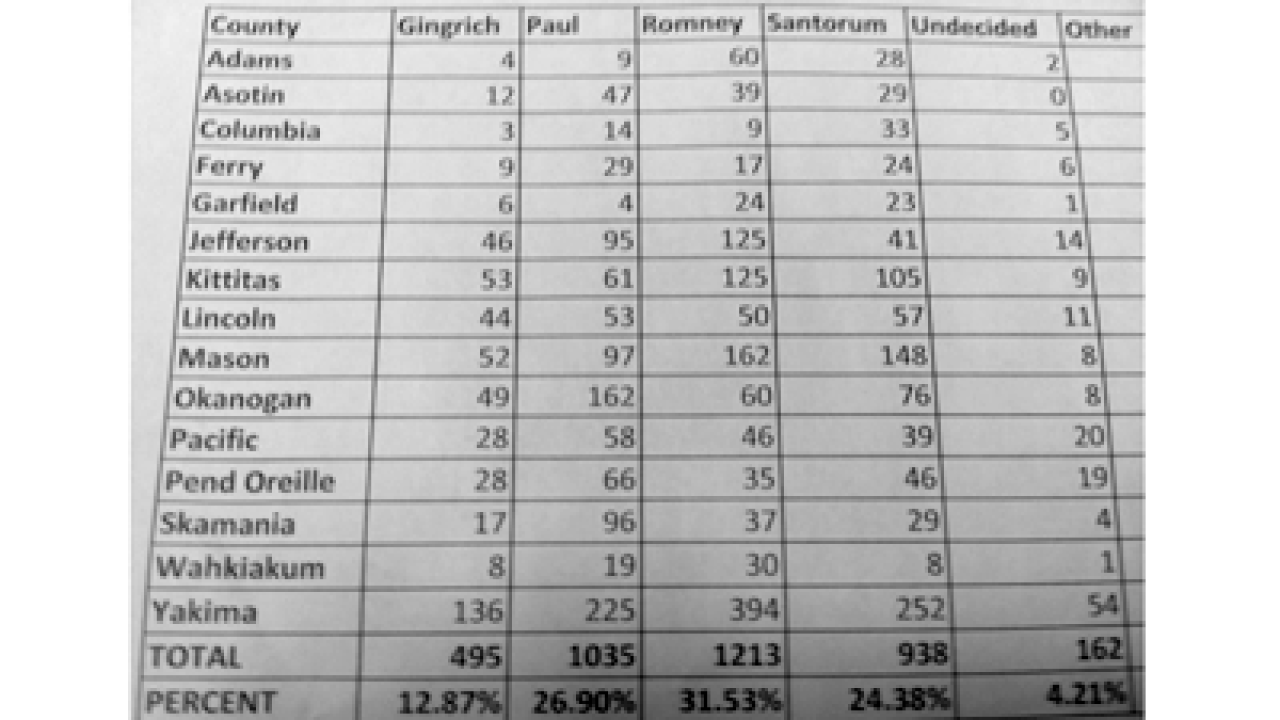 With more than 60% of the vote in, Romney had 37% while Texas Rep. Ron Paul and former Pennsylvania Sen. Rick Santorum were tied for second with 24%. They were trailed by former House Speaker Newt Gingrich at 11%.

At stake in the contest are 40 delegates.

"We're in a good second place, but the good news is we're doing very, very well in getting delegates," Paul told supporters in Seattle, when about half of the vote had been counted. "The enthusiasm for the cause of liberty continues to grow exponentially."

Washington's caucuses come just three days before Super Tuesday, when 10 states hold primaries and caucuses. And because of that, all four major GOP presidential candidates campaigned in the state, hoping a strong finish there would carry over to Tuesday.

Before CNN's projection was announced, state GOP chairman Kirby Wilbur predicted a win for either Romney or Paul. He also reported a large turnout.

Even as caucuses began Saturday in Washington, the focus was shifting to Super Tuesday states. Romney campaigned in Cincinnati, Ohio, where he took aim at President Barack Obama.

Romney got a boost earlier this week from wins in Arizona, Wyoming and Michigan. His win in Washington would be his eighth this election cycle.

Santorum similarly campaigned in Ohio, telling an audience in the town of Blue Ash, "This was the industrial heartland of the country. They now refer to it as the Rust Belt. After ... I take the corporate tax for manufacturers, eliminate it, cut it to zero -- we're going to be the stainless-steel belt across this country."

But in the days before the caucuses, the attention was on Washington state, as all four candidates made the long trip to the Pacific Northwest.

"This is the first time any one GOP presidential candidate has paid attention to us in recent memory, and my memory goes back to the 1970s," Wilbur told CNN. "We used to be the ugly sister invited to the dance, but no one asked to dance. Now we are the princess."

Wilbur said that the state's contest used to follow Super Tuesday, when in most cycles the battle for the nomination was basically over.

Santorum, campaigning Thursday in Pasco, told supporters, "You are the voice that is going to speak very loudly before Super Tuesday and put this race on a whole other plane."

Romney, who campaigned in Washington on Friday, sounded a similar theme.

"There are a bunch of states that are going to make up their minds on Tuesday, but you guys are first, and so your voice is going to be heard," Romney said at a campaign event in Bellevue.

Paul campaigned in Washington two weeks ago and was back in the state Friday and Saturday. He also was running campaign commercials in Washington, as was Gingrich, who made a swing through the state last week.

The caucuses, which kicked off Saturday morning, are open, meaning independent voters and Democrats can take part in the GOP contest.

While some smaller caucus meetings were held in private homes, most gatherings were larger and held in public places, such as schools, and included multiple precincts.

Besides voting for delegates, caucus-goers voted in a nonbinding GOP presidential preference straw poll. While delegates to the GOP convention in Tampa, Florida, won't be determined until later rounds of voting this spring, major news organizations, including CNN, will make proportional delegate estimates based on Saturday's presidential straw poll results.

The state GOP projected that 40,000 to 60,000 people would take part in the caucuses, up from the 12,616 who participated in the 2008 Republican caucuses. There was also a primary on the Republican side four years ago, with around a half million voters casting ballots.