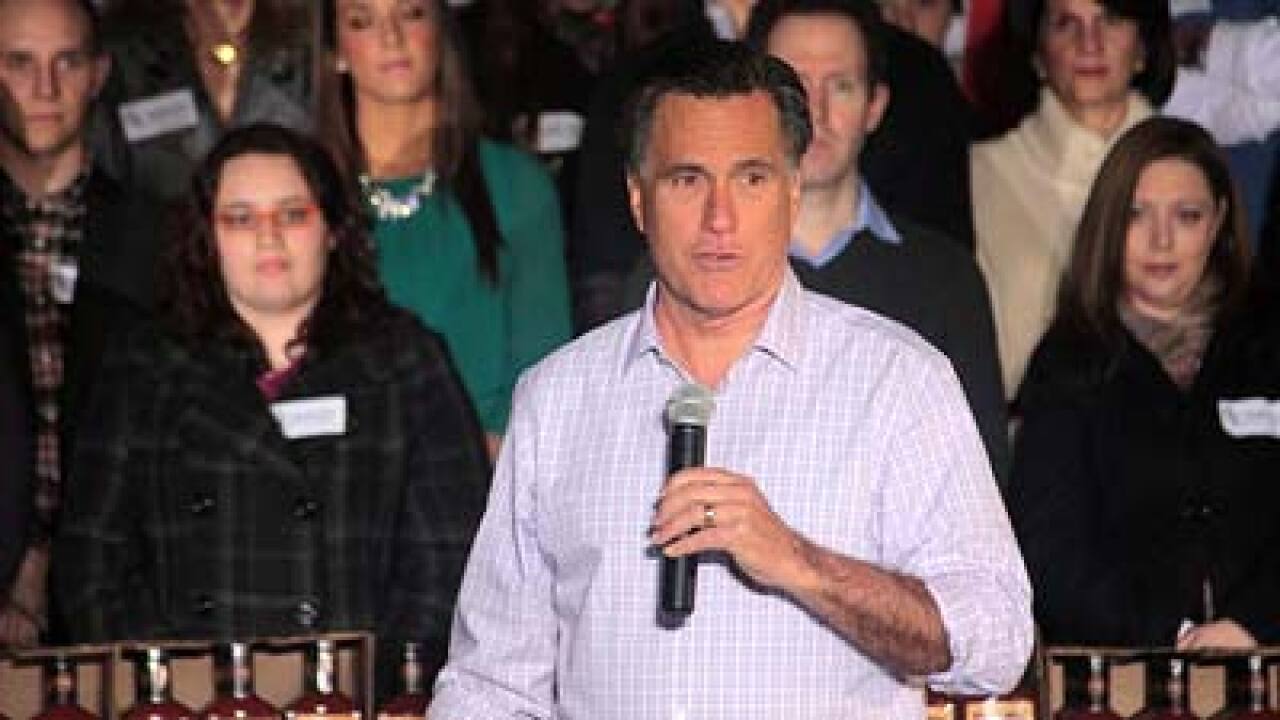 COLUMBUS, Ohio (CNN) — For former Massachusetts Gov. Mitt Romney, who’s riding the wave of three wins in a week, Super Tuesday provides an opportunity to break away from his rivals in the Republican presidential race.

In all, 419 delegates are up for grabs when 10 states hold primaries and caucuses — more than all the contests to date combined, and more than a third of the 1,144 delegates needed to clinch the nomination.

Georgia has the most delegates up for grabs on Tuesday but Ohio, because of its status as a crucial battleground state in the general election, is getting the most traffic on the ground and on the airwaves from Romney and his chief rival, former Sen. Rick Santorum.

A CNN/ORC International poll released Monday indicates that Ohio is a dead heat between Romney and Santorum, with each grabbing 32% of likely GOP primary voters. Former House Speaker Newt Gingrich was at 14% and Rep. Ron Paul of Texas was at 11%.

The CNN/ORC survey was the fifth released on Sunday and Monday to indicate a tie. Surveys released a week ago suggested that Santorum led Romney, but they were conducted before Romney’s large victory last Tuesday in Arizona and his edging out of Santorum to win his native Michigan.

Campaigning in Ohio on Monday, Romney sounded confident, saying, “I believe I am doing well at this stage. Actually, we just won our fifth state in a row which is good news.”

In addition to Arizona and Michigan, Romeny picked up a win Saturday in Washington state’s caucuses, as well as caucuses earlier in February in Wyoming and Maine.

But Eric Fernstrom, a top Romney adviser, on Sunday downplayed Ohio’s importance, saying, “I don’t think any state is a must-win. I think the only must-do on a candidate’s checklist is getting 1,144 delegates.”

But a look at where the campaigns are placing their advertising is evidence of Ohio’s importance.

“When it comes to the air war, Super Tuesday is really Super Ohio. Although ads are running in Tennessee and Georgia, more attention is being paid to Ohio,” said Kenneth Goldstein, CNN’s consultant on TV advertising and president of Campaign Media Analysis Group, a company that tracks and estimates the costs of campaign ads running on the air.

“When all is said and aired, like in previous states, the Romney campaign and their allies will have a large advantage.”

A leading GOP strategist thinks if Romney does well across the board on Tuesday night, he could come close to locking up his bid for the nomination.

“Even a come-from-behind win in Ohio won’t give Romney the momentum he needs to put this race away, but Romney could seal this deal Tuesday if he takes not only Ohio, but Tennessee,” said CNN contributor Alex Castellanos.

“If Romney demonstrates he can win in the South, GOP establishment and conservative voters will rally around him and money for his opponents would begin to dry up,” added Castellanos, who was a top media adviser for Romney’s 2008 nomination bid but who is not taking sides this cycle. “The real test Tuesday is this: Can Romney win not only in Ohio but in the South?”

Thanks to a sweep of contests in Colorado, Minnesota, and Missouri on February 7, Santorum went from a long shot candidate to a co-frontrunner, but he hasn’t had a victory since.

“Given Romney’s current string of victories, Santorum must show some signs of life, while not allowing Gingrich to do so in the South,” Heye said.

“Simply put, he needs to stop the bleeding after three straight losses by winning several states of his own — including the big one in Ohio,” said Gentry Collins, a former political director for the Republican National Committee and the Republican Governors Association.

“This will be important for Santorum for a couple of reasons: First, it’s likely Romney will have several state wins to his name. Second, Santorum will need a diversion from the fact that he will likely be significantly outclassed in the delegate count — which is what matters most now,”

It’s not just Ohio where Santorum has lost his lead. Polls indicate the same thing has happened in Tennessee.

“If Santorum wins one or two, but fewer than Romney and the narrative becomes his campaign was too inept to make the Virginia ballot or several districts in Ohio, he’s in trouble. Remember, Republicans are hungry for a winner against Obama. If the stench of incompetence sticks to him, he’s toast,” added Collins, who ran Romney’s 2008 operation in Iowa but who is neutral this time around.

Santorum appears to be lowering expectations, saying on “Fox News Sunday” that Ohio is “a tough state for us only because of the money disadvantage. But we got a great grassroots campaign. We are hanging in there and we feel very confident that we will do well.”

He also seemed to be blaming Gingrich for his loss in Michigan.

“If you continue to combine the votes that Congressman Gingrich and I get, we are doing pretty well. In Michigan we would have won easily had those two votes been combined.”

Gingrich is expected to win Georgia, where he represented the state’s sixth congressional district for 20 years. The CNN poll indicates Gingrich is enjoying home field advantage, with a 23-point lead over Romney in the state. Gingrich is at 47% among likely GOP primary voters, with Romney at 24%, Santorum at 15% and Paul at 9%. Other recent surveys in Georgia also showed Gingrich with a double-digit lead.

“I’m very confident that, in the larger state that is going to vote Tuesday, Georgia, which has more delegates than any other state, we’re going to win a very, very decisive victory,” Gingrich told CNN’s Candy Crowley on Sunday on “State of the Union.”

“Super Tuesday may not do much to change the Santorum-Romney dynamic. Either could probably sustain a mediocre night,” she said. “And Ron Paul doesn’t need a splashy win to keep a movement alive. In the end, Super Tuesday looms larger for Gingrich than for anyone else.”