The suspect in a Uintah County manhunt is in custody Saturday afternoon.

Uintah County Sheriff's Chief Deputy John Laursen says that police had received information that Rowley was in the White River area, located approximately 40 miles south of Vernal, and concentrated their efforts in that area on Saturday.

Uintah County Sheriff Jeff Merrell took Rowley into custody without incident just before 3 p.m. Saturday. The Uintah County Sheriff's Office said Saturday evening that Merrell was patrolling in the area with the Special Emergency Response Team of the Utah Division of Natural Resources when he saw the suspect's 1999 Chevrolet Suburban.

While waiting for SERT officers, Merrell saw the suspect vehicle starting to move. He blocked the vehicle and was able to remove Rowley from the vehicle and take him into custody.

"When I showed up that gave him the opportunity to surrender in a peaceful manner," said Merrell. "He saw me, recognized me and drove out to me and surrendered himself to me."

"Yes, it could have gone on indefinitely. Ultimately, we got extremely lucky or it would have been his call when he gave up," said Laursen.

Rowley is now in the Uintah County Jail on charges of attempted criminal homicide, aggravated murder and failure to respond to an officer's signal to stop. His bail has been set at $500,000.

A Uintah County Sheriff's deputy stopped a vehicle on Old Red Wash Road, about ten miles south of Vernal, around 9 p.m. Thursday. The deputy said when he approached the car, he smelled alcohol on the Rowley's breath. Police say Rowley refused to step out of the car and took off.

After a short chase, police say Rowley slowed down and started to pull over. He allegedly fired several shots from a rifle at the deputy's truck. None of the shots hit the deputy, but the bullets went through the windshield and hood of the truck, disabling it.

"He was uninjured in the altercation, except for some flying glass from the windshield," said Laursen.

Police and deputies from agencies all over Utah searched via helicopter and on land Thursday night, through Friday and Saturday morning for Rowley before locating him.

"[Rowley] loves the outdoors -- that area [Book Cliffs] is something he goes to all the time. He's very familiar with most of it," said Laursen. "So, if he wants to hide, it's going to be a challenge."

Rowley will likely have his first court appearance next week. 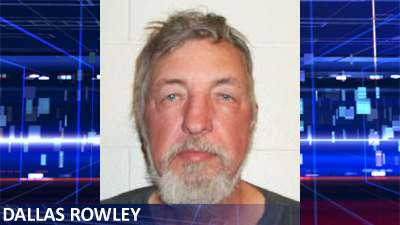