Ogden Police say the crash happened just before 6 a.m. at the intersection of 15th Street and Harrison Blvd.

Witnesses told Ogden Police that a UTA bus ran a stop sign, slammed into the vehicle, and almost pushed the southbound traveling SUV across the intersection. The vehicles hit a tree, destroyed part of the street curb and stopped short of hitting a house.

"Both vehicles were pushed into the front yard of the house on the southeast corner of the intersection, both vehicles received extensive damage," said Ogden Police Lt. Danielle Croyle.

Both male drivers had to be cut out of their respective vehicles and were taken to the hospital in critical condition. There were no other passengers in either the SUV or the bus.

Harrison Blvd. is typically a busy street and police say it is fortunate the accident happened early in the morning or it may have been much worse.

"It is on a route that is the sidewalk and stuff, kids do travel to the high school. But due to the hour, there were no additional bystanders or injured persons involved," said Croyle.

Police are investigating the cause of the accident. It is also unknown how fast the bus was traveling. 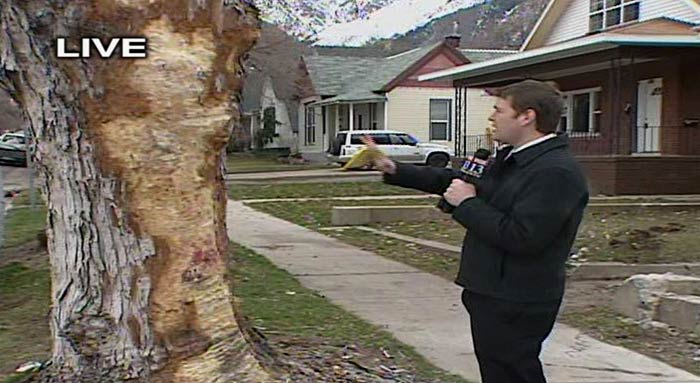