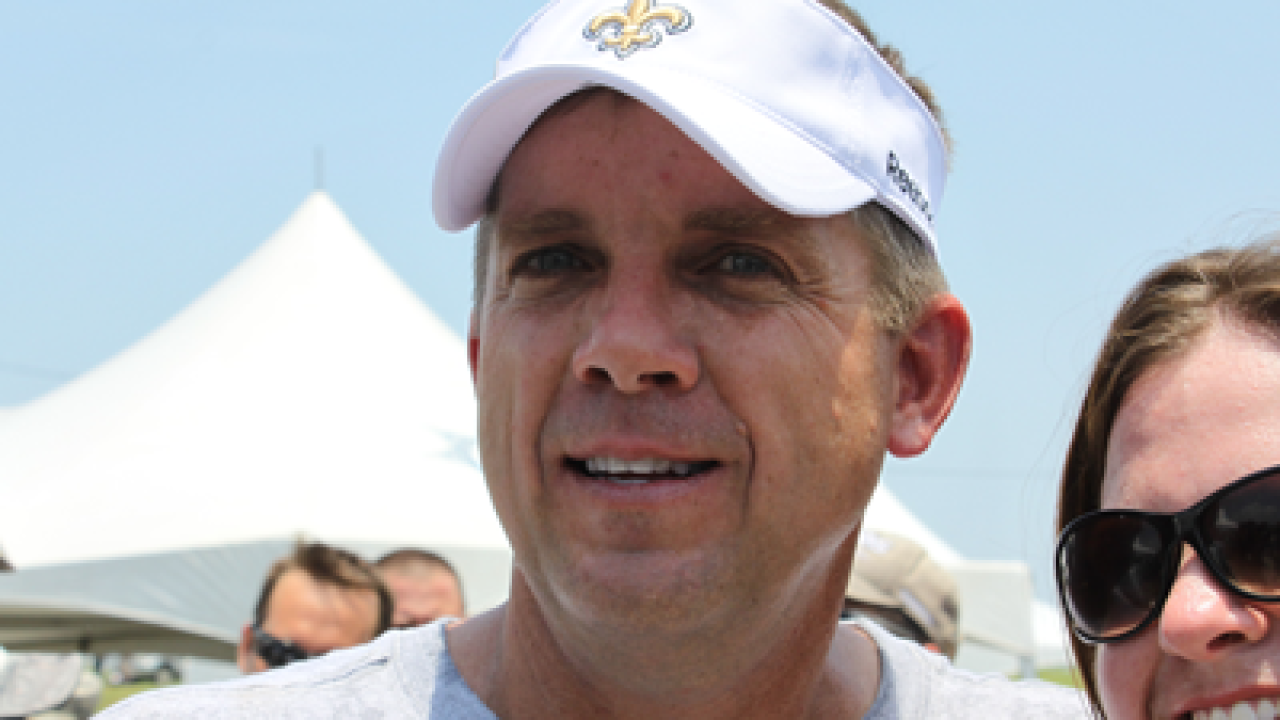 (CNN) — In sweeping discipline that one analyst called “historic,” New Orleans Saints Head Coach Sean Payton was suspended without pay for the entire 2012 season and former Saints defensive coach Gregg Williams was suspended indefinitely in a series of NFL punishments Wednesday for the team’s bounty program against opponents.

Under the bounties, the team paid bonuses for knocking opposing players out of a game, the NFL said.

NFL Commissioner Roger Goodell will review the status of Williams, now with the St. Louis Rams, at the end of the season and whether to reinstate him, the league said.

In issuing the punishments, Goodell described the Saints’ violations of league rules “particularly unusual and egregious.” He added that “a strong and lasting message must be sent.”

Goodell said he is reviewing with the NFL Players Association discipline for players involved in the bounty program and he will address the matter at a later date.

One sports analyst, Jim Trotter of Sports Illustrated, said the discipline is “historic.”

“One of the reasons they could be so strong against the Saints was that there was a paper trail,” Trotter said, referring to e-mails.

“I don’t think other teams would be dumb enough to put it in writing,” Trotter said of the bounty system. “I definitely believe they are trying to make an example of them.”

“The league has to be concerned about lawsuits,” Trotter said.

The NFL investigation found the Saints had an “active bounty program” during the 2009, 2010 and 2011 seasons in which “bounty” payments were paid for “knock-outs” and “cart-offs” — plays in which an opposing player had to leave the game, the league said in a statement. The bounties even identified specific players as targets, the league said.

The investigation found that the Saints showed “a deliberate effort to conceal the program’s existence from league investigators, and a clear determination to maintain the program despite express direction from Saints ownership that it stop as well as ongoing inquiries from the league office,” the NFL said.

Goodell said the “pay-for-performance” program “undermined the integrity of the game.”

The league found that Payton, as head coach, failed to supervise players and coaches, didn’t inquire into the facts of the bounty program though he was aware of the league’s inquiries, and encouraged “the false denials by instructing assistants to ‘make sure our ducks are in a row,’ ” the NFL statement said.

Added Goodell: “When there is targeting of players for injury and cash rewards over a three-year period, the involvement of the coaching staff, and three years of denials and willful disrespect of the rules, a strong and lasting message must be sent that such conduct is totally unacceptable and has no place in the game.

“Beyond the clear and continuing violations of league rules, and lying to investigators, the bounty program is squarely contrary to the league’s most important initiatives — enhancing player health and safety and protecting the integrity of the game,” the commissioner continued.

“Let me be clear. There is no place in the NFL for deliberately seeking to injure another player, let alone offering a reward for doing so,” Goodell said.

On his Twitter account, Saints quarterback Drew Brees wrote: “I am speechless. Sean Payton is a great man, coach, and mentor. The best there is. I need to hear an explanation for this punishment.”

But he said Williams was “surprised and shocked.”

Fisher said the Rams had no idea when they hired Williams “that this would happen.”

“He made a mistake and he admitted to that mistake and he’s remorseful and he regrets the decision he has made and he has accepted the consequences,” Fisher said of Williams.

On Wednesday, the NFL laid out a narrative of the Saints’ bounty program.

Players regularly made cash “donations” to a pool and were also “fined” for mental errors, loafing, and penalties, the NFL probe found.

At least one assistant coach, Williams, also occasionally contributed to the pool, but the NFL found no evidence that any team money went to the fund.

Payments were made for plays in which opposing players were injured and for interceptions and fumble recoveries, the NFL said.

Several players pledged money for bounties on specific opponents, “with defensive captain Jonathan Vilma offering $10,000 to any player who knocked Brett Favre out of the NFC Championship Game in 2010,” the NFL said.

In the three seasons of the bounty program, the Saints were among the top five teams in roughing-the-passer penalties and ranked in the top six teams for unnecessary roughing penalties, the NFL said.

In a January 2010 playoff game, Saints defensive players were fined $15,000 for fouls against the Arizona Cardinals, and in the NFC Championship against the Minnesota Vikings, the Saints defense was fined a total of $30,000 for four separate illegal hits, several of which were directed against quarterback Favre, the NFL said.

Assistant head coach Vitt acknowledged to investigators that the teams’ “defensive meeting preceding the 2010 NFC Championship Game may have ‘got out of hand’ with respect to Brett Favre,” the NFL said.

A document written after a preseason game stated “1 Cart-off — Crank up the John Deer (sic) Tractor” in reference to a hit on an opponent, the NFL said.

“Similar statements are reflected in prepared documents or slides in connection with other games in multiple seasons. A review of the game films confirms that opposing players were injured on the plays identified in the documents,” the NFL said.

Last year, prior to the opener, head coach Payton “received an e-mail from a close associate that stated in part, ‘PS Greg Williams put me down for $5000 on Rogers (sic),’ ” the NFL said.

Payton told investigators that the e-mail referred to a “bounty” on Green Bay quarterback Aaron Rodgers, the NFL said.

Then defensive coach Williams “acknowledged that he designed and implemented the (bounty) program with the assistance of certain defensive players” after being told by Payton to make the defense “nasty,” the NFL found.

Williams kept records, determined the amount and recipients of the payouts, and distributed the “envelopes with cash to players who ‘earned’ rewards,” the NFL said.

But Williams was first questioned about the bounty program in early 2010, “he intentionally misled NFL investigators and made no effort to stop the program after he became aware of the league’s investigation,” the NFL said.