36-hour face transplant ‘most extensive’ ever 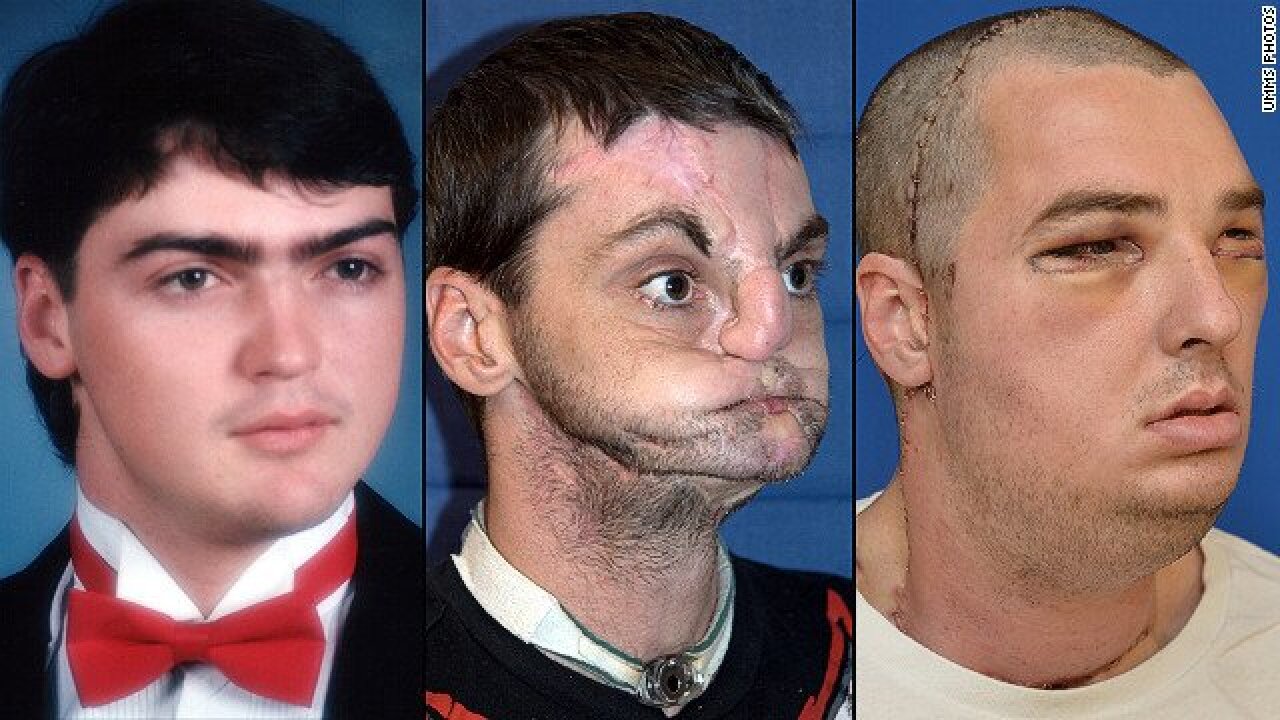 (CNN) — A 37-year-old man received an extensive face transplant stretching from his hairline down to the neck, including a jaw, full set of teeth, tongue and cheeks. The surgery essentially replaced most of the patient’s face except for his eyes and the back remnant of his throat.

Richard Lee Norris of Hillsville, Virginia, is the 23rd patient to receive a face transplant in the world. His doctors at the R. Adams Cowley Shock Trauma Center at the University of Maryland Medical Center say this operation is the most extensive surgery of its kind because of the extent of the transplant and the placement of an entire set of teeth.

“The face will look like a blend of the donor as well as Richard,” said Dr.Eduardo D. Rodriguez, associate professor of surgery at the University of Maryland School of Medicine. “There are some unique features, his nose, the chin that have been replaced in entirety. Other than that, it’s a combination of both individuals.”

The hospital did not release details about the anonymous donor, due to the family’s request. The family specifically consented to the face transplant procedure. His heart, lungs, liver and kidneys were used to save the lives of five other patients, according to the hospital.

Norris’ new face extends from the top of his head down to his clavicle. The lines between his skin and the donor’s can be seen on his chest and his scalp, but they cannot be seen on his face. The doctors involved in his operation said they concealed the lines as far back as possible and included the teeth so Norris could chew normally.

After a gunshot injury in 1997, Norris lost his lips, nose, portions of his mouth and the front portion of his tongue. His tongue fused to the bottom of his mouth and he wore a trachea tube to breathe. Despite receiving several surgeries and reconstructive procedures, he wore a mask to hide his face for the last 15 years.

During surgery, doctors rebuilt his facial structure using the skeletal framework from the donor — including the cheekbones, chin and various tissues, such as blood vessels and muscles.

Three days after the surgery, Norris wanted to see a mirror, his doctor said.

“He was there with his parents,” Rodriguez said. “It was one of the most emotional moments. He put the mirror down and thanked me and hugged me. We’re going to restore the 15 years he lost and make him a functioning member of society.”

After the surgery, Norris has been able to open and close his jaws, use his tongue, close his eyes, shave and brush his teeth. The patient is still hospitalized and was not present at the press conference Tuesday.

Like all transplant patients, Norris takes drugs to weaken his immune system so his body won’t reject the new tissue. This puts patients at risk to some extent because their immune systems are not as strong and more susceptible to infections. His doctors say because Norris received a transplant that included vascularized bone marrow in the jaw, there is a potential he may not need as much anti-rejection medication as standard patients. But that remains to be seen.

“The goal would be never to remove full medication,” said Rodriguez. “Ideally, we can reduce the amount of immune suppression way down the road.”