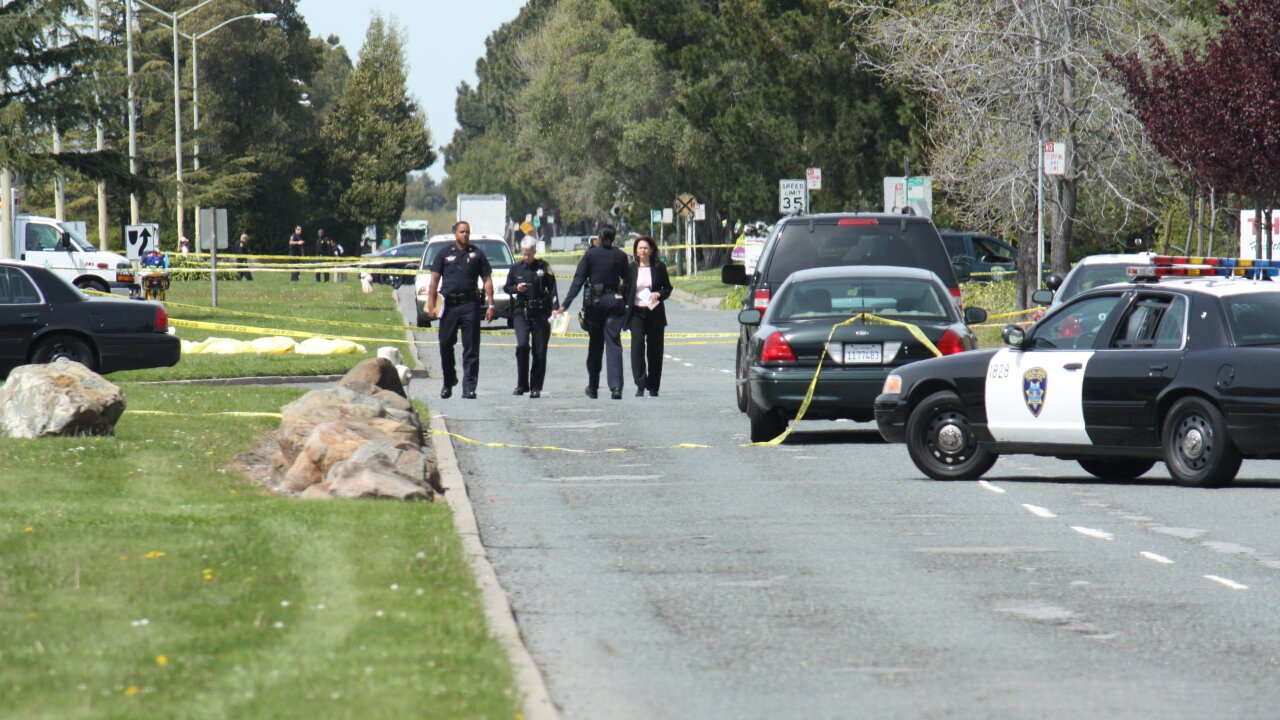 Law enforcement officers respond to a mass shooting at Oikos University in East Oakland, California on Monday, April 02, 2012. According to a police official nine had been shot at the private Christian college and six have been pronounced dead. Bodies draped in yellow are visible on the ground to the left of the frame.

(CNN) — Police in Oakland, California, took a 43-year-old former student at a small religious college into custody Monday after a shooting spree at the school that left seven dead and three wounded, the city’s police chief said.

The motive behind the killings at Oikos University in East Oakland remained a mystery Monday night, Oakland Police Chief Howard Jordan told reporters. Detectives had not yet questioned the suspect, identified as One Goh, and no charges had been filed, he said.

“With a case of this magnitude, with all the victims and witnesses and all the chaos, it’s going to take a few days to put the pieces together,” Jordan said.

The college, which caters to the Korean American Christian community, offers degrees in theology, music, nursing and Asian medicine, according to its website. Oakland Mayor Jean Quan said most of the victims appeared to be from the city’s Korean-American community, and the city was working to find multilingual counselors to help survivors.

“No American mayor wants to have this situation,” she said. “It seems over the last decade, we’ve gotten used to seeing senseless mass killings like this, and we’ll have to question the availability of guns and the need for other services in our community.”

Gunfire erupted inside the single-story building that houses the private Christian college about 10:30 a.m. A witness, Brian Snow, said he was at a nearby credit union when shots rang out, “and it started getting chaotic.”

“In Oakland, sometimes things like that happen, but it dies over,” he said. But this time, he said, “I went outside and the cops were coming and like ‘Don’t move, don’t move,’ and it started getting chaotic … a pedestrian came out with a bullet hole and I was like, ‘Getting really crazy right now.’ ”

Lucas Garcia, who was teaching an English class at the college when the rampage began, told CNN affiliate KGO-TV that he counted about six gunshots from a nearby nursing classroom. Garcia said he heard someone yell, “He’s got a gun,” and he got his students out of the building while the gunfire continued.

Jordan said the relationship between the suspect and any of those shot remained unknown Monday night, as detectives combed over “a very bloody scene with lots of evidence.”

“Initially, we were told he was in a classroom when he stood up and began shooting at the victims,” Jordan said.

Several of the survivors, including the wounded, hid behind locked doors or desks as the shooting went on. The suspect took one of the victims’ cars and drove off, but surrendered to police at a Safeway grocery in the Oakland suburb of Alameda a short time later, Jordan said.

California Gov. Jerry Brown, who served as Oakland’s mayor from 1999 to 2007, called the killings “shocking and sad.”

“Our thoughts and prayers go out to the victims, their families and friends and the entire community affected by this senseless act of violence,” Brown said in a statement issued by his office.