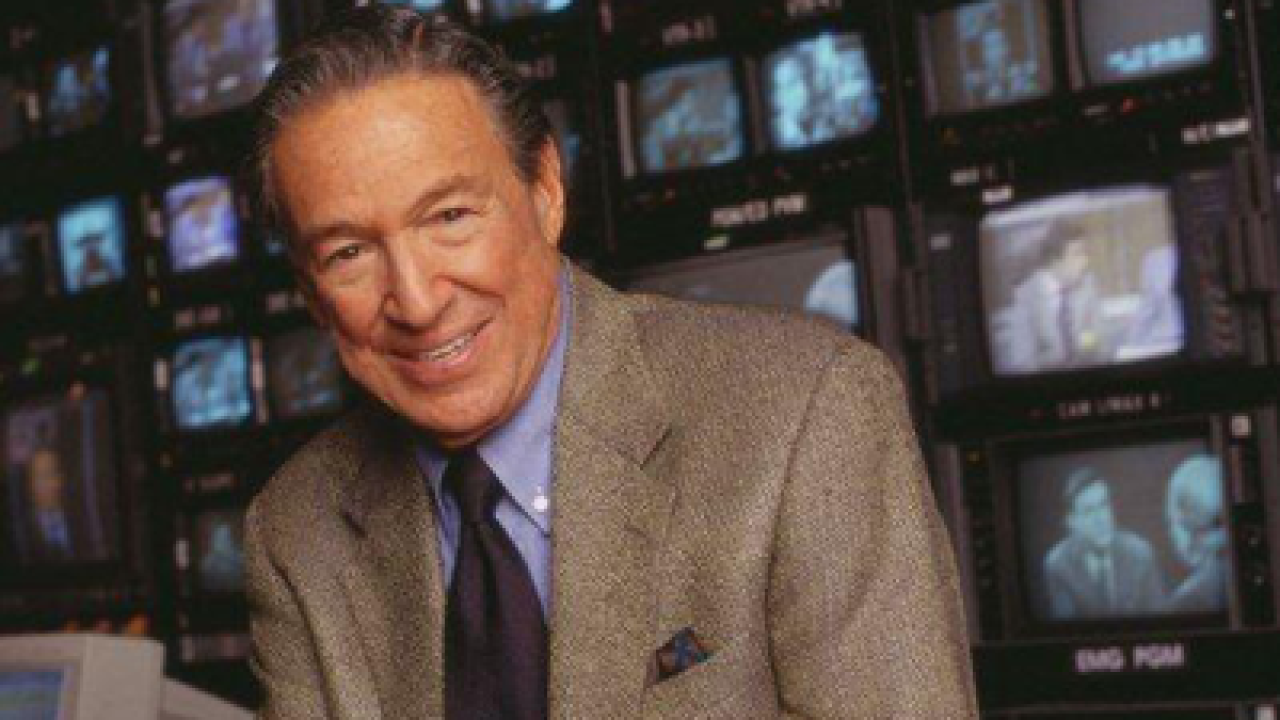 (CNN) — Mike Wallace, who spent four decades as a hard-hitting, provocative news correspondent on “60 Minutes,” has died, CBS reported Sunday. He was 93.

Wallace died Saturday night “peacefully surrounded by family members at Waveny Care Center in New Caanan, Connecticut, where he spent the past few years,” CBS said in a statement.

“For half a century, he took on corrupt politicians, scam artists and bureaucratic bumblers,” CBS News said on its website. “… Wallace took to heart the old reporter’s pledge to comfort the afflicted and afflict the comfortable. He characterized himself as ‘nosy and insistent.'”

“It is with tremendous sadness that we mark the passing of Mike Wallace,” said Leslie Moonves, president and CEO of CBS Corporation. “His extraordinary contribution as a broadcaster is immeasurable and he has been a force within the television industry throughout its existence. His loss will be felt by all of us at CBS.”

“Mike was an unbelievable journalist,” said Scott Bronstein, CNN senior investigative producer, who worked with Wallace as a “60 Minutes” staff producer during the late 1990s. “He was inspiring. He made you want to do your best work. He always demanded you to report more and more. He was such a marvel, the way he could do an interview.”

“They didn’t come any better,” King said. “He was a glorious human being, a wonderful raconteur, a great journalist, a great host, an interviewer with his own style … Mike Wallace was a guy, when he’s on, you can’t hit the clicker.”

Wallace was already a veteran of the “CBS Morning News with Mike Wallace” and had covered most of the 1960s’ major news stories, including several assignments to Vietnam, when he was hired as a correspondent for the new television show “60 Minutes.”

The show debuted in September 1968. During Wallace’s four-decade career on “60 Minutes,” he “sealed his reputation as a hard-charging, no-holds-barred interviewer,” according to the Knight-Wallace Foundation at the University of Michigan, of which Wallace was a supporter.

“His most memorable moments at ’60 Minutes’ have often been news-making events in their own rights.”

“There were very few 20th century icons who didn’t submit to a Mike Wallace interview,” CBS said. “He lectured Vladimir Putin, the president of Russia, on corruption. He lectured Yasser Arafat on violence. He asked the Ayatollah Khomeini if he were crazy.”

In 2006, Wallace became a correspondent emeritus for “60 Minutes” and stopped appearing regularly. In 2008, he underwent successful triple-bypass heart surgery.

“I’ve often replied, when asked, ‘I’ll retire when my toes turn up,'” he said in a statement at the time. “Well, they’re just beginning to curl a little, which means that as I approach my 88th birthday, it’s become apparent to me that my eyes and ears, among other appurtenances, aren’t quite what they used to be.”

The prospect of long flights to cover news was not as appealing, he said at the time.

“But CBS is not pushing me. I’ll be in a comfortable office on the same floor — just around the corner from where I’ve holed up for the past 43 years — available, when asked, for whatever chore CBS News, ’60 Minutes,’ the ‘CBS Evening News,’ have in mind for me.”

“All of us at CBS News and particularly at ’60 Minutes’ owe so much to Mike,” said Jeff Fager, chairman of CBS News and executive producer of “60 Minutes.” “Without him and his iconic style, there probably wouldn’t be a ’60 Minutes.’ There simply hasn’t been another broadcast journalist with that much talent. It almost didn’t matter what stories he was covering, you just wanted to hear what he would ask next.

“Around CBS he was the same infectious, funny and ferocious person as he was on TV,” Fager said. “We loved him and we will miss him very much.”

“60 Minutes” will dedicate a special program to Wallace on April 15, CBS said.

Wallace “was as tough with everyone as he was with himself,” Bronstein said. He recalled seeing Wallace, then in his 80s, get “white-knuckled” in the tracking booth as he was putting his voice on a piece, growling, “Come on, Mike!” at himself.

“He was an inspiration,” Bronstein said. “I have to say I learned everything I know about journalism from him. I’m very thankful and appreciative to have known him, and known him well.”

Former first lady Nancy Reagan said, “My heart is broken today over the death of my dear friend Mike Wallace. My parents introduced me to Mike more than 75 years ago and we’ve been fast friends ever since. It’s hard to believe that he won’t be on television another Sunday night, or at the end of the telephone line to talk through the stories of the week.”

“Mike was an old school journalist and one of the most astute people I’ve ever met,” she said in a statement. “The news business will be a different place now, and our lives will be forever changed for having known him. My heart goes out to his family.”

Former CBS News anchor Dan Rather said, “Mike Wallace was from from the beginning and for many years the heart and soul of ’60 Minutes.’ In that role, he helped change American television news. Among the ways that this change was for the better: TV news became more investigative, more aggressive and relevant. Mike was sharp and quick of mind, a fierce competitor and a master interviewer.”

Myron Wallace was born on May 9, 1918, in Brookline, Massachusetts. His immigrant father ran a wholesale grocery business before becoming an insurance broker.

Wallace, who later traded Myron for the name Mike, liked sports and music. He reportedly fell in love with broadcast news at the campus radio station of the University of Michigan in Ann Arbor, where he studied broadcast news.

After graduating in 1939, Wallace launched his career at radio stations in Ann Arbor and Detroit, where he was as an announcer, and did talk and quiz shows, commercials and news readings.

The newsman was a communications officer in the U.S. Navy during World War II before landing a series of television jobs in Chicago, and trying his hand at acting. He and his then-wife, Buff, starred in the interview programs “Mike and Buff” and “All Around the Town.”

Wallace moved to New York and joined CBS in 1951. After leaving the network in 1955, he found success with the television series “Night Beat” and “The Mike Wallace Interview,” in which he challenged his guests with probing, confrontational questions. Wallace also narrated the documentary series “Biography.”

The 1962 death of Wallace’s son, Peter, in a hiking accident in Greece changed the course of his life, Wallace said. He decided to drop other projects and stick to news.

“He got the stoic Ayatollah Khomenei to smile during the Iranian hostage crisis in 1979 when he asked him what he thought about being called ‘a lunatic’ by Egyptian President Anwar Sadat,” CBS said. “The ayatollah answered by correctly predicting that Sadat would be assassinated.”

Carson, according to CBS, called Wallace “cruel” during an interview after Wallace asked, “It takes one to know one?” regarding Carson’s taking pity on an alcoholic newsmaker.

Fans of Barbra Streisand protested after the singer grew emotional in a 1991 interview when Wallace revealed that Streisand’s own mother had told him she was “too busy to get close to anyone.”

Sometimes Wallace himself became the story, CBS said. He was arrested in Chicago in 1968 on the floor of the Democratic Convention and also 36 years later, at the age of 86, after he had words with a New York City Taxi and Limousine Commission officer.

Wallace won his 21st Emmy for a 2006 interview with Iranian President Mahmoud Ahmadinejad, and in 2007, he got the first interview with euthanasia advocate Dr. Jack Kevorkian following Kevorkian’s release from prison.

In a 1998 interview with Kevorkian, “Wallace and ’60 Minutes’ took heat for broadcasting Kevorkian’s own tape showing him lethally injecting a man suffering from amyotrophic lateral sclerosis,” CBS said.

In 1995, Wallace’s interview with Jeffrey Wigand, a high-ranking tobacco executive turned whistle-blower, was held back “for fear of a multi-billion-dollar lawsuit that could have bankrupted CBS,” the network said. “The interview, in which Wigand revealed tobacco executives knew and covered up the fact that tobacco caused disease, was eventually broadcast on ’60 Minutes’ in February 1996. The incident became the subject of the film ‘The Insider.'”

Bronstein recalled that often, Wallace would come into an interview after only a discussion with producers and a briefing book put together for him.

“You’d be asking yourself, ‘How in the world is he going to pull this off?'” Bronstein said. But when he did, “You’d just be sitting there in awe.”

“Mike Wallace is a legend in the news business,” said CNN’s Anderson Cooper, a contributor to “60 Minutes.”

“Tough, hardworking, he’d go anywhere to get the story,” Cooper said. “If I could have half the career Mike Wallace had, I would consider myself a very lucky man.”

In 1997, Wallace — to the surprise of his audience — described in a documentary his paralyzing bouts of depression that began in the early 1980s. He revealed that he was taking medication. The news seemed to contradict his energetic and focused work ethic.

He also told CBS’ Morley Safer that he once attempted suicide with an overdose of sleeping pills, according to CBS News.

Wallace was honored with a slew of awards. In 1991, he was inducted into the Television Academy Hall of Fame. He also authored several books.

“Part of his rich legacy includes the Knight-Wallace Fellowship and Mike and Mary Wallace House at his alma mater, the University of Michigan,” CBS said. “Wallace’s donations support this in-residence study program begun in 1994 for professional journalists seeking to improve their knowledge in a desired field or issue.”