All aboard! Respect, remembrance mix with the macabre

(CNN) — Morgan Mullinix was laughed at when she’d tell friends where she was headed.

They thought she was crazy when she signed up for an eight-day Titanic cruise chartered to commemorate the 100th anniversary of the ship’s demise.

But for the 450 people aboard the Azamara Journey, this trip is a once-in-a-lifetime opportunity. They say it’s the closest thing they’ll ever have to experiencing what led to the fateful ship’s sinking on a cold April night in the North Atlantic.

As a reporter, I experienced some of this myself when I described my assignment.

“Tell the captain to watch out for icebergs,” people would say. “You’re tempting fate … make sure there’s enough lifeboats.”

And it is a little eerie when you think about it: People are dressing up in period costumes similar to what was worn on Titanic in 1912. Women in corsets, hair up in Gibson rolls, head to afternoon tea. Meals that were served at the last dinner onboard the ship are crossing 2012 diners’ lips. (I had a Halibut dish on Wednesday, inspired by Titanic’s menus, and it was quite tasty.)

Harp music fills the parlor, although there’s a regular nod to 1997. You’ll only hear “My Heart Will Go On,” the theme to James Cameron’s blockbuster “Titanic,” at most once per hour. (That’s the rule, says the woman behind the mammoth mahogany instrument).

It’s all part of a trip that will culminate in a moment of silence held directly above the wreckage at the exact date and time Titanic met its end.

The captain even told me that we are, in fact, heading into waters that could include some ice. It would be a rare occurrence, but he said no one knows for sure until we are almost to the exact spot of the wreckage.

All of this, though, is what makes this trip even better for Mullinix, who is a full-time cruise consultant, a career inspired in part by her fascination with Titanic. Her mission is to get a sense of what those passengers experienced — everything except the iceberg part — aboard the White Star Line’s RMS Titanic.

“I looked out last night at the water and I thought, ‘I can’t even imagine what that had to have felt like or be like.’ There was nothing you could do. Nothing.”

That vast darkness is where more than 1,500 lost their lives, mostly by freezing in 28-degree water. While she admits it is “a little macabre,” she wouldn’t mind seeing an iceberg — emphasis on “seeing.”

“To feel the coldness of the air, to look up and see the sky and know that’s what they looked at,” those are some of the reasons Mullinix signed up. 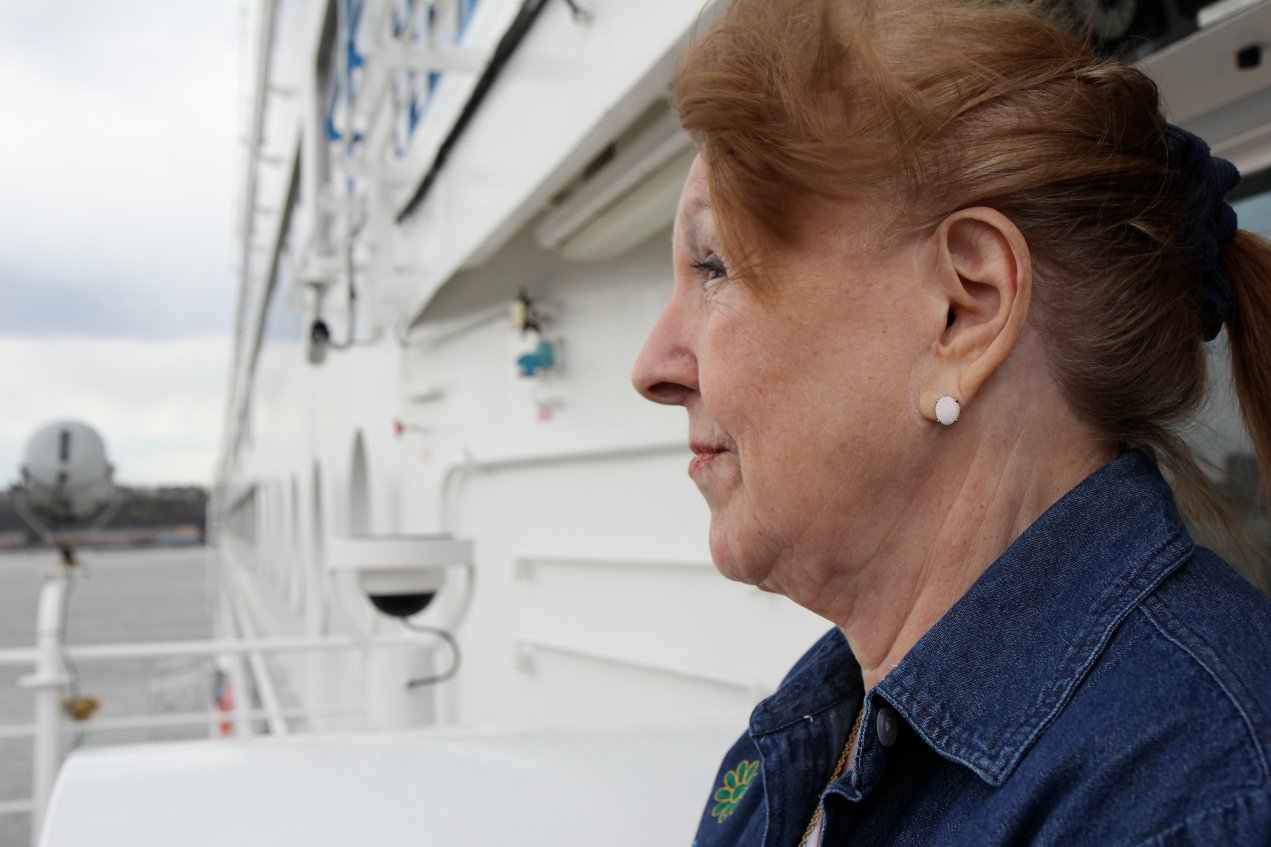 A tribute is scheduled to begin at 11:40 p.m. on April 14 — the time Titanic struck the iceberg. A wreath will be placed on the water two hours and 40 minutes later — just as the last of the ship slipped beneath the surface. The Azamara will meet up with the MS Balmoral at the sinking site for the memorial. That ship is carrying passengers retracing the maiden voyage of the Titanic from Southampton, England, on an expedition organized by the same travel outfit.

Mullinix doesn’t remember exactly how old she was, but she knows she was in “the single digits” when she became hooked on all things Titanic. It was the story of her great grandfather, as relayed by her father.

He was on the Carpathia, which answered the distress signals from the doomed ship, rescuing hundreds of passengers.

“He was there. He witnessed the survivors,” she said, explaining why she wants to be there, exactly one century later.

Passenger Sharon Willing said she would “go to the ends of the earth” to pay tribute to her great-grandfather, who died that night. He and his wife — Willing’s great-grandmother, who made it out on lifeboat four — were first class passengers aboard Titanic.

“Although I obviously didn’t know him, I have felt a mental and emotional closeness to him for a very long time,” Willing said the first day of the journey. “So, being here, going to the site, is for me like meeting him and being able to say goodbye.”

Willing says it’s hard for her to talk about her great-grandparents and not get choked up, particularly when she describes what she knows to be the circumstances that led to their parting ways.

“When they got the notice to go on up to the boat deck, they were laughing together and saying, you know, this is — isn’t this kind of silly,” Willing said.

“He put her in lifeboat four, told her that he’d be coming back, and he’d be there waiting for her. And when she got into the lifeboat and they pulled away, she heard this hissing sound, and she realized then that it was water going into the ship. And she looked for her husband, and she couldn’t find him. And his body was never found,” she said, and began to cry.

Those on board the Azamara Journey range from the 76-year-old Willing to 9-year-old Patrick Druckenmiller, who received this trip as a gift from his grandmother because he’s such a Titanic buff. As he walked the gangway to board the ship, Druckenmiller was dressed as Titanic Capt. E.J. Smith, in full uniform, complete with a white cotton beard.

Passengers chat about the merits of bringing artifacts from the wreck site to shore, or about why Robert Ballard, one of the men who discovered Titanic’s wreckage in 1985, made a bad choice when he didn’t bring anything up from the ship. Anywhere else, these topics might seem out of place — as would a discussion about how the constellations aren’t correct in the night sky as Rose clings to the piece of driftwood in the movie. Not here.

Thursday was ABBA night at the disco. Of course, I attended. The disco draws all kinds — from the middle-aged man in a kilt who came on the voyage to pay a bagpipe tribute at the cemetery in Halifax, Nova Scotia, where many victims are buried, to the 20-something singers and dancers who make up the cruise line’s usual year-round entertainment.

This is certainly not the crowd they’re used to. The Azamara Journey’s crew members declined requests for formal interviews, though some told me this is certainly a more “unique” crowd filled with “interesting” characters.

On the surface the trip is easy to poke fun at. But one thing is for sure — on the night of the 14th, no one will be dancing. Disco lights will go dark, the casino’s slot machines silent. No sweet sounds of the harp, no “My Heart Will Go On.” Only the rhythmic crashing of waves against the ship.

And sure, perhaps someone somewhere will be laughing at those onboard. But for Morgan Mullinix that won’t matter anymore.

“I love that I’m sitting here with you guys and you’re not laughing,” she said to a group of new friends as they talked Titanic. “We’re all understanding each other.”