From John Zarrella
(CNN) — The space shuttle Discovery landed at Dulles International Airport outside Washington on Tuesday after a series of nostalgic fly-bys on the back of a NASA Boeing 747, bringing whoops of pride and tears to the eyes of space fans and astronauts alike.

The 747’s flight crew popped a hatch atop the aircraft and waved an American flag as it taxied off the runway. 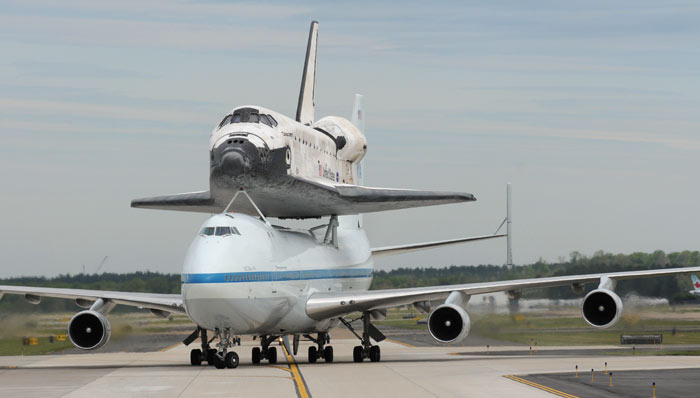 “Its gonna be sad because I won’t be able to see it anymore,” said 9-year-old Paul Broome, who watched the shuttle fly-by from the National Mall in Washington.

The flight — the last time Discovery would be aloft — took it from Florida’s Kennedy Space Center to the Washington area, where it will spend retirement as a museum piece at an annex to the Smithsonian National Air & Space Museum in Chantilly, Virginia, near Dulles.

The shuttle will be removed from the specially modified 747 and star as the guest of honor at a four-day celebration punctuated by a ceremony Thursday formally welcoming Discovery to the Smithsonian collection.

The space shuttle Enterprise, which has been on display at the museum since 1985, will be moved to the Intrepid Sea, Air & Space Museum in New York.

“It’s a very emotional experience, and I’m sorry this nation is out of the space exploration business for a while,” Discovery veteran astronaut Joseph Allen said.

As it left Florida at first light, the shuttle made a pass over launch pad 39A, the site of all the manned Apollo launches as well as the first 24 shuttle launches. The symbolic salute to the nation’s space program was followed by a flight down the beach and over the space center’s visitor complex before it headed north.

Some families camped in the space center parking lot for a couple of hours to view the shuttle as it flew by. Cheers erupted when it did.

Over Washington, the shuttle circled the National Mall three times, prompting repeated cheers from onlookers, before heading to Dulles.

Crowds also watched the shuttle fly past the Pentagon, where service members from privates to admirals and generals poured outside to watch.

People snapped pictures, while drivers on nearby roads slowed to watch the spectacle and honk their horns in salute.

Discovery is the oldest of the three remaining orbiters from a shuttle era that officially began April 12, 1981, with the launch of the shuttle Columbia.

Discovery — named after one of the ships used by British explorer James Cook when he traveled to Hawaii, Alaska and Canada in the 1770s — carried 252 people and the Hubble Space Telescope into orbit during its career.

It was also the first to return to space flight after the loss of the shuttles Challenger and Columbia.

Its last commander, Steve Lindsey, and five others who flew on mission 133 in February 2011 came out to say goodbye.

“Bittersweet is an overused word, but it is sad,” Lindsey said.

Onlookers shared that sentiment but said it would be worthwhile to have Discovery on display in Washington.

“It’s a wonderful, spiritual thing for the United States to have had something like this,” said Bob Schwartz. “It’s good to see it preserved here in the capital.”

With every step toward retirement, the shuttle fleet becomes more a part of history. In 30 years of flying, there were grand accomplishments and heart-wrenching tragedies. A space flying machine with wings, it was like nothing ever built.

But dwelling in that past would be a mistake, Lindsey said.

“We’ve got to move on; we’ve got to make sure that spaceflight doesn’t die in this nation,” he said. “We still have (the) space station going, but if we don’t get ourselves heavy lift, get going with exploration or part of what I’m working on — the commercial program — then we risk losing this as a nation, and I don’t want to do that.”

In some ways, the past is meeting the future. Just a few miles to the south at Cape Canaveral, Space X is in its final preparations to launch its Dragon spacecraft. It is a hugely crucial test scheduled for the end of April. Space X hopes to be the first commercial company to rendezvous and then berth with the International Space Station.

Next year, Space X plans to start ferrying cargo to the station and in four years, U.S. astronauts.

Alvin Drew, a mission specialist on Discovery, said these companies vying to pick up where the shuttle left off are taking a leap of faith.

“These guys who run the commercial companies will tell you with the money, they could have been there in 2015 if the money was there,” Drew said. “You tie yourself to government funding, you are making a tough deal, because there’s no guarantee the succeeding administrations or congresses are going to continue your funding.”

Commercial companies say their new vehicles will be many times safer than the shuttles. It has to be that way now, Drew said.

“We had bigger budgets and a bigger tolerance for failure and loss of life back in the ’60s and early ’70s than we have in this particular generation,” Drew said. “So the shuttle was built for that generation of explorers, and I’m not sure it fit well in our current society or current culture. The risks you would take for the shuttle, I think, are higher than most people are willing to accept in 2012.”

The other two surviving shuttles are also destined for display.

The shuttle Endeavour will head to the California Science Center in Los Angeles by the end of the year. Atlantis will take up permanent residence at the Kennedy Space Center Visitor Complex, a final exclamation point to the end of an era of space exploration.