Celebrity reaction to the death of Dick Clark 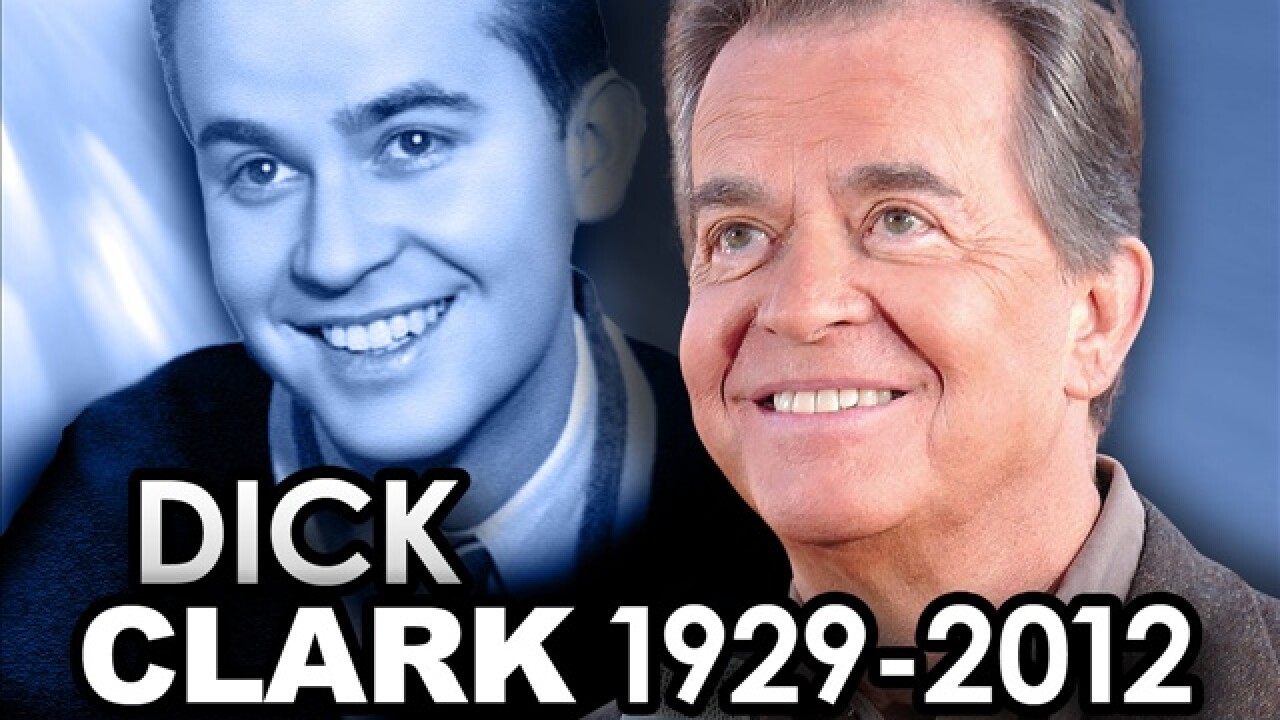 (CNN) — A roundup of reactions to the death of television producer and longtime “American Bandstand” host Dick Clark, who died Wednesday:

“If someone cannot fill your shoes, you are a legend. And Dick Clark was a legend.”
— Donny Osmond, to CNN’s “Piers Morgan Tonight”

“Dick Clark, with all the fame and money, wasn’t a limousine guy.”
— Larry King

“He was one of the top people that you wanted to get your music to. And you knew that if he put you on his show, you were a success. And, yes, he produced a lot of things, but he produced it because he loved it.”
— Gloria Estefan

“What he did for music was just beyond explanation. If it was not for Dick Clark, I don’t think Motown would have been the company it was. … He did everything with class, style and integrity.”
— Berry Gordon, Motown founder, to CNN’s “AC360”

“If you didn’t go on ‘American Bandstand,’ you hadn’t made it yet.”
— Aretha Franklin, to CNN

“You are never really prepared for this day. … He just seemed to have had some of the fountain of youth in him. There’s a great word that is synonymous with Dick, and that’s ‘loyal.’ Loyalty is a lost art today, and it applies so much to Dick.”
— Jean Kasem, wife of longtime “American Top 40” host Casey Kasem and family friend

“Anything Dick Clark touched, it turned to success. He knows what he is doing and he knows how to do it.”
— Little Richard, to CNN

“I think only God is responsible for making more stars than Dick Clark. I really do. I think he really was the manufacturer of the music business as we know it today. He was the Pied Piper, he was the guy who created careers, (but) he was also a mentor and cared about you as a person.”
— Tony Orlando

“This is a sad day. He was a dear friend, supporting me and my music for all of my years in the business. A great businessman and a true gentleman. An inspiration. My heart is so heavy now.”
— Barry Manilow

“I was very sad to here this news. We all felt Dick was always this handsome teenager, as we all got older, Dick remained a teenager. I will always appreciate what he did for me and for popular music. He presented Motown and The Supremes on tour with the Caravan of Stars and on ‘American Bandstand’ where I got my start. Dick Clark was a pioneer, he was a music star maker, he was a legend and was my friend. He said that ‘music is the soundtrack of your life.’ Since I was 16, he was always a part of mine.”
— Diana Ross

“With ‘American Bandstand,’ he introduced decades’ worth of viewers to the music of our times. He reshaped the television landscape forever as a creative and innovative producer. And, of course, for 40 years, we welcomed him into our homes to ring in the New Year. But more important than his groundbreaking achievements was the way he made us feel — as young and vibrant and optimistic as he was.”
— President Barack Obama

“Clark was a trendsetter who helped guide our tastes in music, dance and fashion for more than three decades.”
— Terry Stewart, president of the Rock and Roll Hall of Fame

“He was smart, charming, funny and always a true gentleman. I learned a great deal from him, and I’ll always be indebted to him for his faith and support of me.”
— Radio and television host Ryan Seacrest, who took over Clark’s New Year’s Eve program on ABC

“Not 2 many people actually deserve the term ‘legend,’ Dick Clark embodied it & never lost his humility or humanity. We will miss him! Our sincerest condolences to Dick Clark’s wife, Kari, his family & all who loved & admired him which includes the whole Estefan clan!”
— Singer Gloria Estefan, on her website

“You’ll continue to be an inspiration to us all Dick Clark. Thanks for the amazing rockin years you were with us. You’ll truly be missed.”
— The Jonas Brothers, via Twitter

“I loved Dick Clark. He was so instrumental in my career as well as all the other Motown acts and so many others in the recording business. Goodbye, my friend, rest in peace.”
— Smokey Robinson

“Times Square is considered the crossroads of the world in no small part because Dick Clark’s New Year’s Eve celebrations there were beamed across the globe. I remember one New Year’s Eve, he and I stood in Times Square marveling about how much the area — and the city — had improved over the years. But Dick Clark never had to change — he was a great entertainer who stood the test of time.”
— New York Mayor Michael Bloomberg

“He was a wonderful guy to work for, and he was a great pioneer. He gave you everything you needed to be the best for his television show.”
— Verdine White, Earth, Wind and Fire bassist

“This guy was the best. He helped me from the very bottom of my career all through the ’80s and the ’90s, and he’s going to be missed a lot.”
— Singer Freddy Cannon, who appeared on “American Bandstand” 110 times