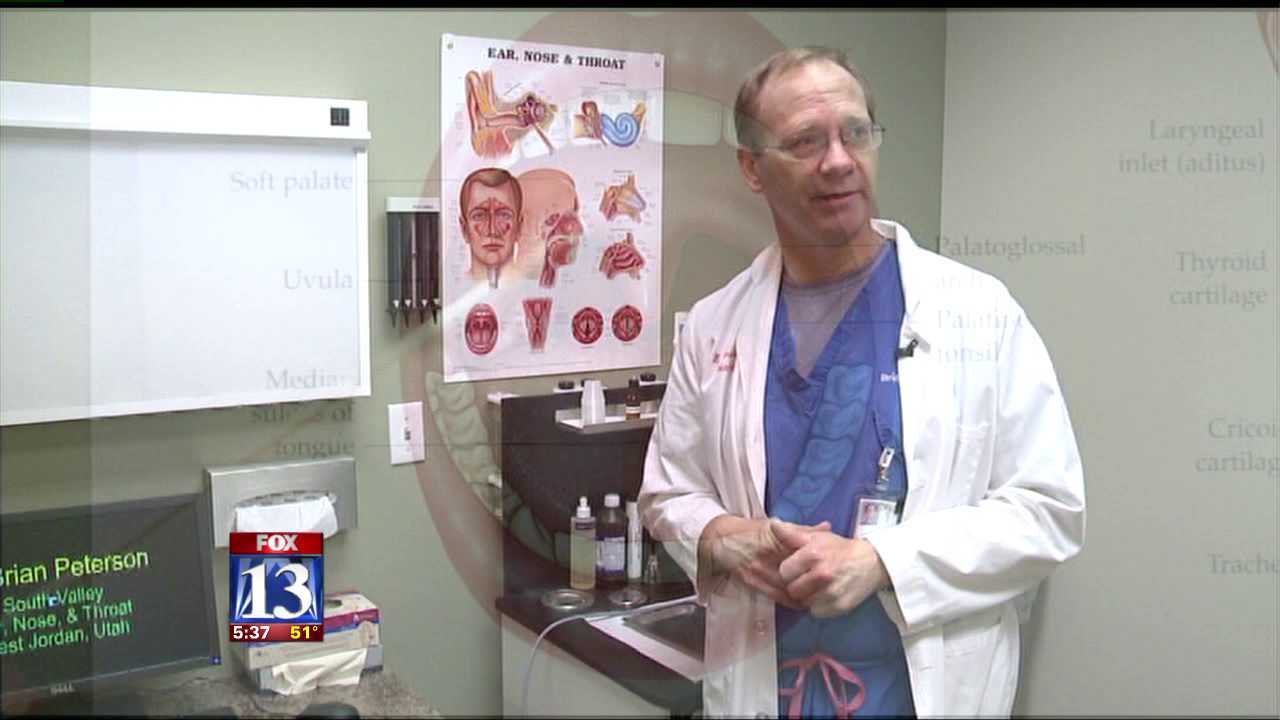 WEST JORDAN -- A procedure first developed by medics in the military is now helping one local doctor stop people from snoring.

Before Sharon Taufer's husband received the new treatment, she says the snoring made it impossible to sleep next to him. But after a simple medical procedure, she says she can finally sleep in the same bed as her husband after the snoring stopped.

“I really can't hear out of my left ear well. It was loud enough that even when If I slept on my good ear, I could still hear it very well. I mean it was that loud,” said Taufer.

Dr. Brian Peterson says there is a soft area in the palate that vibrates and causes snoring. To stop snoring, doctors make a quick injection of about half a teaspoon of solution in the back of the snorer's palate to deaden the skin.

“Over a period of four to six weeks (the injection) causes damage to the tissue and eventually stiffening and hardening of the palate so it doesn't vibrate so  much,” said Peterson.

Peterson says the procedure, known as snoreplasty, takes less than five minutes, but the injection does create a canker sore that can be painful for up to two weeks.

Taufer's husband said for the first week or two, the dead skin dies and falls off.

As an ear, nose and throat doctor, Peterson looked into this procedure after a patient he treated started hearing better. But after being able to hear better, she started to be bothered by her husband’s snoring at night.

“I said, ‘What's the problem with him?’ She says, 'He snores and I can't sleep on my good ear anymore,’” said Peterson. “So I said, 'I have a choice, I can either take the hearing bone out of your ear so you can sleep on your good ear and not hear him snore, or we can fix your husband's snoring.'”

He did the same thing to improve Taufer’s marriage.

“It does mean we can sleep in the same bed now. He doesn't have to go out and sleep on the couch,” says Taufer.

The procedure can be done for $400 and they are doing it out at South Valley Ear, Nose and Throat.

More information can be found online at www.SouthValleyENT.com or by calling 801-566-8304.