SOUTH SALT LAKE -- A "neighborhood" of sorts inside a storage yard here was shut down by police and the Salt Lake Valley Health Department.

"If you looked in the unit, all you'd see is a board going straight down," said Christie Andrews. "All you'd think is this was the end of the unit."

But behind the boards, Andrews said, was a loft that had been built.

"You'd go up a little hidey hole where there was a fridge, and a TV, and blankets and carpet," she said.

There was insulation and conduit wire had been taken from the light switch to power a heater and air conditioning, she said. On a wall, there was an "escape hatch" that led to a storage unit next door -- where another man lived.

In the neighboring unit, a man had drawn on the walls to pass the time. His unit was nowhere near as elaborate.

Storage yard managers said they had their suspicions that people had been living here, but did not know until they discovered a baby inside one of the units. South Salt Lake police were called out with the Salt Lake Valley Health Department to evict them.

It is illegal to live in storage units or sheds. South Salt Lake police said they treated it as a trespassing case, and the four men and one woman found to be living there ultimately left voluntarily.

The health department said it has received an increasing number of complaints about people living in them. Investigators told FOX 13 they believe it is related to the downturn in the economy.

While people may view it as a cheap way to live, the health department said it is potentially deadly.

"There's a fire issue because people put propane heaters in there, you can start fires in there with scrap wood," said Kerry Cramer with the Salt Lake Valley Health Department. "People try to stay warm. we also require them to have basic sanitation facilities. toilets, running water." 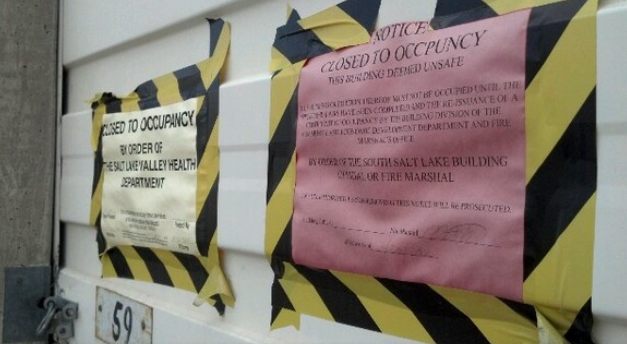