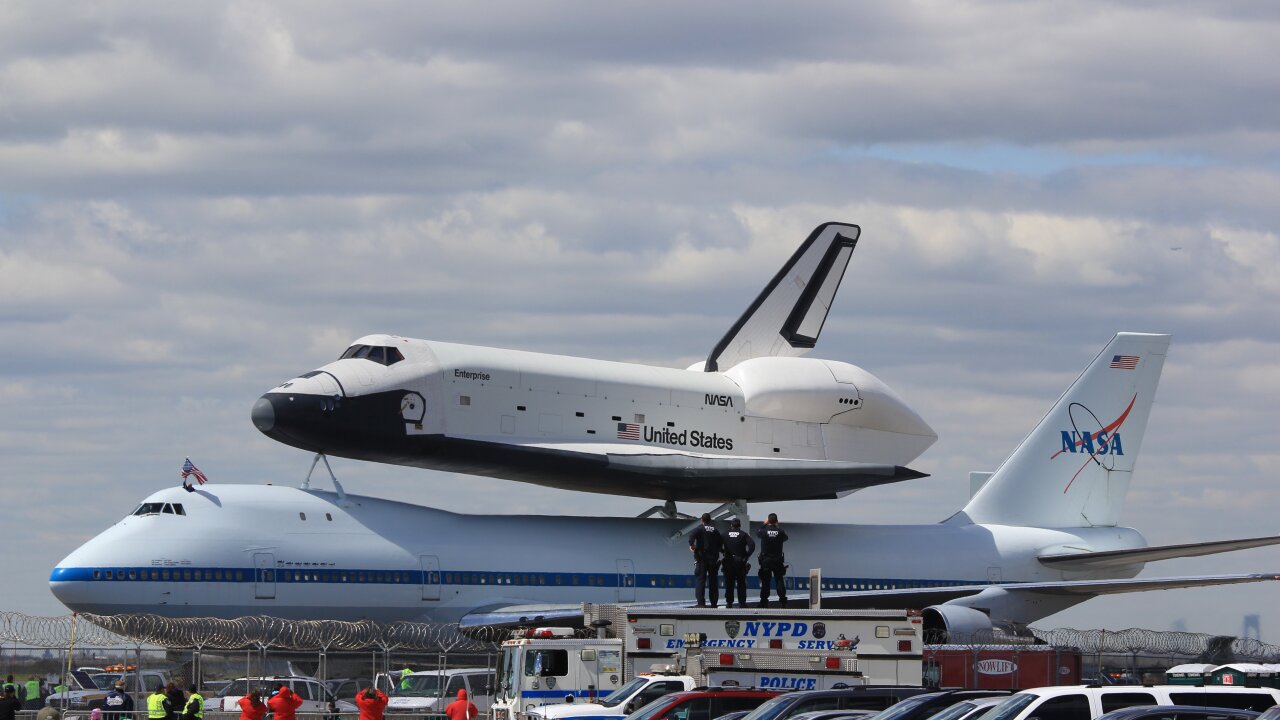 Shuttle Enterprise mated to 747 Boeing lands at JFK Airport in New York on April 27, 2012. The Enterprise flew past the Statue of Liberty and other landmarks on its way home to the Intrepid Sea, Air and Space Museum in New York City. The shuttle, which has been on display at a Smithsonian Institute museum near Washington, is the latest to shift locations as NASA sends its fleet into retirement. Discovery — the most traveled of the shuttles — […]

NEW YORK (CNN) — The space shuttle Enterprise, mounted atop a 747 jumbo jet, swooped across the New York City skyline on Friday before touching down at the city’s John F. Kennedy International Airport, bringing an end to its final flight.

It took off from Virginia’s Dulles International Airport with a flight plan that included fly-bys of the Statue of Liberty and other Gotham landmarks. It is ultimately bound for its new home at the city’s Intrepid Sea, Air and Space Museum.

“This is going to be the largest NASA artifact north of Baltimore in the entire Northeast region,” said Susan Marenoff-Zausner, the Intrepid’s president. “For kids to be able to come and see this when they’d have to travel miles and miles to go somewhere else, it’s right in their back yard.”

The space agency said it will put the shuttle on a barge in a few weeks and float it up the Hudson River to its final home.

“It’s the end of one era, but I think it’s the beginning of another era,” said space historian Andrew Chaikin. “The shuttle was amazing but it’s not sustainable. And above all, we need a space program that can do great things in a sustainable way.”

The shuttle, which has been on display at a Smithsonian Institute museum near Washington, is the latest to shift locations as NASA sends its fleet into retirement.

Discovery — the most traveled of the shuttles — is replacing Enterprise in the Smithsonian facility.

Completed in 1976, Enterprise was designed as a prototype test vehicle. Test pilots demonstrated that it could fly and land in the atmosphere like airplanes, but the Enterprise never flew in space.

“It’s a very gratifying feeling for someone who’s devoted their career to test flying like myself and all the other astronauts,” said former Air Force Maj. Gen. Joe Engle, who commanded one of two flight crews that manned the Enterprise during test flights in 1977. “To get a flight in a space shuttle is just the culmination of your entire professional career.”

The shuttle was originally to be named the Constitution, but a write-in campaign by fans of the television series “Star Trek” persuaded officials to rename it in honor of the show’s main starship.

NASA sent the shuttle on a tour of Europe and Canada in 1983, and it also appeared in the 1984 World’s Fair in New Orleans. The craft made a brief return to service as a ground test vehicle in 1984 before retiring to the Smithsonian’s collection in 1985.

NASA is preparing to fly space shuttle Endeavour to Los Angeles sometime in the second half of the year. Atlantis is being readied for display at the Kennedy Space Center Visitor Complex in Florida.

The other two shuttles in the NASA program, Challenger and Columbia, were destroyed in flight.