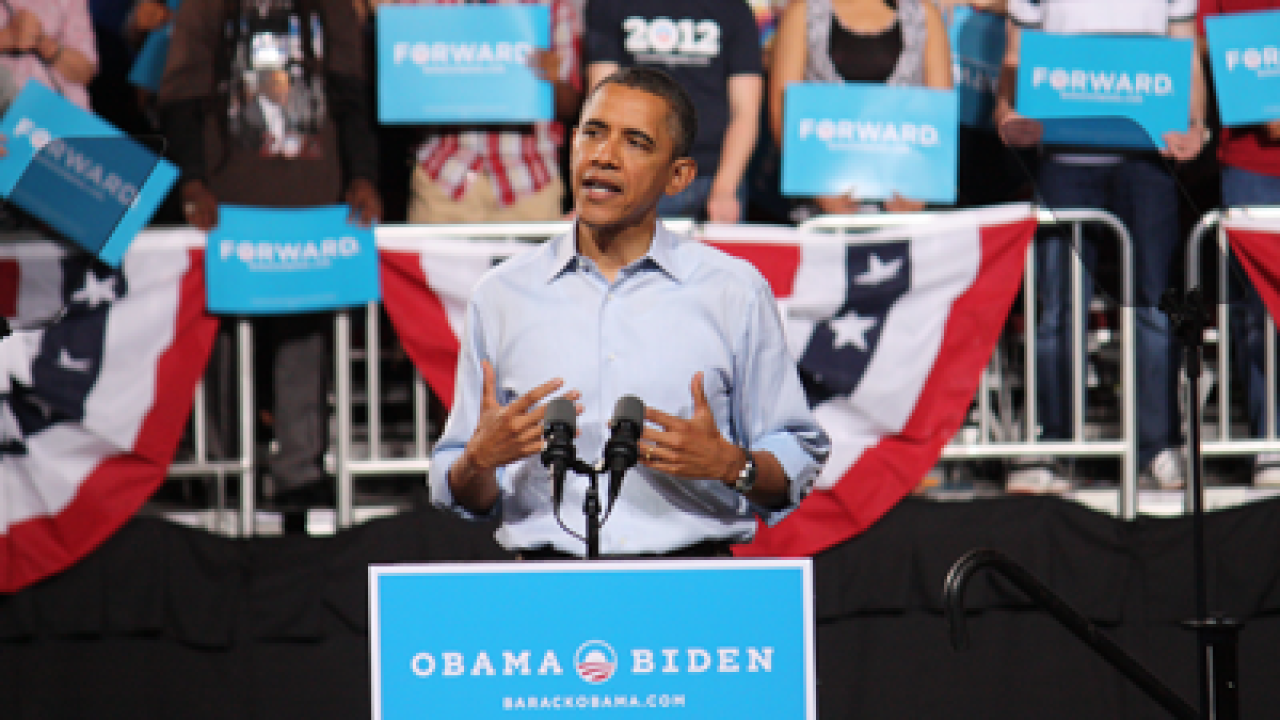 COLUMBUS, Ohio (CNN) — President Barack Obama formally opened his re-election bid Saturday with two rallies in which he highlighted accomplishments over his three and a half years in the White House and argued that America can’t afford to adopt Republicans’ “bad ideas.”

“We are making progress and now we face a choice,” said the president, at his first rally at the Schottenstein Center on the campus of The Ohio State University in Columbus. “This is a make or break moment for the middle class, and we can’t turn back now.”

In this 36-minute-long address, Obama said presumptive Republican presidential nominee Mitt Romney would “rubber stamp” the congressional GOP agenda, telling the crowd that “we cannot give him that chance.”

“That’s the choice in this election, and that’s why I’m running for a second term as president of the United States,” added Obama.

The speech highlighted the narrative that the Obama campaign hopes to push this year: reminding voters how many millions of jobs were lost before the president took office.

The president said that in the final six months of 2008, “nearly three million of our neighbors lost their jobs.” But he said when he took office, “We didn’t quit. We don’t quit. Together we are fighting our way back.”

Obama touted the federal government’s rescue of the big auto companies, and he criticized his challenger, saying “when some wanted to let Detroit go bankrupt, we didn’t turn our backs.”

“Today, America’s auto industry is on top of the world,” he said.

The Michigan-born Romney, whose father was a former auto executive and governor of that state, opposed the bailout, saying a structured bankruptcy could have achieved the same result without the massive cost to the U.S. government. Moreover, the former Massachusetts governor has argued the Obama administration made too many concessions to auto unions as part of that bailout.

The president also touted his foreign policy achievements, saying that “for the first time in nine years, there are no Americans fighting in Iraq.” He said that “Osama bin Laden is no longer a threat to this country,” and “al Qaeda is on the path to defeat.”

He then pledged that “by 2014, the war in Afghanistan will be over,” and pointed out that Romney had opposed setting a troop withdrawal deadline in that conflict.

Romney took a hard stance against illegal immigration during the Republican primaries, opposing the president’s push for a limited pathway to citizenship for some illegal immigrants. The issue is of importance to the growing Latino electorate in the United States.

The Ohio arena, which holds around 20,000 people, appeared to be around two-thirds to three-quarters full, with around half of the seating in the upper deck empty. The Columbus fire department estimated the crowd size at 14,000. While smaller in size than many Obama rallies during the 2008 campaign, the crowd dwarfed the size of any rally held this cycle by Romney.

“The fact remains that American families are struggling on his watch: to pay their bills, find a job and keep their homes. While President Obama all but ignored his record over three and a half years in office, the American people won’t. This November, they will hold him accountable for his broken promises and ineffective leadership,” Romney campaign press secretary Andrea Saul said in a statement.

Prior to Saturday’s rally, the president had made 20 trips to Ohio since taking office. Romney returns to Ohio on Monday, his third trip to the Buckeye State in three weeks.

Ohio’s unemployment level stands at 7.5%, slightly lower than the national average of 8.1%. Ohio has become a crucial battleground state in recent presidential elections. The Buckeye State put President George W. Bush over the top in his 2004 re-election. Four years ago, Obama won Ohio by five percentage points over Sen. John McCain of Arizona.

The most recent public opinion poll in Ohio, released earlier this week by Quinnipiac University, indicated a tie between Obama and Romney. According to the survey, 44% of registered voters supported Obama, with 42% backing Romney. The president’s two-point margin was well with in the poll’s sampling error.

Acknowledging that his re-election bid faces hurdles, the president told those in the audience that “Ohio, this election will be closer than the last.”

And while he continuously talked about moving “forward” — his 2012 campaign slogan — in his speech, he did hark back to his 2008 slogan. “If people ask what this campaign is about, you tell them it’s still about hope, it’s still about change,” said Obama.

After the Ohio speech, the president went to Virginia, another crucial battleground state, and held a rally on the Richmond campus of Virginia Commonwealth University.

The Rams successful men’s basketball coach Shaka Smart hosted the event at the school’s Stuart C. Siegel Center. A fire marshal said that about 8,000 people were in attendance, filling the arena to capacity according to the Obama campaign.

First lady Michele Obama introduced her husband, telling the crowd, “We’ve come so far. We’ve got so much more to do.”

The president then took the stage, offering a speech much like the one he’d made hours earlier in Ohio.

He pointed to the “progress” made during his first term, and suggested Romney and “his friends” were delusional if they “think that the same bad ideas will lead to a different result.” Obama ended his speech trying to fire up his supporters to “stick with me, fight with me, and press on with me.”

“If you’re willing to work even harder in this election than in the last election, I guarantee you we will move this country forward,” he told the Richmond crowd. “We will finish what we started.”