UPDATE 4:09 p.m. PST: The judge will rule tomorrow on whether to allow Steven Powell's journal entries to be admitted at trial.

Prosecutors said they intend on calling witnesses beginning Wednesday, including a Pierce Co. Sheriff's investigator and the mother of the alleged victims. The witnesses from Utah (the West Valley City Police Department and Steven Powell's daughter, Jennifer Graves) will testify on Monday.

There will be no court on Thursday or Friday.

UPDATE 4:04 p.m. PST: The judge said he is not likely to rule on whether or not to exclude discussion of Susan Cox Powell and other evidence from trial until the morning.

Prosecutors, discussing the images they would like to introduce in court, read off a list of graphic names of computer files and subfolders. The judge noted that the names of some of the files were likely to offend jurors.

"They selected the worst photos they could pick as far as prejudicial value," defense attorney Travis Currie said, pointing out that many are not inflammatory.

The judge said he would hear arguments on the admissibility of the images as the trial goes along. 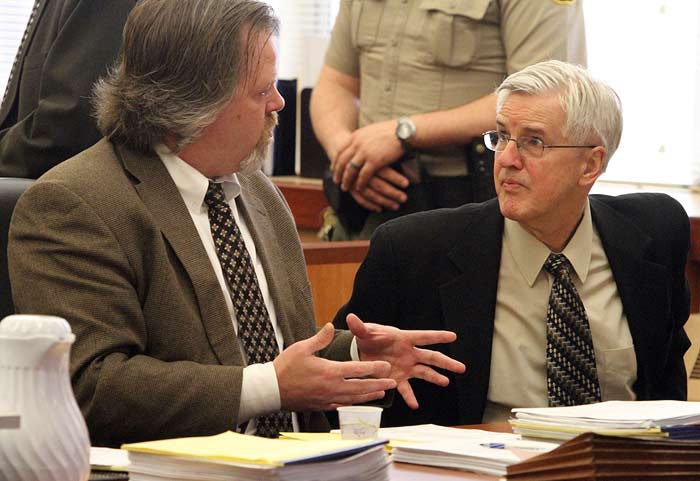 Explaining the ruling, the judge said Powell did not direct the girls to pose or act explicitly, so it did not meet the definition of the law he was charged with.

UPDATE 3:21 p.m. PST: Steven Powell was brought back into court ahead of his lawyers. He smiled briefly at reporters sitting on the front row as his handcuffs were removed.

UPDATE 2:58 p.m. PST: In new filings made public, defense attorneys detail their request to have the child pornography charge dismissed against Steven Powell.

Prosecutors filed a lengthy memorandum, addressing the issue of bringing up Susan Cox Powell at trial. The graphic, 21 page filing also details the computer file names of some of the women Steven Powell is accused of surreptuously photographing. There is a lengthy list of those for "SMP," which is "Susan Marie Powell."

The filings have been posted at the bottom of this page.

UPDATE 11:15 a.m. PST: Defense attorneys asked the judge to keep references to Josh Powell, the murder-suicide involving his children and the disappearance of Susan Cox Powell kept to a minimum.

Defense attorneys argued it was not relevant to Steven Powell's case. Prosecutors said the only reference would be when police explain why they searched his home.

The judge granted the request.

Court will reconvene this afternoon.

UPDATE 10:59 a.m. PST: Defense attorneys asked the judge to keep journal entries written by Steven Powell in 2003, 2004 and 2010 out of trial. They apparently talk about Susan Cox Powell (and his infatuation with her). Defense attorney Travis Currie argues relevance.

"The very fact that they are about Susan Powell ... makes them far more prejudicial," Currie told the judge.

The prosecution asked the judge to admit a disc that they claim contained all of Steven Powell's journal entries, to show that what they plan to introduce is very limited.

"I think she knew after that that I was a voyeur," the prosecutor said, reading from it.

"The vast majority of the writing is sexually graphic, obsessing over Susan Powell," the prosecutor said.

The judge agrees to review the journal entries to decide what gets intro trial.

UPDATE 10:44 a.m. PST: As attorneys argue over what images the jury should see, Steven Powell is sitting at the table with his hands clasped. He's shaking slightly.

Prosecutors want to have a detective describe all the images in order to show that it belonged to Steven Powell.

Judge Culpepper agrees that some images are relevant, but he will not give the state "a blank check." He sets limits on what the jury will see.

UPDATE 10:16 a.m. PST: The judge is taking the defense's request to dismiss the child pornography charge under advisement.

Now, defense attorneys are seeking to keep some of the thousands of images out of the trial. They say it includes legal pornography, as well as wedding pictures, images of family functions and pictures of Susan Cox Powell.

Some of the images are of Steven Powell doing things in "a sexual nature." Defense attorneys are arguing that prosecutors wish to introduce these to make him look bad for doing something that is legal.

UPDATE 10:08 a.m. PST: The potential jurors have been dismissed to fill out the written questionnaire. Now the defense has motions to be argued. They're arguing to dismiss count 15, the child pornography charge.

"There are no allegations that Mr. Powell influenced, in any way, the actions of these two minor victims," defense attorney Mark Quigley told the judge.

Prosecutors conceded that the girls were engaged in normal activity (not pornographic), but the images focused on the alleged victims' genitals.

UPDATE 9:50 a.m. PST: The judge is questioning the jury about potential conflicts.

"This particular case has had some publicity," Judge Culpepper said to the room. He asked how many people had heard about the case. Nearly all of the hands in the room went up.

About 13 people claim to have a preconceived opinion which would prohibit them from being on the jury. The judge is admonishing the jury to not do research on the case, nor pay attention to news coverage of the trial. He cautioned them to not post on Facebook, "I'm on the Powell jury."

Several jurors were released after insisting they could not be unbiased. Several said they knew of people who were close to Susan Cox Powell or her family.

In all, 5 jurors were released in this round. The remainder will fill out written questionnaires and be called back tomorrow.

UPDATE 9:25 a.m. PST: The judge began by announcing he expected the trial to move quickly. The prosecution said it expected to make opening statements by Wednesday. There will be no court on Thursday, Judge Ronald Culpepper told the room.

Steven Powell's other daughter, Alina, is sitting alone in the back of the courtroom.

Prospective jurors have been brought in, carrying numbers. Judge Culpepper welcomes them. As he introduced them, Steven Powell and his attorneys stood to face the jury. Judge Culpepper reminded the jury of the presumption of innocence and then explained the charges against Powell.

UPDATE 9:15 a.m. PST: Steven Powell was brought into the courtroom, handcuffed but wearing a suit. The bailiffs removed his handcuffs. He is sitting at the defense table, reading papers and chatting with his attorneys.

UPDATE 9:10 a.m. PST: The prosecution and defense have arrived in the courtroom. Jury questionnaires will be finalized. I'll post a copy as soon as I get it.

UPDATE 8:43 a.m. Pre-trial motions are expected to be heard before the jury is brought in. Susan Cox Powell's family has arrived in the courtroom.

The judge has been chatting with reporters, prior to the hearing. Cameras are allowed in the courtroom, and the media has been set up in a side room to record the feeds.

Powell, 62, is charged with taking inappropriate pictures of two neighbor girls. Police said that after they searched Steven Powell's Puyallup, Wash., home last year, they found thousands of images of children and women taken without their knowledge. One of the victims was Susan Cox Powell.

Police served the search warrant for Steven Powell's home, searching for Susan's diaries and clues to her 2009 disappearance. The arrest of Steven Powell led to his Susan's husband, Josh Powell, losing custody of his children.

Josh Powell killed himself and the couple's children, Charlie and Braden, in an explosion and fire at a Graham, Wash., home in February.

Steven Powell's trial could last up to two weeks. Jury selection is expected to take one or two days. About 70 people will be brought in to fill out questionnaires. Opening statements could be Wednesday. Powell faces up to 75 years in prison, if convicted.