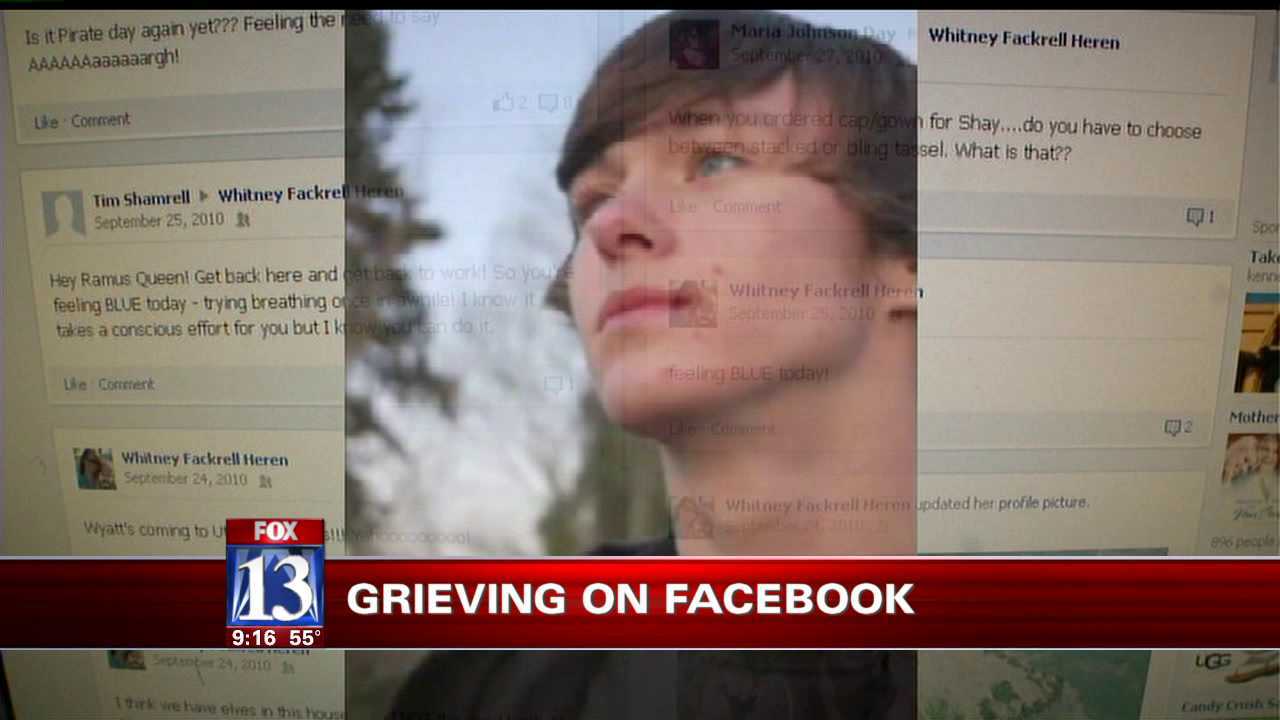 Facebook is one of the most visited websites online. And with millions of people communicating through the social network site daily, it is no wonder family and friends grieve there during times of death.

A Utah mother recently sat down with FOX 13 to share her story about how Facebook helped her through the grief process after her son died.

When it happened, it was a bit of a surprise for Whitney Heren. She says she never intended to have the news of the death on Facebook, but the decision was made for her.

"Within probably a half of hour of hearing, my nieces in Oregon had posted it on Facebook that Keanan had died. Then comments started flowing and I had people from Oregon, texting on my phone, asking what happened. I mean it was really fast," says Heren.

One after the other, text messages, phone calls and Facebook responses poured in and prompted her to reach out. She responded on Facebook saying the encouragement from friends gave her a voice to explain the shock and overwhelming sadness.

Kathy Supiano, the director of Caring Connections, a grief care program at the University of Utah, says everyone grieves differently. The purpose of grieving is to remember the past and find a way to go forward without the loved one who died. Supiano says it has always been better as a shared experience.

"The deepest fear all parents have, who are bereaved in the loss of a child, is that their child will be forgotten," says Supiano. "So when we see like with Facebook, when a young adult dies or a teenager dies, and all the friends start posting and remembering, most parents feel gratified."

For Heren, the grief persisted with her a year after her son died.

Her son Keenan, shortly before his 20th birthday, died in an accident that took place in the home. And what would have been a birthday turned out to be a tribute to his life.

Heren's grief compounded soon after, when she learned her mother had died just six days after the tribute party held for Keenan.

Word of the tragedies spread through Facebook. Any hesitation to include social media in the grieving process was quickly erased by kind words and comforting stories about her son.

Heren says at the time she did not have the energy to see people face-to-face, or say the words out loud.

"Anytime that sorrow is given a voice it's almost always an important element to healing," says Supiano and follows with a comment for those who seek that on Facebook. "If this is one of the ways it helps people and people are able to do it courteously with a sensitive heart, then I say they should."

The grief counselor says the downside to grieving on a platform like Facebook, is that it is stored online.

"Once it's out there electronically, it's out there, even when pages are taken down and things like that, they never really go away," said Supiano.

Facebook has helped create a virtual memorial for Keenan-- a place for love and support and a place Heren can go to remember her son.

"He was the chubbiest little baby, huge cheeks, rolls, he had this unruly hair that just stood up," says Heren. "Keenan ... such a sweet boy."

More about handing grief in the event of losing a love one can be found at the Caring Connections site HERE.