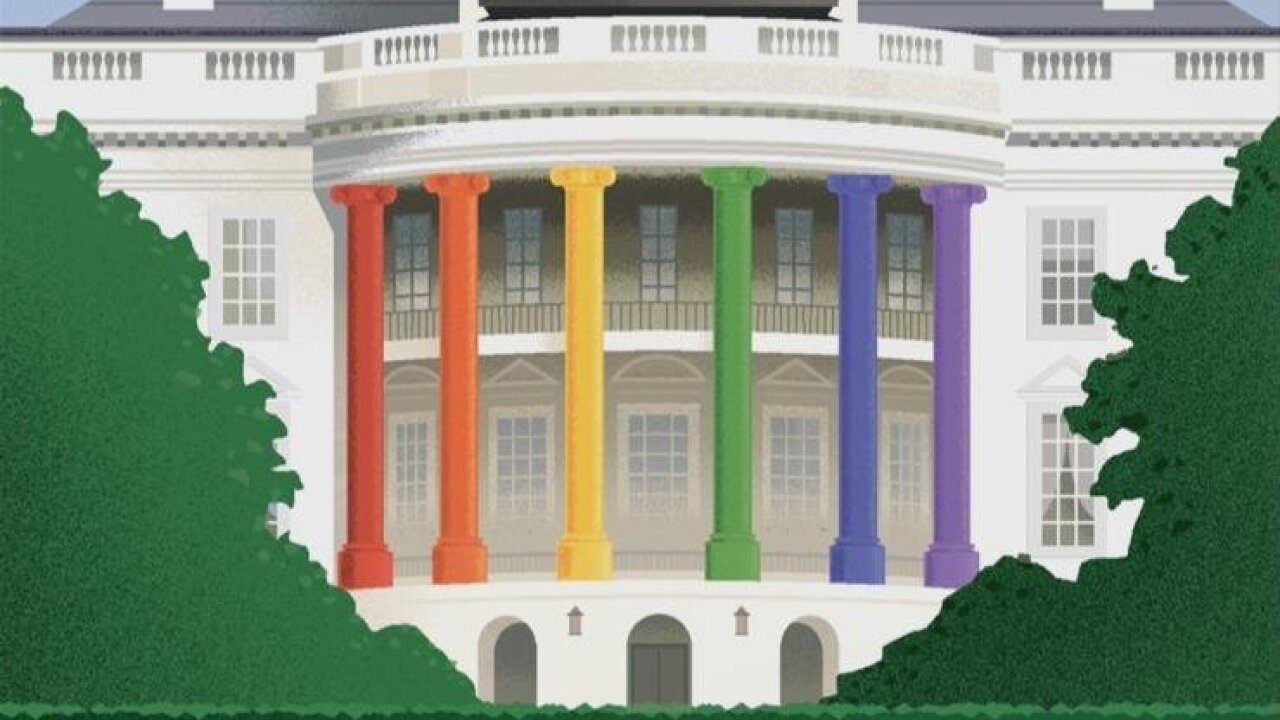 A Newsweek magazine cover bestowed that distinction on Obama this week with a picture of the president and a rainbow halo. If you view that as a naked attempt to grab your attention, capitalize on the moment and have you pick up a newsmagazine, you might be right.

But that illustration — along with a New Yorker cover showing the columns of the White House lit up in rainbow colors — certainly shows how the president’s public support of same-sex marriage has pushed the issue back into the spotlight.

The magazines’ choices also speak to the broad cultural impact of Obama’s announcement and pose questions about whether this moment may become a lasting part of his legacy.

That’s not to say the president’s announcement is necessarily a watershed moment. It earned him kudos and criticism despite the fact that he left the legal standing of same-sex marriage in the hands of the states and made no policy changes.

The issue also is far from resolved in the African-American community, and some conservatives say Obama’s announcement comes at a political cost.

CNN.com’s John Blake writes that some suggest the black church may punish Obama for announcing his support for same-sex marriage.

As millions went to church this weekend after the president’s announcement, clergy across the country offered their opinions, with the words of black pastors — a key base of support for Obama in 2008 — carrying special weight in a presidential election year. But black pastors were hardly monolithic in addressing Obama’s remarks.

Blake points out that a backlash by some African-American pastors, a campaign worry following the announcement, can be seen as historical irony. Black church leaders arguing against same-sex marriage are making some of the same arguments that supporters of slavery made in the 18th and 19th centuries, some historians say. Both groups adopted a literal reading of the Bible to justify withholding basic rights from a particular group.

Patrick R. Tull, a Lumberton, New Jersey, iReporter and Obama supporter, said that he believes marriage is between a man and a woman and that the president has alienated a big section of his supporters in the black community who have not “evolved” as the president has.

“The fact is many Americans, which includes Democrats, have not ‘evolved’ on the issue of same-sex marriage,” Tull said. “Mr. President, you should have stood your ground and said, that you believe marriage is between a man and a woman, but you are against discrimination of any kind. Individual states should decide what’s best for their state. It is a free country and people are free to love whomever they want and that’s OK with me, but I believe that marriage is between one man and one woman.”

Vera Richardson, also an Obama supporter, said the president’s stance on same-sex marriage will be his undoing for re-election.

“I am confused, I cannot vote for (Mitt) Romney, and I know Obama needs our vote, but he has caused anxiety in the black community,” she said in an iReport.

But for Andrew Sullivan, the writer of the Newsweek article and also a gay man, Obama’s announcement meant everything for the lesbian, gay, bisexual and transgender community.

“For gay Americans and their families, the emotional darkness of Tuesday night became a canvas on which Obama could paint a widening dawn,” Sullivan writes. “But I didn’t expect it. Like many others, I braced myself for disappointment. And yet when I watched the interview, the tears came flooding down. …

“I was utterly unprepared for how psychologically transformative the moment would be. To have the president of the United States affirm my humanity — and the humanity of all gay Americans — was, unexpectedly, a watershed. He shifted the mainstream in one interview. And last week, a range of Democratic leaders — from Harry Reid to Steny Hoyer — backed the president, who moved an entire party behind a position that only a few years ago was regarded as simply preposterous.”

And for one Republican, the announcement swayed him toward supporting Obama.

“I’m very happy with Obama’s decision because at the end of the business day I can see my partner and feel hopeful,” said iReporter David A. Seaman of Lansford, Pennsylvania. “I never would have thought he would do something like this. Just this decision alone made me swing way left to vote.”

While that analysis may be true for some, others wondered if the Newsweek cover went too far in enshrining the moment and its significance.

It’s not entirely unprecedented to bestow such a title to a sitting president. In the ’90s, Bill Clinton was dubbed America’s first black president.

“African-American men seemed to understand it right away,” Toni Morrison wrote in The New Yorker in 1998 about the Monica Lewinsky scandal that rocked Washington. “Years ago, in the middle of the Whitewater investigation, one heard the first murmurs: white skin notwithstanding, this is our first black President. Blacker than any actual black person who could ever be elected in our children’s lifetime. After all, Clinton displays almost every trope of blackness: single-parent household, born poor, working-class, saxophone-playing, McDonald’s-and-junk-food-loving boy from Arkansas.”

And in many ways, the shared connections or perceived ones that earned Clinton that title, mockingly or not, is part of why Sullivan has bestowed “First Gay President” upon Obama.

Sullivan writes that a black president who likely had to go through a period of self-discovery growing up as well as struggle for equality shared in some way the plight of gay Americans. As Obama eventually shattered the barrier of office to the “White” House, his announcement will allow gay Americans to shatter the stereotypes placed on them, Sullivan argues.

“Barack Obama had to come out of a different closet. He had to discover his black identity and then reconcile it with his white family, just as gays discover their homosexual identity and then have to reconcile it with their heterosexual family,” he writes. “The America he grew up in had no space for a boy like him: black yet enveloped by loving whiteness, estranged from a father he longed for (another common gay experience), hurtling between being a Barry and a Barack, needing an American racial identity as he grew older but chafing also against it and over-embracing it at times.”

This week’s column in The New Yorker, headlined “Wedding Bells,” argues that Obama’s announcement is on par with the importance of abolishing laws against interracial marriage in the 1960s.

Writer Margaret Talbot points to the Supreme Court’s 1967 decision in Loving v. Virginia that struck down anti-miscegenation laws, saying the acceptance of same-sex marriage is inevitable.

“One day, not long from now, it will be hard to remember what worried people so much about gay and lesbian couples committing themselves to marriage,” Talbot writes in the New Yorker.

“And, eventually, the Court will do the right thing on same-sex marriage, just as the President did last week. As in the Loving decision, the Court will reaffirm that the ‘freedom to marry has long been recognized as one of the vital personal rights essential to the orderly pursuit of happiness by free men.’ And it will finally uphold that freedom for gay and lesbian Americans.”