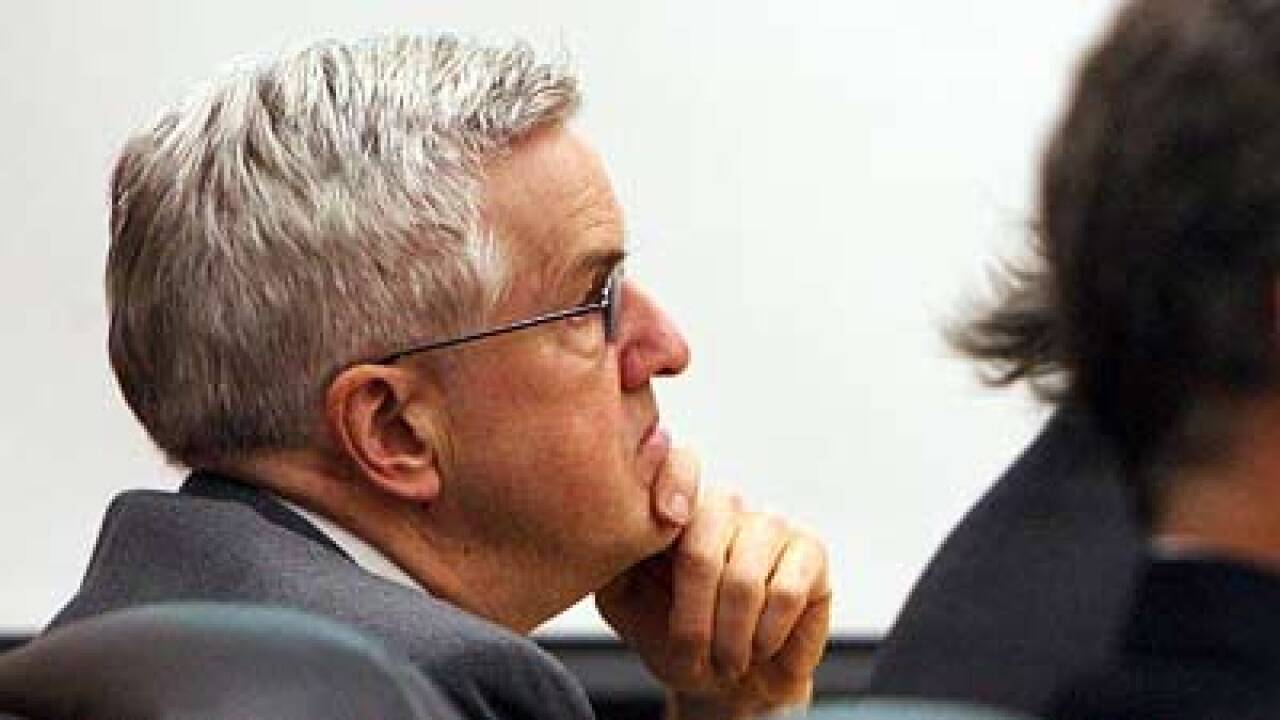 Defense attorney Mark Quigley held up an order to formally dismiss the child pornography charge against Steven Powell (the judge granted it last week). Prosecutors asked the judge to allow them to dismiss it without prejudice, meaning they could refile it. Defense attorneys objected.

The judge sided with the defense and signed the order dismissing it with prejudice (it cannot be refiled).

Court was recessed until tomorrow morning.

UPDATE 2:03 p.m. PST: "The word photograph is simply not applicable for the evidence that we've seen presented at this trial," Mark Quigley said, arguing for some changes to jury instructions.

Defense attorneys wanted it made clear to the jury that Steven Powell took the images only for his own sexual gratification, not to be shared. Prosecutors challenged it.

"Who else could it be?" Judge Culpepper asked.

After reviewing other issues, the judge took a brief recess to fix some paperwork. The defense asked for a formal order dismissing the child pornography charge.

UPDATE 1:45 p.m. PST: Defense attorneys asked the judge to dismiss 12 counts of voyeurism against Steven Powell, arguing that prosecutors failed to show that the illegal conduct occurred on multiple dates.

Prosecutors urged the judge to leave it up to the jury to decide.

"They're essentially trying to shift the burden of proof in this case," prosecutor Grant Blinn said.

He conceded that counts 8 & 10 in the indictment are essentially the same, but again urged the judge to let the jury decide and make it an issue at sentencing, if Powell is convicted.

"Anything else?" the judge asked the defense. When they shook their heads no, he moved on to jury instructions.

UPDATE 12:57 p.m. PST: Speaking to reporters outside of court, Chuck Cox admitted some frustration that his daughter was barely mentioned in the trial.

"We believe that she's a big part of this and she was certainly a victim," he said.

Cox said he was hoping some kind of information about Susan's disappearance would emerge.

"It feels like a colossal waste of my time," he said. "But they've been, Steve and Josh, have been over the last few years have done nothing but avoid answering for the things they've done."

Jennifer Graves said she was happy to testify against her father. She only looked at him briefly while on the witness stand.

"Probably better just not to look at him," she said.

Graves did not speak to her sister, Alina Powell, who has been in court throughout the trial in support of their father.

"Alina, there's really not much point. We're on two sides of the coin here," Graves said of her sister.

She left the courthouse surrounded by members of Susan's family.

More of their remarks coming up on FOX 13 News at Five.

The jury is excused for the day. Closing statements will begin tomorrow. The defense is filing a motion that will be heard at 1:30 p.m. PST.

Court is in recess.

UPDATE 10:25 a.m. PST: West Valley City Police detective Ellis Maxwell was recalled to the witness stand. He was asked a clarifying question about the video camera. Prosecutors wanted to show to the jury that it was the only camera that was seized, linking it to the crime.

Defense attorneys asked Maxwell if he could verify that any other camera was in the home. He said the only one he seized was the one in evidence.

For a moment, Steven Powell and his estranged daughter, Jennifer Graves, looked at each other. She appears very nervous.

Prosecutors showed her a number of exhibits. She described the layout of the home. She was asked who was living in the home.

"This looks like my dad's handwriting," she said, looking at a journal entry handed to her.

Currie asked her more specifically about who was living in the Powell household and when.

She was excused as a witness.

UPDATE 10 a.m. PST: Both detectives have finished testifying about searching Steven Powell's home. Conspicuously, they did NOT mention anything to the jury about Susan Cox Powell, the reason why they went to the home in the first place.

The judge has forbade most mentions of the missing woman, ruling it is not relevant to the case at hand (the alleged voyeurism of two neighbor girls).

Gray testified that he was assigned to review "Disc 12," which is the central evidence in this case. He viewed the images of the girls taking baths, etc., in their home.

"Open window in back of house, taking bath 1 and taking bath 2," Gray said, reading the file names. "They gave me cause for concern because they appear to be young juveniles."

"I also enjoy taking video shots of pretty girls in shorts and skirts. Beautiful women of every age. I sometimes use these images for self-stimulation," he reads from the entry.

Currie began cross-examining him by handing him his report and asking if he can say when the journal entry was made. He hands him a defense exhibit to clarify things. Currie notes the journal entry is from 2004. The alleged pictures were taken in 2006.

The judge calls a break in the proceedings while Jennifer Graves is taken to the courthouse. The defense has announced they do not plan to call any witnesses.

UPDATE 9:34 a.m. PST: West Valley City Police detective Ellis Maxwell is called to the Gwitness stand. He is the lead detective on the case of Susan's disappearance.

Maxwell said he assisted in the service of a search warrant on Steven Powell's Puyallup home last year.

"Did you actually go inside the house and assist with the search?" Pierce Co. prosecutor Bryce Nelson asked him.

"Yes, I did," Maxwell replied, adding that he went into Steven Powell's bedroom.

West Valley City police brought their evidence trailer. Things taken from the Powell home ultimately went back to Utah to be analyzed.

The prosecution's questions have avoided mention of Susan Cox Powell, the reason why West Valley City police went to Puyallup to search the Powell home in the first place. They were seeking Susan's diaries, which they believed could hold clues to her 2009 disappearance.

Maxwell was questioned about "Item 45," which is a disc that was found in Steven Powell's bedroom. It contains the images that prosecutors are using in the case: the photographs of underage girls.

In addition to "Item 45," Maxwell said he seized a camera. He said the serial numbers and pictures matched the model of the camera. The jury was shown pictures of the Sony Handycam that was seized from Steven Powell's bedroom.

Det. Maxwell testified that he spoke with the neighbor's (the alleged victims) and went into the house and took pictures facing into Powell's home. The jury was shown photographs of the girls' bathroom.

"That camera was used to take those images," Det. Maxwell testified.

Under cross-examination, defense attorney Travis Currie asked who was present in the home. Maxwell said many members of the Powell family.

Currie noted a distinction between the model number of the camera and the serial number, suggesting a similar camera could have been used.

Currie asked Maxwell about the images specifically, getting the detective to acknowledge that while sexually suggestive -- they did not contain images of nude, prepubescent girls.

Maxwell was excused as a witness.

UPDATE 9:00 a.m. PST: Steven Powell was escorted into the courtroom by three bailiffs. Chuck and Judy Cox are watching him. His back is turned to them.

Court should be getting under way shortly.

UPDATE 8:48 a.m. PST: Chuck Cox, the father of Susan Cox Powell, is now in the courtroom. He is chatting with members of "The Gargoyles," a local biker club that frequently appears in court to show support for abused children.

UPDATE 8:35 a.m. PST: Prosecutors and members of the West Valley City Police Department walked into the courtroom. They were followed by Judy Cox, the mother of Susan Cox Powell.

TACOMA -- The voyeurism trial of Steven Powell is expected to wrap up today with witnesses from the West Valley City Police Department and his estranged daughter, Jennifer Graves, testifying.

The father-in-law of missing West Valley City mom Susan Cox Powell is facing 14 counts of voyeurism. He is accused of taking photographs of two neighbor girls back in 2006. The jury saw pictures of the girls that police said was taken in their bathroom without their knowledge. They were using the restroom, bathing or changing clothes.

The judge has prohibited prosecutors from introducing evidence they claim shows Susan Cox Powell as a voyeurism victim. He also blocked introduction of journal entries that reveal Steven Powell's obsession with his daughter-in-law.

West Valley City police and Pierce County Sheriff's deputies served a search warrant on Steven Powell's Puyallup home. They were originally searching for diaries that belonged to Susan Cox Powell that they believed could give clues about her disappearance. Utah authorities analyzed the computers seized from Steven Powell's home and claimed to have found thousands of images of women and girls, taken without their knowledge.

Prosecutors are expected to wrap up their case today. Defense attorneys have reminded the jury that the burden of proof is on the state and have suggested they may present no defense. Steven Powell is not expected to testify.

Susan's family has been hopeful that the trial could yield some clues into her 2009 disappearance. Susan's husband, Josh Powell, considered by police to be a "person of interest" in her disappearance, killed himself and their children in an explosion and fire at a Graham, Wash., home on Feb. 5.

Susan's family has told FOX 13 they believe Steven Powell had some knowledge of her possible whereabouts.

Check back here for updates throughout the day on the Steven Powell trial. You can also follow FOX 13's Ben Winslow for real-time updates on Twitter.

Read the jury questionnaire in the Steven Powell trial.