FAQ about coffee, longevity, sugar and stupidity. And also vampires. 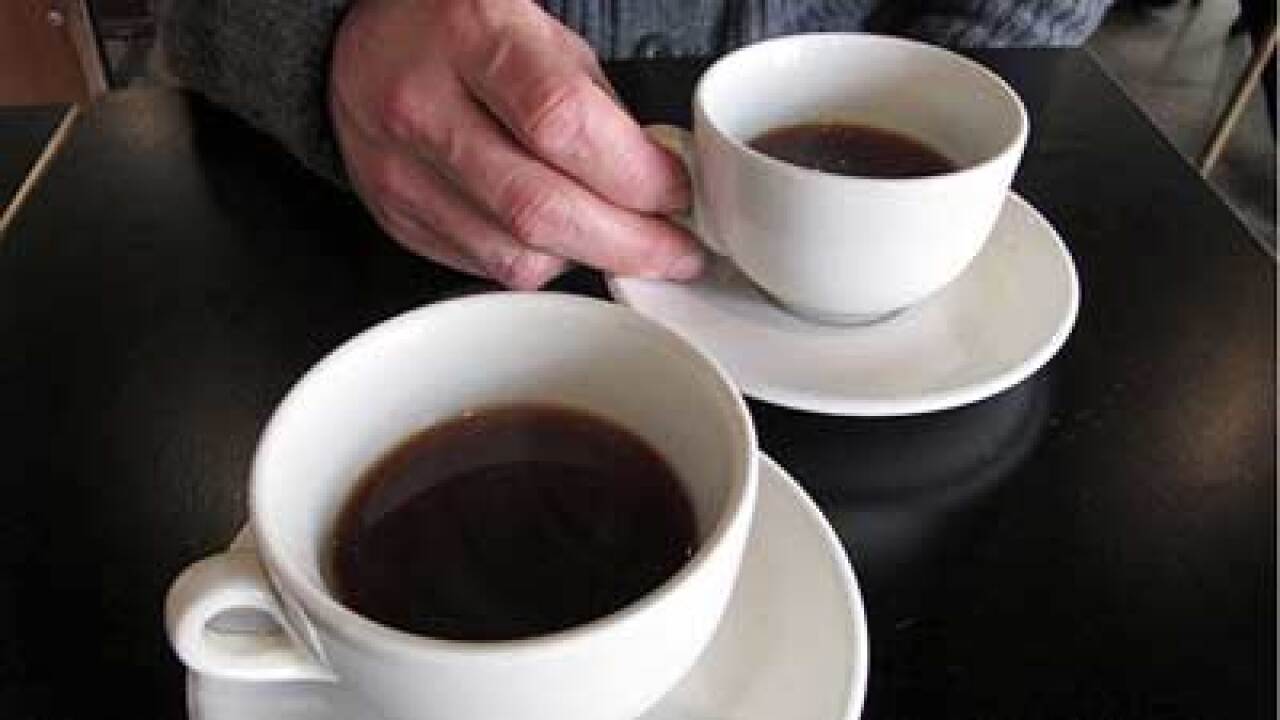 Eatocracy Editors
(CNN) — The New England Journal of Medicine has just released a study indicating that increased coffee consumption is linked to longer lifespans. The Intramural Research Program of the National Institutes of Health, National Cancer Institute, Division of Cancer Epidemiology and Genetics funded the research, which tracked 400,000 healthy men and women between the ages of 50 and 71 for up to 13 years.

Researchers found that people who consumed two or more cups of coffee a day are less likely to die from certain diseases than people who drink little or no coffee. But before you grab your mug and fight off the hordes stampeding to the break room, here are a few things you should consider.

Q: What about coffee did the researchers find beneficial?

A: Researchers didn’t actually figure out what the specific benefits of coffee were – though it does contain unique compounds and antioxidants that may defend against various diseases.

Q: If you drink six cups a day, are you getting greater health benefits than someone who drinks just two?

A: Women who drank two or three cups of coffee a day were 13 percent less likely to die at any age than those who drank no coffee at all. Bump that up to four or five cups, and the percentage jumped to 16. Male coffee drinkers seemed to decrease their risk by 10 percent. The research indicates that every cup – and they studied people drinking up to six a day – upped the chances of living longer.

Q: So, if I hook up an IV bag of coffee to my veins under the light of a full moon, will I cheat death and transform into a coffee vampire, impervious to death and decay?

A: Yes. That is exactly what will happen.

Okay, no. The study didn’t definitively prove that coffee will extend longevity – just that there seemed to be a link. It was observational rather than clinical, but it definitely gives researchers reason to delve further into the causality.

It’s also worth noting that coffee should be filtered rather than boiled because the process strips out compounds that raise the “bad” LDL cholesterol that increases risk of heart attacks from sudden blood clots in narrowed arteries. So make sure there is at least one outlet for your coffeemaker in your crypt or coffin.

Q: Are researchers indicating that this study suggest that benefits outweigh the negative effects of coffee?

A: There is risk in overconsumption of anything, and the high blood pressure associated with caffeine is still a risk. Luckily for caffeine-averse immortality seekers, decaf coffee was just as effective.

People also increase their dairy and sugar intake when they’re drinking coffee, and that packs its own risks including obesity and stupidity.

Q: Uhhh…stupidity? What the what?

A: In a recent UCLA study, researches studied two groups of rats, trained on a maze twice daily for five days. Then one group consumed a fructose solution as drinking water for the next six weeks, and the other ingested the same – with the addition of omega-3 fatty acids in the form of flaxseed oil and docosahexaenoic acid (DHA). DHA is crucial for essential for synaptic function, or making brain cells communicate with each other, learn and remember.

After the feeding cycle, the rats that had consumed the omega-3-amped diet navigated the maze much faster than those that hadn’t. The non-DHA group also developed signs of resistance to insulin, which regulates blood sugar. This may disrupt learning and cause memory loss, and the researchers believe that fructose is the culprit.

A: But I’m not pouring sugar into my 57 cups of coffee per day, so I should be good on that front, right?

Q: Sugar is a sneaky critter. Even if you’re not chowing down on little chocolate donuts or mainlining jelly, you may be taking in more than you bargained for – especially if you eat a lot of pre-packaged food. Many low-fat and fat-free dressings, canned soups, jarred sauces, those supposedly healthy smoothies and even breads are loaded with fructose. It’s up to you, the consumer, to stand in the aisle and squint at the labels.

Q: : Flax seeds and oil, beans, mustard greens, wheat germ, olive and canola oils and winter squash are all smashing sources of omega-3, but the very best dish is fish. Mackerel, lake trout, herring, bluefin tuna and salmon contain the greatest amount, while haddock, red snapper, swordfish and sole are better than nothing, but don’t boast much of a benefit.

So consider having a butternut squash and walnut muffin with your deep, dark, sugarless cup(s) of coffee. And some garlic to ward off the vampires.