Remembering the fallen on Memorial Day 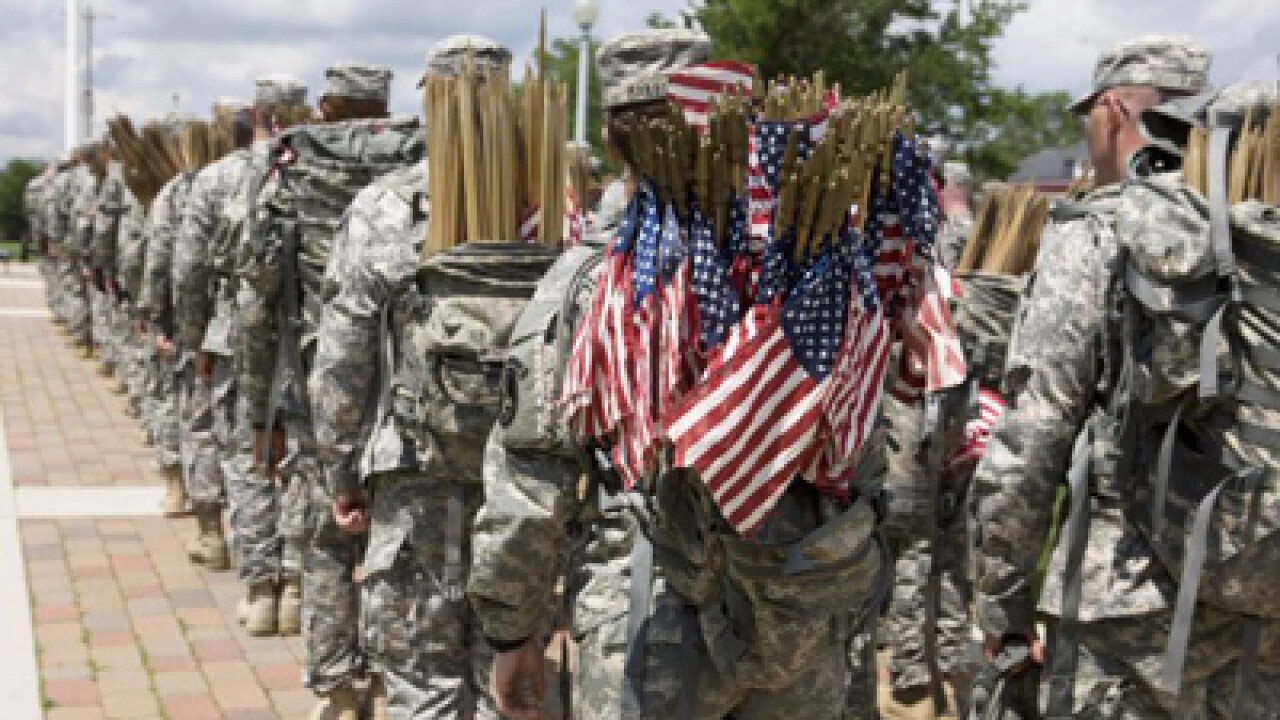 Thank you for your service.

We say those words more frequently now -- when we see men and women in uniform at the airport, when we accept a paper poppy from a veteran at the supermarket, when we sit next to a member of the military at a ballgame.

Thank you for your service.

It's a nice gesture, true, but small. We say it, but then most of us go back to the rest of our lives. It's a volunteer military these days, after all; we don't have to serve, and we don't have to remember.

We don't have to think about the sacrifices. But we must.

She with thin form presently drest in black, By day her meals untouch'd, then at night / fitfully sleeping, often waking, In the midnight waking, weeping, longing with / one deep longing, O that she might withdraw unnoticed, silent / from life escape and withdraw, To follow, to seek, to be with her dear dead / son. -- Walt Whitman, "Come Up From the Fields, Father"

Since Memorial Day was first observed in 1868 as Decoration Day, initially a way to honor Civil War dead, more than 600,000 U.S. servicemen and women have died in war. Millions more have served. They all went marching into the unknown, and not all of them came back.

When they're gone, their loved ones must carry on. Taryn Davis' husband, Army Cpl. Michael Davis, was 22 when he died in Iraq five years ago. She was 21. She was young, she was told; she'll meet someone else, marry someone else. She was given the names of support groups, but they were filled with people much older. She felt adrift.

It wasn't until she met the widow of one of her husband's comrades that she found her way forward.

Davis founded the American Widow Project, "dedicated to the new generation of those who have lost the heroes of yesterday, today and tomorrow," according to its website. Through it, Davis has helped people like her connect. And through it, she has found new meaning.

"They've given me the gift of life again," she said.

Jay Choe is part of an uncommon group: widowers of war, a creation of the changing landscape of the U.S. military, as CNN's Wayne Drash observed. Choe is also the father of a young girl.

"I was thrust into a role I wasn't familiar with," Choe said.

The years since have been difficult. Most challenging has been raising his daughter as a single father. But, Choe says, the two share an unbreakable bond.

"We've been through so much together and in so many uncharted territories together."

"If truth is the main casualty in war, ambiguity is another." -- Paul Fussell, "The Great War and Modern Memory"

We want our war stories to be clean, to be triumphant tales of good over evil, shorn of shades of gray.

But war is messy. So is memory.

Karl Marlantes had trouble forgetting. To his family and friends, he was an honored ex-Marine, the business consultant with the medals. But Marlantes was haunted by his experiences in Vietnam. He had nightmares. He felt guilt. He could get angry.

He was suffering from post-traumatic stress disorder. Counseling made a difference; so did faith. He's written two books about his experiences, a novel and a memoir, books that are both inspirational and cautionary. Now he wants others to remember, too.

"When the peace treaty is signed, the war isn't over for the veterans or the family," he says. "It's just starting."

Braydon Nichols, on the other hand, always wants to remember. Nichols was the 10-year-old boy from Missouri who lost his father, Bryan, in Afghanistan and sent an iReport to CNN as a way to commemorate him. The story inspired more than 230 iReports and received thousands of responses. Not only is there a college fund for Braydon; the Special Operations Warrior Foundation set up accounts to handle college tuition and room and board expenses for the children of every Army family who died in the Chinook helicopter crash that killed Braydon's father, an Army officer.

Braydon, for the most part, is doing well. But his uncle, Monte Nichols, says the boy's father remains in the family's heart.

"Bryan is with us all the time, every day his memory is alive for us."

Memory is important. Rose Mary Sabo Brown spent just one month with her husband, Army Spec. Leslie Sabo Jr., before he left for Vietnam in 1969. Six months after that, he was dead.

It took more than 42 years, but Leslie Sabo Jr. was finally awarded the Medal of Honor earlier this month for his bravery in battle. He'd been recommended for it by his unit, but somehow the recommendation was overlooked. President Obama presented the medal to Sabo Brown on May 16.

"I've never stopped thinking about him," she said of her late husband. "My heart is filled with pride that you can't even imagine."

Pride. Pain. It's a terrible double-edged sword, memory is. At its best, it fills us with tenderness; at its worst, it racks us with grief. And when it comes to the fallen, it's hard to face the blade.

But some people, we should recall, don't have a choice.

"The thing about remembering," wrote Tim O'Brien in "The Things They Carried," "is that you don't forget."