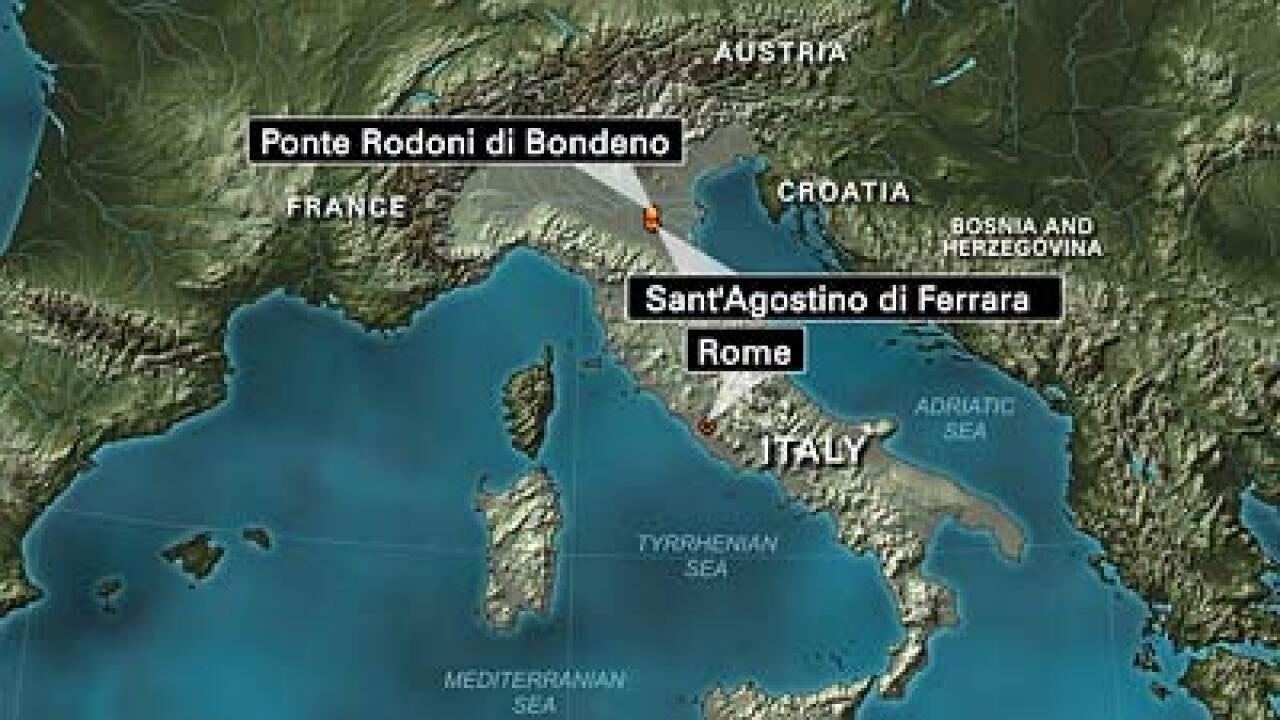 ROME (CNN) — At least 15 people were killed and some 200 injured in a 5.8-magnitude earthquake in northern Italy on Tuesday, Italian news agency ANSA reported.

The earthquake came nine days after a 6.0-magnitude quake in the same region killed seven people.

Italian civil protection authorities confirmed at least 10 people had died and predicted the number would rise as rescue workers search for survivors in the rubble. Several people are missing, ANSA reported.

Tuesday’s quake was followed by dozens of aftershocks. Italy’s Institute of Geology said the aftershocks measured 5.3 and 5.1 magnitude. The U.S. Geological Survey recorded one aftershock of 5.6 magnitude just before 1 p.m. local time.

Tuesday’s earthquake was centered in the province of Modena, near Bologna. The towns of Mirandola and Cavezzo were closest to the epicenter, civil protection authorities said.

Eyewitnesses reported on Twitter that Cavezzo was about 70% destroyed. Pictures purportedly from the town, as well as a video stream from Italian newspaper Corriere de la Serra, show a number of damaged buildings and some structures destroyed. The top of one church steeple was missing, and police tape was strung across several areas.

“People are very scared. It’s been shaking nonstop for the past week,” said journalist Andrea Vogt, who was near the epicenter.

“We don’t know how many are still trapped,” she told CNN. “Telephone lines are overloaded. It’s difficult to get through to emergency personnel.”

The earthquakes in the last 10 days have been “a real shock” to locals, she said, adding that no one could remember so many quakes in such a short period of time.

“Factories were full. Many of the workers were working on repairs to the already damaged buildings,” said Vogt, a freelance journalist based in Bologna.

A spokeswoman for the prefecture, or government office, in Modena said as many as 12,000 people could be displaced, including those affected by the previous earthquakes.

Authorities are already working to set up more tent camps to house those forced from their homes, she said, and many hotels and campsites have also offered space to those in need.

Italian Prime Minister Mario Monti was in a meeting discussing last week’s earthquake with the head of the civil protection agency and the governor of the region when the new earthquake hit.

“The state will do all what needs to be done, in the quickest way, to assure the return to normal life to such a special and productive region of the country,” Monti said in a televised statement.

“Some buildings that were damaged already in last week’s earthquake were affected again today. San Felice sul Panaro and Mirandola registered most of the damage,” a spokeswoman said.

Eyewitness Violetta Galia said she was afraid to remain in Bologna after the tremors.

“We’ve been having many quakes, so it’s not safe to go back to work. We are having problems with communications, so it’s not easy to get in contact with somebody by phone,” she told CNN via Skype.

“I don’t feel safe — I need to go away, I don’t want to live (in) Bologna. If I don’t leave Bologna, I will never feel safe because we are still having quakes every three or five minutes.”

CNN iReporter Martina Lunardelli, a freelance translator and interpreter, said she was at work in Pieve di Soligo, Italy, when she felt the earthquake.

She described her fear and bewilderment as it struck, saying she heard “that thunder sound and my head spinning fast, as if I was drunk and could not see the others around since they were out of focus. I felt so strange.”

At least 40 other aftershocks, most shallow and with a magnitude of 2 to 3, shook the region Tuesday, according to the Italian geological service.

A spokeswoman for the prefecture in Ferrara province said people were in need of urgent help.

“We need tents. The number of displaced is increasing. It will take time to check if homes are safe, and also people are terrified and don’t want to sleep in their houses,” she said.

“We had enormous damage to all our factories, and there will be dramatic consequences on employment.”

The area’s cultural heritage has also suffered, she said, with two churches destroyed in the village of Cento and another church facade collapsing.

Many buildings that were damaged in the previous earthquake were unable to withstand the latest tremors. Others have been left unsafe, many of them churches and older buildings with ornamental stonework.

Authorities face an additional logistical challenge in helping local communities because emergency supplies are already depleted from the response to the earlier quake.

Some railway routes were affected by the earthquake, but Trenitalia, the Italian train system, said late Tuesday afternoon that all had been reopened and that train circulation was going back to normal.

Some high-speed services from Bologna to Milan and Florence, among others, were running at slower speeds earlier in the day.

Northern Italy is the heartland of the country’s manufacturing industry.

“It’s going to have an economic impact as well as a human impact,” Vogt said of the earthquake.