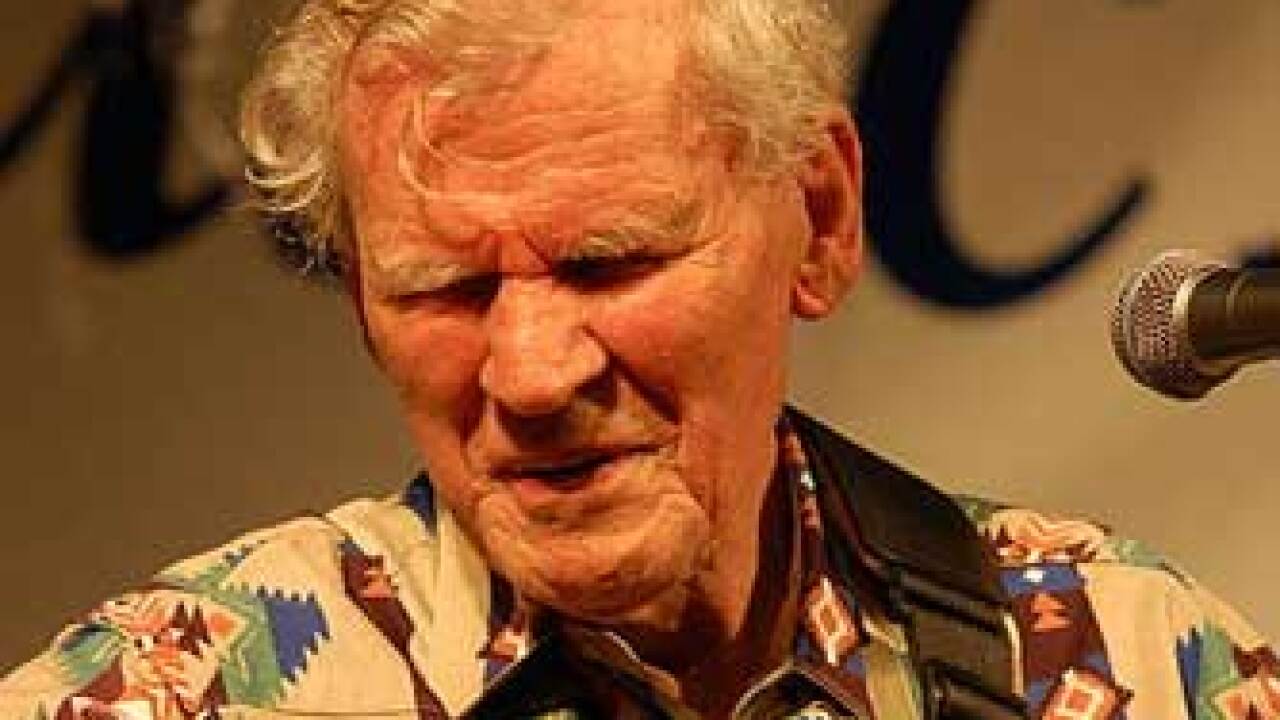 (CNN) — Doc Watson, the bluegrass music legend from Appalachia who was renowned for his flatpicking and fingerstyle technique on the acoustic guitar, died Tuesday at a hospital in North Carolina, according to Mary Katherine Aldin of Folklore Productions, which represented the singer. He was 89.

Watson, a Grammy winning musician who was blinded after birth, had been struggling to recover from May 24 colon surgery and then a followup procedure two days later. The Winston-Salem Journal had reported that Watson’s family was called to his bedside Sunday at Wake Forest Baptist Medical Center after he took a turn for the worse.

The website of Folklore Productions, which is run by the singer’s representative, Mitch Greenhill, had been providing updates on his difficult recovery.

Watson, who jumped onto the music scene in the early 1960s, is considered influential among folk musicians for his brand of bluegrass, blues, country and gospel music. He won seven Grammy awards and, in 2004, a Grammy Lifetime Achievement Award. He was inducted into the North Carolina Music Hall of Fame in 2010.

“Watson’s immense talent and spirit will be deeply missed, and our sincerest sympathies go out to his family, friends and all who were inspired by his music,” said a statement from Neil Portnow, president/CEO of The Recording Academy, which awards the Grammys.

Watson, whose mother sang around the house and whose father was a banjo player and vocalist who led the singing at their Baptist church, was a fingerstyle player who used a thumbpick for bass and a fingerpick for the treble strings — a “two-finger” style that was self-taught.

As a flatpicker, he used a traditional tear-shaped medium gauge nylon flatpick and was known for his speed, tone and precision — with a little extra arm motion.

Born Arthel Lane Watson in Stoney Fork Township, near Deep Gap, North Carolina, on March 3, 1923, Watson was blinded from an eye infection as a baby. He toured with his son Merle before Merle’s death after a farming accident in 1985, and continually played at an annual festival called MerleFest in his son’s honor.

Watson got his nickname during a live radio broadcast.

“The announcer remarked that his given name Arthel was odd and he needed an easy nickname,” according to a biography on the North Carolina Music Hall of Fame website.

“A fan in the crowd shouted ‘Call him Doc.’ The name stuck ever since.”

Watson credited his own father for helping him get his start in music.

“One day he brought (a banjo) to me and put it in my hand and said, ‘Son, I want you to learn how to play this thing real well,” Watson told National Public Radio’s Terry Gross in 1988. “It might help you get through the world.”

Watson was steeped in music as a child, from the time his mother held him in her arms at the Mount Paton Church and he listened to the harmony and shape-note singing of such songs as “The Lone Pilgrim” and “There is a Fountain,” according to a 1998 article in Flatpicking Guitar Magazine by Dan Miller.

In 1947, Watson married Rosa Lee Carlton, the daughter of an old-time fiddler, and they had two children, Eddy Merle (named after Eddy Arnold and Merle Travis), born in 1949, and daughter Nancy Ellen, born in 1951.

When his son died in 1985 at the age of 36 in the tractor accident, Watson was devastated and vowed to quit playing music — an experience that would turn his life upside down.

His son, a music partner, was “the best friend I ever had in this world,” Watson said, according to Miller’s magazine article.

According to Miller, Watson told Acoustic Musician magazine in 1997: “The night before the funeral I had decided to quit, just give up playing. Well that night I had this dream.

“Now, usually I do have some light perception, but in this dream it was so dark I could hardly stand it. It was like I was in quicksand up to my waist and I felt I wasn’t gonna make it out alive.

“Then suddenly this big old strong hand reached back and grabbed me by the hand and I heard this voice saying, ‘Come on Dad, you can make it. Keep going.’ Then I woke up. I think the good Lord was telling me it was all right to continue with my music. It’s been a struggle, but I still have the love for the music,” Watson told Acoustic Musician.

That same year, 1997, Watson received the National Medal of the Arts from President Clinton.

CNN’s Ed Payne and David Ariosto contributed to this report.