SUMMIT PARK, Utah - Residents of Summit Park have had a wild visitor over the last few weeks.

Travis Hobbs says he thought the animal wandering his neighborhood last Thursday was a dog at first, but a second glance disproved that guess. Their 'dog' turned out to be a young bear.

"I pretty much thought it was a dog at first and then it walked into a clear spot and it was a lot bigger than a dog," said Hobbs. "I was with my mom my brother and my dad was over there. what did you say to each other we said wow that's amazing."

Neighbors have spotted the bear ambling down paths and even checking out their decks throughout the holiday weekend.

Wildlife officials set up traps in case the animal returned, and they were able to trap it early Wednesday morning. They tranquilized the bear and relocated it.

Since it was a young animal and hadn't harmed anyone, officials were able to transport it to a new home in Spanish Fork Canyon. 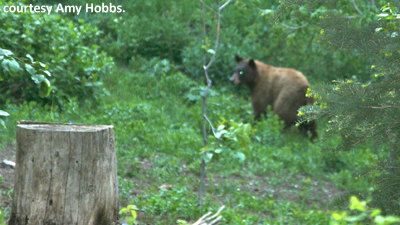