Get ready for the ‘Transit of Venus’ 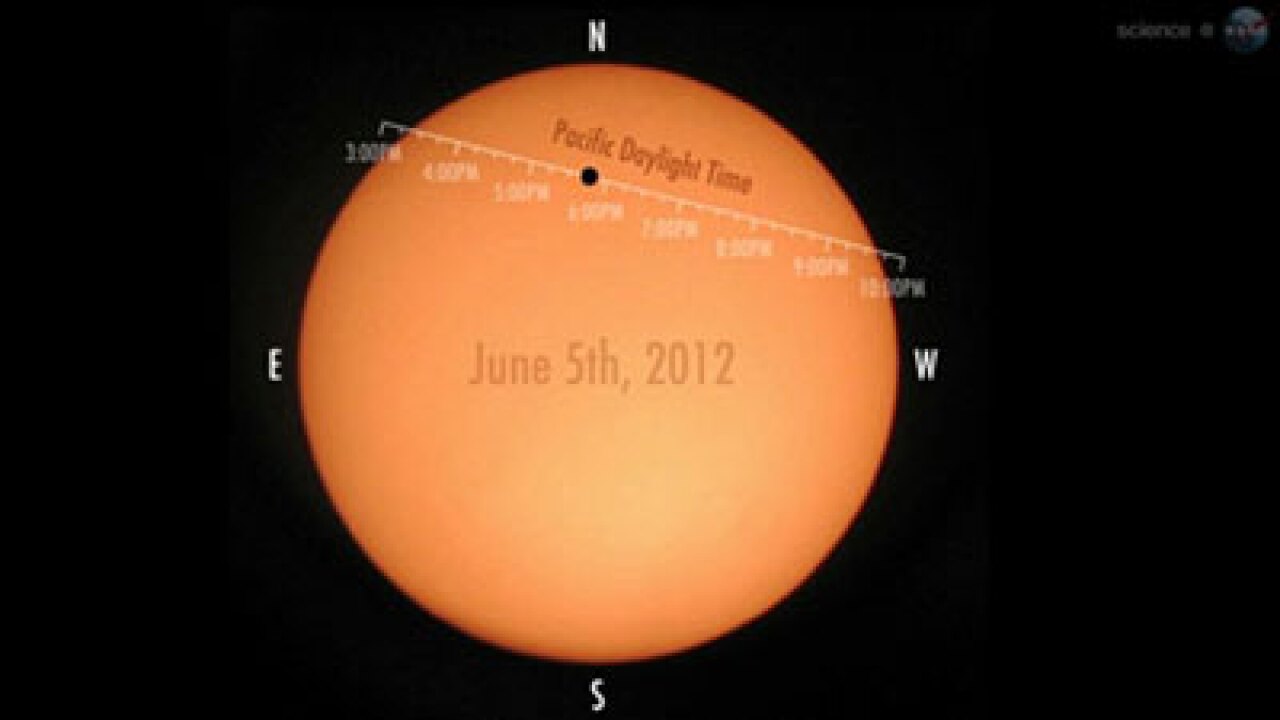 On Tuesday, June 5th, Venus will cross the face of the sun. The transit will take about seven hours and begin at 6:09 p.m. EDT.

By Kim Segal
(CNN) — There’s a lot of excitement surrounding the “Transit of Venus,” even though this rare astronomical event will yield little scientific value.

On Tuesday, Venus will cross the face of the sun. The transit will take about seven hours and begin at 6:09 p.m. EDT.

The next time Venus journeys across the sun will be in the year 2117, says Jack Lissauer, Kepler Mission co-investigator and planetary scientist at NASA Ames Research.

“This is the last chance for almost everybody unless we have huge medical advances,” Lissauer says.

In 1769 Capt. James Cook set up an observation point in Tahiti, French Polynesia, where he collected data on Venus during the transit that took place over 243 years ago. To this day, the place Cook observed Venus’ trek across the sun is known as Point Venus.

Tour operators are advertising trips to Point Venus to watch this once-in-a-lifetime event. “To be on the same spot that Cook was in the South Pacific, there’s a real unique historical significance to that,” said Nick Panza, vice president for Air Tahiti Nui, when asked about the company’s vacation package. “For that reason we think it’s the best place in the world to observe it from.”

For those who want to watch the entire six-hour, 40-minute transit, Tahiti is a good place to be. “If you are in a certain part of the globe, and this includes Alaska and much of the Pacific and eastern Australia and some of northeast Asia, you can see the entire transit,” Lissauer says.

It may be tempting, but please follow this warning: DO NOT STARE AT THE SUN.

If you want to look at the transit before sunset, you need a special pair of glasses, a telescope with a special filter or a pinhole camera so you do not damage your eyes.

If you are worried about your eyes or you can’t make it to Tahiti to watch the entire transit, you can still witness this rare event. NASA will be providing a webcast from the summit of Mauna Kea in Hawaii.

Viewers in the mid-Pacific will have great views in particular because the sun will be high overhead during the crossing. And in the United States, sunset will offer the best views.

At sunrise in 2004, the end of the Transit of Venus was visible in the eastern United States. This time it will be sunset when people throughout the contiguous United States will be able to observe part of the transit. According to Lissauer, sunset is the best time to watch because you can observe Venus with the naked eye.

“When the sun is very close to the horizon and it is very red and you can normally look at the sun without hurting your eyes,” Lissauer says. “Then you can actually look at the sun directly and you will see this little circle caused by Venus blocking part of the sun’s light.”

This event may be more historical than scientific, but it is one astronomical event that can be enjoyed by all.

Past Transits of Venus were used to understand the size of the solar system and the distance between planets, Lissauer said.

“It’s an interesting and unusual astronomical event, one that people can see actually with their own eyes, and it has a lot of historical significance.”