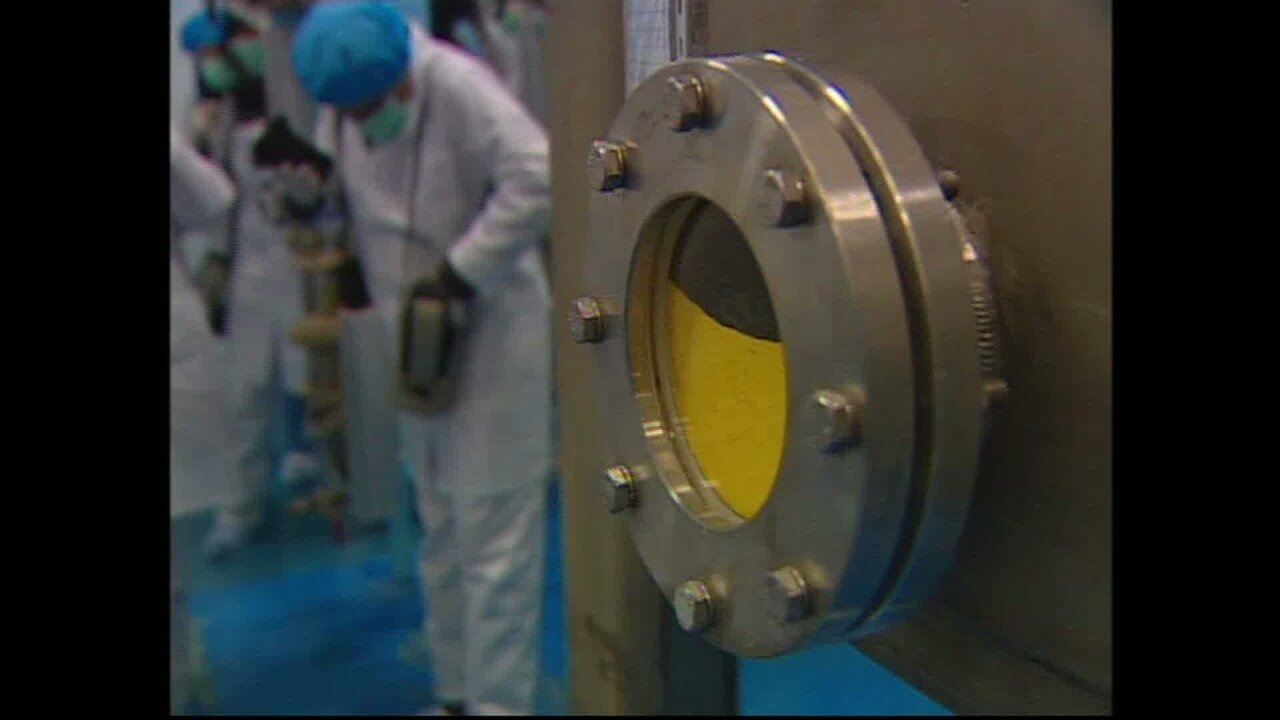 A form of enriched uranium known as “Yellowcake” is seen in a nuclear facility in Natanz, Iran. Yellowcake is used in fabricating fuel for nuclear reactors, according to the U.S. Nuclear Regulatory Commission. Image via CNN.

(CNN) — The FBI has launched an investigation into apparent leaks of classified information involving a cyberwarfare program against Iran, a U.S. official said Wednesday.

FBI spokesman Paul Bresson had no comment on the reported investigation.

Sen. Saxby Chambliss, ranking Republican on the Senate Intelligence Committee, said he was informed that an FBI inquiry was under way.

The senator from Georgia and other leaders of the House and Senate Intelligence Committees issued a joint statement Tuesday deploring the apparent leaks.

“These disclosures have seriously interfered with ongoing intelligence programs and have put at jeopardy our intelligence capability to act in the future. Each disclosure puts American lives at risk, makes it more difficult to recruit assets, strains the trust of our partners and threatens imminent and irreparable damage to our national security in the face of urgent and rapidly adapting threats worldwide.”

The House and Senate Intelligence Committee leaders said they intended “to review potential legislation to strengthen authorities and procedures with respect to access to classified information and disclosure of it, as well as to ensure that criminal and administrative measures are taken each time sensitive information is improperly disclosed.”

“We also intend to press for the executive branch to take tangible and demonstrable steps to detect and deter intelligence leaks, and to fully, fairly, and impartially investigate the disclosures that have already taken place.”

The White House pushed back against suggestions it could be leaking classified information for political purposes.

“This administration takes all appropriate and necessary steps to prevent leaks of classified information or sensitive information that could risk ongoing counterterrorism or intelligence operations,” spokesman Jay Carney said Wednesday aboard Air Force One as the president traveled to campaign events on the West Coast.

“Any suggestion that this administration has authorized intentional leaks of classified information for political gain is grossly irresponsible.”

Asked about the White House’s response, Sen. John McCain told CNN International’s “Amanpour,” “I would expect nothing else from the White House. But the fact is that the portrayal of the president in these stories is nothing short of heroic.”

McCain said that he has “great faith” in the FBI but that a matter as weighty as national security “probably deserves a special counsel.”

He continued, “It’s clear that the Iranians will profit from having this information. In fact, they might even feel they are justified in cybercounterattacks.”

Feinstein told CNN’s “The Situation Room with Wolf Blitzer” that she didn’t believe any of the information came from the top ranks of the White House.

“I think one of the problems is, information is not closely held sufficiently,” she said. And she described policies regarding responding to leaks as “archaic” and said they need to be revamped.

The government’s failure to keep its secrets has dissuaded some people from giving information to the United States and has endangered lives, she said, but she is unaware of anyone having been killed as a result. She would not go into specifics.

“People just talk too much,” she said. “This didn’t used to be the case. But suddenly it’s like it’s a spreadable disease.”

A report in The New York Times on Friday provided classified details of what it described as a U.S cyberattack targeting Iran’s nuclear centrifuge program.

Since shortly after he became president, Barack Obama has ordered cyberattacks targeting computers that run Iran’s nuclear enrichment facilities, the report said, attributing the information to participants in the program.

The White House has said it did not authorize any leak of such information.

Some Republicans, including McCain, have called for a special prosecutor to investigate.

But Deputy Attorney General James Cole, in response to a question from Sen. John Cornyn, R-Texas, said Wednesday that he does not believe a special prosecutor is needed in this case.

Chambliss said he expects the FBI to conduct a “full and fair investigation, including a review of administration officials who have been quoted anonymously or directly.”

Feinstein said she had discussed the possibility of a joint hearing with Levin.

On Tuesday, White House deputy press secretary Josh Earnest said the administration believes that classified information should remain secret for a reason, and “publicizing it would pose a threat to our national security.”

McCain and Chambliss cited other recent leaks as well, including information on the administration’s efforts to expand its drone program and the president’s involvement in “kill lists” against militants in Yemen and Pakistan.