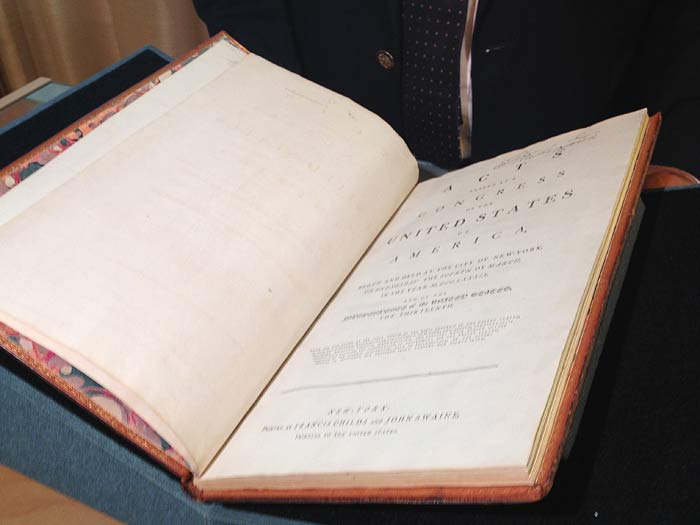 By Greg Seaby
(CNN) — A priceless piece of American presidential history will go on sale next week in New York.

President George Washington’s personal copy of the Acts of Congress, including the United States Constitution and a draft of the Bill of Rights with his own handwritten notations will be sold at auction.

It is estimated to fetch between $2 million and $3 million, according to Christie’s Auction House.

“It gives us a very clear picture of the first president and his determination to be president according to the rules bound by the Constitution and later by the Bill of Rights,” said Chris Coover, senior specialist in books and manuscripts at Christie’s.

“It’s unique. There is nothing like it. This is the only annotated Constitution that Washington ever did and it’s a wonderful evocation of a great man,” Coover said

The presidential artifact was specially printed and bound for the first American president in 1789. Two similar versions were created for Secretary of State Thomas Jefferson and Attorney General John Jay.

President Washington wrote notes in pencil that are still visible in the margins of the text. Washington’s signature is also on the cover page.

“These notations highlight key passages concerning the president’s responsibilities, testifying to Washington’s careful, conscientious approach to his powers and responsibilities in his groundbreaking first term,” according to Christie’s.

The 223-year-old presidential volume includes an engraved bookplate with the Washington family crest emblazoned on a marbleized inside cover.

This piece of American history was part of the personal archive of noted collector H. Richard Dietrich, Jr. The historic volume is being sold by his estate, according to Christie’s.

The book was part of the president’s personal library held at Mount Vernon until 1876. It was sold at auction and has had several notable owners since that time, including William Randolph Hearst and the Heritage Foundation, according to Christie’s.

Bidding for George Washington’s Annotated Copy of the Constitution and Bill of Rights, 1789, opens at 12:30 p.m., Friday, June 22 in Rockefeller Plaza.