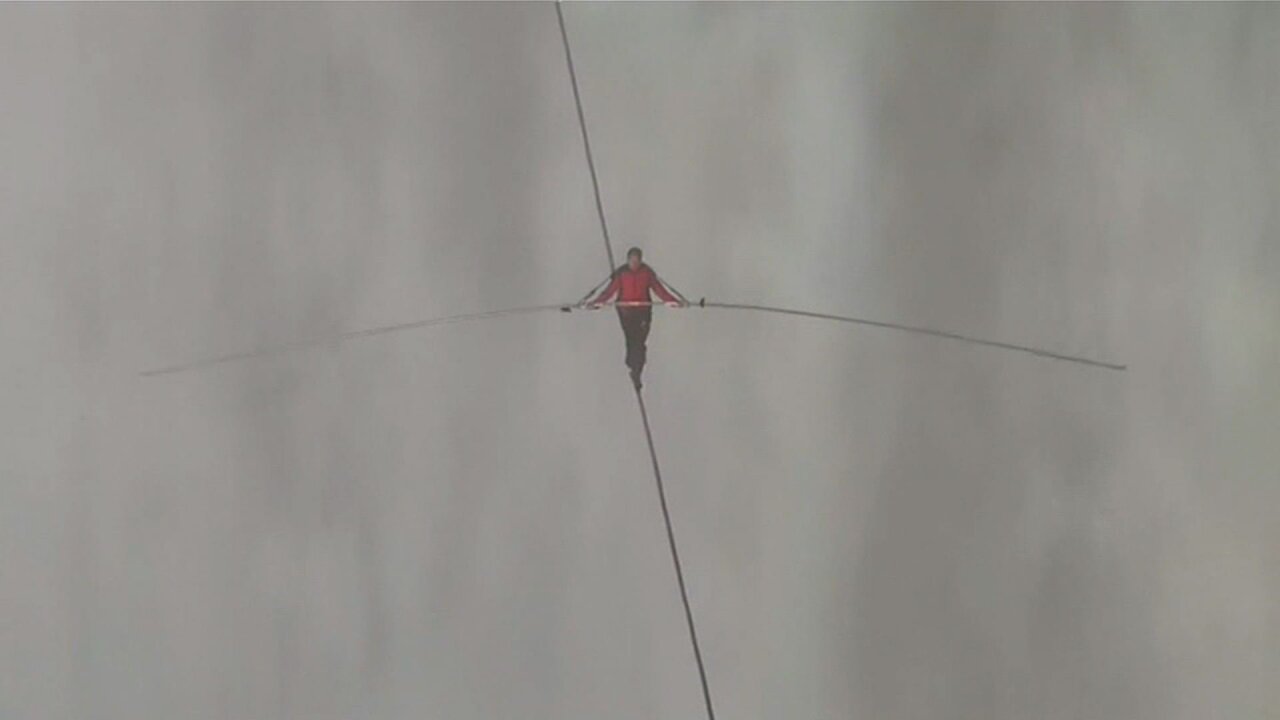 Aerialist Nik Wallenda walked across Niagara Falls on a tightrope late Friday June 15, 2012. “I’m extremely blessed to be where I am,” the daredevil said.

(CNN) — Cloaked in darkness and enveloped by mist, aerialist Nik Wallenda walked across Niagara Falls on a tightrope late Friday and into the record books.

It was a historic walk that observers say was in line with his appetite for the extreme and the high-wire customs of his “Flying Wallendas” family.

Pumping his fist in the air, Wallenda sprinted the last few steps on the wire. After touching down on Canadian soil, he embraced his family, grinning ear to ear.

“It hasn’t sunk in yet,” he told ABC, which broadcast the event. “This is something that I’ve played over and over in my mind for the last 20 years, and to finally be here at this point, it is very surreal. As I said as I left that wire, I’m extremely blessed to be where I am.”

Wallenda described the difficulties of dealing with the wind and heavy mist.

“It’s all about the concentration, the focus, and it all goes back to the training. You know, in the middle of the wire at one point, I just started thinking about great-grandfather and paying tribute to him and all the walks that he did,” he said.

His great-grandfather Karl Wallenda was killed at the age of 73, attempting to walk between two buildings in Puerto Rico in 1978.

When asked by ABC how he planned to top the walk over Niagara Falls, Wallenda said he hopes to become the first person in the world to walk a tightrope across the Grand Canyon, in Arizona.

Thousands were on hand to watch Wallenda teeter his way on the 2-inch-wide wire over Horseshoe Falls toward Canada. He wore a harness at the insistence of those sponsoring the event, officials say, despite what he said was his desire to walk without a safety rig.

Wearing a red and black rain jacket and a balance pole around his neck, Wallenda appeared calm and focused as he took small steps, gingerly placing one foot in front of the other.

Wallenda, who hails from multiple generations of high-flying daredevils, had a near fall as he stumbled on a tightrope above Baltimore’s Inner Harbor earlier this year.

“It’s been a dream of mine for a long time,” Wallenda told CNN before the Niagara Falls attempt. “I’m one of those people who always tries to overachieve. I want to do more. I want to do bigger things.”