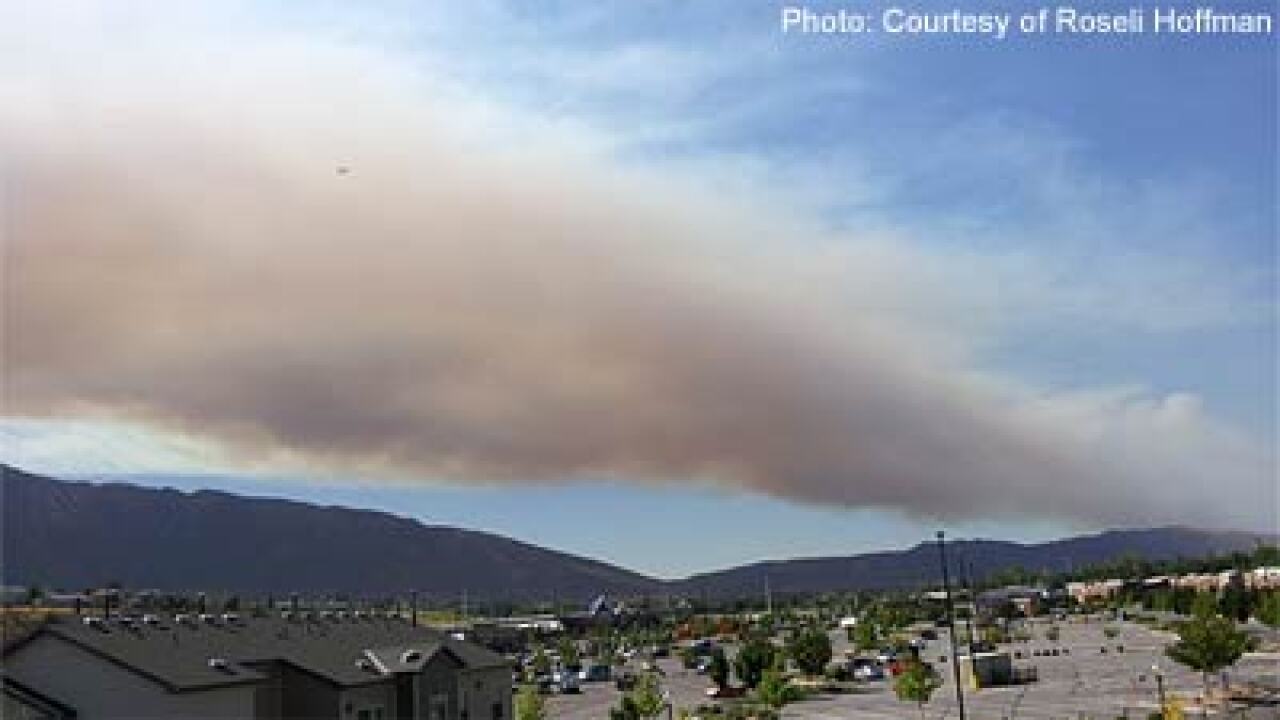 UPDATE (June 25, 10:49 a.m. MDT): The Dump Fire is expected to be fully contained by the end of Monday. About 450 firefighters from multiple agencies worked over the weekend to help put out the fire.

UPDATE (5:00 p.m. MDT): All evacuations for both Saratoga Springs and Eagle Mountain have been lifted. Residents can return to their homes.

The fire is now 40 percent contained.

Eagle Mountain Mayor Heather Jackson says residents are urged to return in an orderly fashion and to remain on alert in case of possible evacuation.

Crews with Rocky Mountain Power have been on hand since the fire began and there are no outages reported in either community.

UPDATE (4:54 p.m. MDT): Fire crews will reassess evacuations at around 5 p.m. and make a decision about whether residents can return to their homes.

UPDATE 1:13pm: Hotspots are flaring up as winds pick up at the Dump Fire, FOX 13's Zach Whitney and Paul Sanchez are reporting.

Saratoga Springs has asked residents to turn off their irrigation systems to help firefighters trying to attack the fire from the sky.

Saratoga Springs posted on its Facebook page it was working on a plan to allow people back into their homes and more was expected to be announced this afternoon. Some people may be allowed into their homes this evening, but that depends on the wind and weather, firefighters cautioned.

Those wishing to donate or volunteer to help with the Dump Fire are urged to contact the Utah chapter of the American Red Cross.

Update (7:01 p.m. MDT) Rocky Mountain Power says that at least 13 power poles and structures have been damaged by the fire. About 20 customers are currently without power, but none are homes.

Crews have been on-scene since the fire began to make sure outages are minimal. They are on-hand to make repairs to the damaged equipment when it's safe.

Eagle Mountain city officials say that the only area in the city that is under a mandatory evacuation order is Kiowa Valley; residents are reminded that they can't return to their homes Friday night. Adjacent areas are under voluntary evacuations.

Update (4:38 p.m. MDT) Saratoga Springs and Eagle Mountain residents affected by the evacuation will not be able to return to their homes Friday night.

Update (4:26 p.m. MDT) Fire officials say the flames in the Dump Fire are as high as 60 feet in some areas.

Update (4:09 p.m. MDT): Fire officials confirmed the fire size as 4,000 acres. They say it is due to more accurate GPS information. More than 500 homes have been evacuated by the Utah County Sheriff's Office.

Update (3:14 p.m MDT): Utah County Sheriff's Office is developing a plan to escort people to their homes for life-safety issues such as medications, according to Jason Curry, with the Department of Natural Resources.

They are also working on a plan to retrieve pets that might still be in the evacuation zone, Curry said.

The fire reportedly has burned 1,600 acres. According to Curry, the last time conditions were this dry was in 2007.

"If we can all get together to do our part to prevent human-caused [fires], then we can deal with the ones mother nature hands us," Curry said.

Update (2:05 p.m. MDT): A Type-2 team has been ordered, which will bring in some long-range capabilities, according to Jason Curry, with the Department of Natural Resources.

Curry said they are in the process of re-calculating the containment time frame estimate, as the fire will likely not be contained by Saturday morning as previously predicted.

Dump update: 394 homes total are being evacuated in Saratoga Springs. ‪#wddblm via @UtahWildfire.

Update (1:45 p.m. MDT):  No structures have burned at this point, according to Jason Curry, with the Department of Natural Resources. He said people have been cooperative during the evacuations.

"Extreme fire behavior. We're looking at extremely dry condition, a lot of dry wind from the southwest," said Curry. "That's a perfect recipe for extreme fire danger. We are going to have fire burning into the night." He said typically at night, it gets cooler and there is more moisture in the air, which helps fight a blaze.

"We are not expecting quite the reduction in fire behavior tonight. It is going to continue to burn," Curry said.

Update (1:10 p.m. MDT): The #dumpfire being fueled by powerful winds via @BenWinslow.

Update (1:06 p.m. MDT): The evacuation area now includes all of the Stillwater subdivision and continues north to the Church farm via @saratogasprngut.

Update (1:01 p.m. MDT): The American Red Cross have not yet announced any details about overnight accommodations for evacuees. It's not yet clear if those are needed.

No pets should be brought to the Westlake High School shelter, according to the Red Cross.

Update (12:44 p.m. MDT): The fire is about a half mile from homes, but is moving laterally and not toward the houses said Cami Lee, Bureau of Land Management.

Update (12:31 p.m. MDT): Eagle Mountain Mayor Heather Jackson said they are bringing in more air assets and have been speaking with the National Guard for additional support. More ground crews have been ordered in to help as well.

"We can dump as much water as we want, but if we don't get it out on the ground, it's not going to stay out," said Mayor Jackson. "We don't know how long this is going to take. The winds certainly don't help us with the situation and we just hope that the winds die down and that we get those assets here as soon as possible."

Update (12:20 p.m. MDT): The fire has burned around the Dyno Nobel Plant according to @UtahWildfire.

Update (12:10 p.m. MDT): There is a mandatory evacuation of Jacob's Ranch in Saratoga Springs, said Mayor Mia Love. She said they are opening schools and other city resources for shelters.

"We've given just as much warning as we possibly can, but we are giving them enough time to get out. They just need to get out," Mayor Love said.

From Eagle Mountain City officials: **UPDATE** Residents in SilverLake subdivision do not need to evacuate at this point. Be prepared. Watch for updates.

Update (12:04 p.m. MDT): People living in the Ranches area, especially south of Pony Express, be prepared to evacuated, said Eagle Mountain Mayor Heather Jackson. She said they are not asking people to leave yet, but if you are asked to evacuate, please do so.

SARATOGA SPRINGS, Utah - About 250 homes are being evacuated along the Eagle Mountain and Saratoga Springs boundary on Friday morning, according to officials.

A Dyno Nobel plant is located near the fire. The plant is a supplier of industrial explosives and blasting services to the mining, quarrying, seismic and construction industries.

"We just don't want to take any risks at this point," said Cami Lee, Bureau of Land Management.

Mandatory evacuations are set for the entire subdivision of Saratoga Hills and adjacent subdivisions, said the Saratoga Springs Police Department.

"It's just covered in smoke, the whole valley is nothing but a layer of smoke and I think that is why they are evacuating our area. There is more smoke than fire at this point," said Shad West, an evacuee in Eagle Mountain.

The homes being evacuated are between Kiowa East to Highway 68 (Redwood Road) and between North Grandview Avenue and Pony Express. Highway 68 is closed from 400 North to Harbor Bay Drive.

An evacuation center has been set up at Westlake High School which is located at 99 North Thunder Boulevard in Saratoga Springs.

There is no time frame set for how long the evacuations will be in place, according to Lee.

Fire crews are battling a human-caused wildfire that started west of the landfill in Saratoga Springs. The fire has traveled over the mountain ridge and has came closer to Eagle Mountain.

Authorities say the 700 plus acre "dump" fire was caused by target shooters at around 11 a.m. Thursday. The fire quickly grew, fueled by sagebrush and Juniper trees.

"We have been out here a lot. We have had a lot of target shooting fires, so that is a concern, with the shooters just being safe and making sure that they have a good backdrop," said Cami Lee, Bureau of Land Management.  "Maybe on days like today where it's really dry, hot and windy, they might not want to shoot out here and they might want to consider going to a shooting range instead."

There are eight crews working on the fire through Friday, and Lee said they hope to have it contained by Saturday. On Friday morning, the fire was said to be about 20 percent contained.

On Thursday, Fire crews brought in bull dozers to create a fire line to build a perimeter to help contain the fire. Firefighters also attacked the flames from the air, dropping buckets of water from helicopters.

"They're able to catch the fire, primarily on ridgetops and hilltops and that way they can sort of corral it in the canyon," said Bureau of Land Management spokesperson Teresa Rigby.

Residents in Eagle Mountain are on standby as the flames move toward the city.

"Eagle Mountain, it's definitely on the radar. We are looking at all the things that could be a problem," said Rigby.

Five federal agencies and the Utah Division of Natural Resources is hosting a press conference in Draper on Friday at 1 p.m. to talk about the growing fire danger and the rash of human-caused wildfires that have occurred.