Jurors delivered the verdict around 10 p.m. after deliberating for about 21 hours. There were convictions related to all 10 sexual abuse victims, with the three not-guilty verdicts applying to three different individuals.

Sandusky stood slightly hunched, looking down with his hand in his pocket but showing no visible emotion as the guilty verdicts were read out in court. His wife, Dottie, blinked back tears. 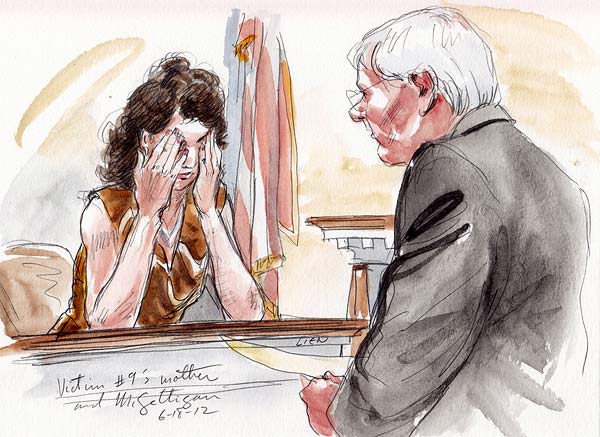 Sandusky’s case gripped the nation and led to the dismissal of a legendary coach and one of America’s highest-paid university presidents, while his trial included gripping and at times graphic testimony from his victims.

During closing arguments, prosecutors described the ex-Nittany Lions defensive coordinator as a pedophile who preyed on victims using a charity he founded for troubled children, repeatedly abusing young boys in his care.

Sandusky, 68, had pleaded not guilty to the 48 charges of child sex abuse that spanned a 15-year period.

His defense sought to poke holes in the prosecution’s case throughout the trial, such as pointing to inconsistencies in the testimony of Mike McQueary, a former graduate assistant who testified that he witnessed Sandusky apparently sodomizing a boy in a university shower.

Defense attorney Joe Amendola reminded jurors of the lack of physical evidence in the case, accusing the alleged victims of conspiring for financial gain, while also blaming the media for what he described as biased coverage.

In a bombshell announcement Thursday evening, Matt Sandusky — one of Jerry Sandusky’s six adopted children — said through his attorney that he was sexually abused by the former Penn State assistant football coach, adding that he had been prepared to testify against him.

Legal analysts say the accusation could bring additional charges, including incest charges, against the former coach.

During grand jury testimony, Paterno said that he was told by a graduate assistant that Sandusky was in the showers “fondling or doing something of a sexual nature to a young boy.”

The Nittany Lions’ head coach, who died on January 22 after a career that had him widely credited with bringing the program to national prominence, reported the incident to his superiors but did not inform police, the school’s board of trustees said in a report that explained Paterno’s firing.

“We determined that his decision to do his minimum legal duty and not to do more to follow up constituted a failure of leadership by Coach Paterno,” the trustees said.

That decision prompted rioting from Penn State university students, overturning a news van and clashing with police, who used tear gas break up the crowds.

After a week of testimony, during which time witnesses graphically described sexual encounters with Sandusky that they said occurred durijng their boyhoods, jurors made their decision without ever having heard from Sandusky on the witness stand.

If the former coach had testified, prosecutors could have potentially submitted as new evidence a November television interview he had with NBC sportscaster Bob Costas.

In a portion of the interview that was not part of the original broadcast, Sandusky told Costas that he “didn’t go around seeking out every young person for sexual needs that I’ve helped.”

On Tuesday, the prosecution called its only rebuttal witness to counter testimony that raised questions about the former coach’s mental health.

Dr. Elliot Atkins earlier had testified that he diagnosed Sandusky with histrionic personality disorder, part of a class of conditions called dramatic personality disorders, which are marked by unstable emotions and distorted self-images. But a second psychologist, prosecution witness Dr. John O’Brien, disputed those findings, saying that the “personality profile Mr. Sandusky exhibited was within normal limits.”

A day later, the defense called Dr. Jonathan Dranov, an acquaintance of McQueary’s, who said the former graduate assistant told him he heard “sexual sounds” and saw the boy in the shower when an arm reached around him. Sandusky then emerged from the shower area, he quoted McQueary as saying. But McQueary said he did not actually witness a sexual encounter, Dranov said of their conversation.

That account differs from what the former graduate assistant testified he saw.

McQueary said he witnessed Sandusky pressed up against the boy in the shower and that it seemed obvious the former coach had been sodomizing the child.

On Tuesday, Sandusky’s wife told jurors that she could remember at least six of her husband’s accusers staying overnight at their house, but that she never witnessed sexual abuse.

Eight young men testified, often in disturbingly graphic detail, of how Sandusky forced them to engage in sexual acts in various places, including showers in the Penn State coaches’ locker room, hotel rooms and the basement of his home.

One told jurors that Sandusky — whom he met, like many of the accusers, through The Second Mile foundation that the ex-coach founded — had threatened him if he told others about the abuse. Another said Sandusky warned him that he might send him home from a trip to Texas, where they’d gone to watch a Penn State bowl game.

The defense challenged the accusers’ timetable, questioned the various allegations and called multiple character witness to defend Sandusky’s stellar reputation in the community.