The Church Camp Fire evacuation will be lifted in phases.

The current plan is that we will allow those owners that have suffered damage to enter the area on Saturday, July 7. We will start at 8:00 a.m. Those owners that wish to examine their property will need to go to the road block at the top of Indian Canyon and check in. This will be the only access point.

Owners will need to show identification and be on our list in order to enter the area. Most of the owners on that list have been contacted and have received this information. There will be some safety information provided at that point prior to entry.

We want to emphasize that Saturday is for those that we have contacted, or will contact prior to then. Damage to property information has been provided by the Fire assessment team and we are relying on that information on who to contact that have suffered damage to their property.

Sunday, July 8, at 8: a.m. we will open the area to the other owners of property in addition to those listed above. Again, they will need to provide identification at the same location, and if not on the damaged property list, show proof of ownership in the form of a tax notice, power bill or other official document.

Access to the closed area will be limited to owners only for a few days. We will lift the road blocks as soon as possible

DUCHESNE COUNTY, Utah -- The Church Camp Fire that started Sunday about 22 miles south of Duchesne has since destroyed several structures and burned up to 5,950 acres.

Firefighters say that six to eight structures have burned after the fire moved its way across the Argyle Ridge. About 535 personnel are working to contain the fire, some of them on the ground and others attacking it from the air using helicopters and a DC-10 air tanker.

The fire was reported around 6 p.m. Sunday, June 24. The cause is unknown. More than 80 structures are potentially in the fire's path. 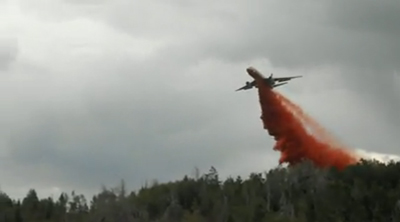 Authorities say the fire, which has been upgraded to a Type 2 incident, has 55 percent containment after reinforcements were sent on Friday.

14 homes and 45 structures have been lost in the fire, but fire officials say that number could go up as they perform more assessments.

Chris Schmitt owns a summer cabin near Argyle, near Indian Canyons. He was lucky to find his home still standing.

"I was very fortunate that I was able to get in there and see that the structure was intact and that my canyon was not on fire," said Schmitt.

However, Kyle Butcher, a rancher, could only watch and wait knowing his cows were somewhere beyond the fire's front line.

Multiple fire engines, bulldozers and helicopters were dispatched to fight the fire, including a 11,000 gallon capacity DC-10 air tanker. The fire was named a level-two fire Monday afternoon.