SALT LAKE CITY - Police in Salt Lake City are seeking the public's help in finding a missing and endangered man.

25-year-old Robin Putnam was traveling from Oakland, Calif., to Grand Junction, Colo., by Amtrak last Sunday. His belongings arrived in Colorado, but Robin was not on the train.

"We were in Grand Junction to pick him up at 10:20," said Robin's father Douglas Putnam.  "His stuff arrived on the train but he wasn't there."

Putnam's family believes he got off the train during a stopover in Salt Lake City at 3 a.m. on Sunday, July 8.

Police say Putnam is considered missing and endangered because of mental health issues.

"He was having some anxiety problems and really a lack of sleep for several nights and having a hard time concentrating on his job, he was getting overwhelmed and that's why he was coming home," said Douglas.

Putnam left his laptop, ID and journal on the train when he got off in Salt Lake City. His father believes his son may have panicked and gotten off with every intention of getting back on the train; the train's conductor told Douglas that Robin had been acting strange and seemed confused.

"In his journal, the last things he wrote was he really excited to see us and come home, so we know something went terribly wrong," Douglas said.

Douglas is now in Salt Lake City looking for Robin but a week has gone by and he's asking for help from the public. He wants Robin to know that his parents need to know if he's okay.

"If you're somewhere with somebody and you want to stay there, that's fine just let us know so we don't have to worry and we love you and we want you back," he said.

Robin Putnam is described as 6-feet, 1-inch tall, about 140 pounds with blue eyes and blond hair. He may be wearing glasses. 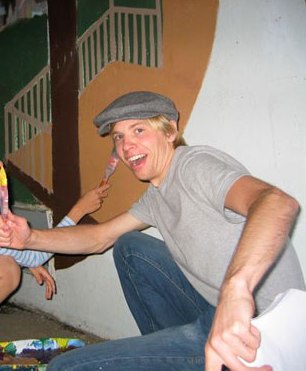