ST. GEORGE -- A SkyWest Airlines pilot wanted on suspicion of murder stole an airplane and crashed it into the airport terminal and into a dozen cars in a parking lot before killing himself, police here said.

St. George police, the FBI, TSA and SkyWest Airlines were all investigating the incident that happened overnight at the St. George Municipal Airport. Police said Brian Hedglin, 40, apparently drove a motorcycle up to a fence on the perimeter of the airport, threw a rug over a barbed-wire fence and scaled it.

An officer patrolling the airport overnight spotted the motorcycle. As he responded back to the main terminal, he saw the aircraft.

"What he initially sees is the red light on the tail, and then as he gets closer he realizes there's a plane in the parking lot," said St. George Police Capt. James Van Fleet.

Van Fleet told FOX 13 it appeared Hedglin had climbed into the aircraft through a cockpit hatch. He had removed the blocks and started the plane, but backed it into a jet bridge where it clipped the wing.

"And then he came forward, and at no point, from what I can see, is he heading toward a runway," said Van Fleet. "He's clearly, once he hits there and goes forward he goes right toward the parking lot." 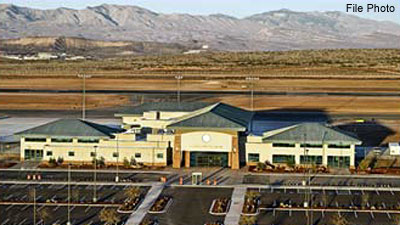 Marc Mortensen, assistant city manager for St. George, said both of the jet's planes were moving at a "pretty good speed" when the aircraft scraped the wall of the terminal, crashed through a fence and slammed into the parking lot. About a dozen cars were damaged. Some were covered in jet fuel and hydraulic fluid.

The CRJ200 aircraft's wing was sheared off, video shot by FOX 13 of the plane near a hangar revealed. The nose sustained heavy damage as well. SkyWest Airlines had removed its logos from the plane.

Damage to the airport is estimated in the hundreds of thousands of dollars, Mortensen said.

The police officer patrolling the area contacted SkyWest Airlines, and a SkyWest maintenance employee was able to shut down the engines from the outside. The officer went inside the plane and discovered Hedglin's body in the aisle. Hedglin died from a self-inflicted gunshot wound, police said.

Sources confirmed to FOX 13 that Hedglin was a captain with SkyWest Airlines. He was on administrative leave at the time of incident, the airline said.

FOX 21 in Colorado Springs reports Hedglin was wanted in connection with the death 39-year-old Christina Cornejo, whose body was discovered there on Friday. Family members told FOX 13 on Tuesday that the mother of four had broken up with him.

"She was calling it quits," said George Cornejo, Christina's uncle. "I guess the guy didn't like it so he murdered her."

The FBI recovered a flight voice and data recorder, as well as numerous security camera videos from the airport. Sources told FOX 13 a large part of the incident was captured on tape.

However, authorities acknowledged they may never have a motive for what happened -- whether he intended to hijack the plane and escape or crash it.

"We may get more information about his actions, if he's still manipulating the plane at certain points, if we can hear any statements he makes, any gunshots," said Van Fleet. "But in the end there's some things we may never know."