Police: No evidence murder suspect tried to escape in plane

ST. GEORGE, Utah -- Police continued their investigation into a murder suspect's attempted theft of a SkyWest Airlines jet that crashed into the airport here. But authorities told FOX 13 on Wednesday they had yet to find any evidence that Brian Hedglin had attempted to escape in the aircraft.

Police detectives and FBI agents were back at a hangar near the St.
George Municipal Airport, searching for clues that could explain the actions of Hedglin, 40.

"We may never know," St. George Police Capt. James Van Fleet told FOX 13. "But we are looking at alcohol and drugs, through toxicology reports. We have been told the voice and data recorders have been captured. They'll be sent off for analysis."

Hedglin, a SkyWest pilot, was sought by Colorado Springs, Colo., police in connection with the murder of his ex-girlfriend, 39-year-old Christina Cornejo. She was found dead inside her home on Friday. 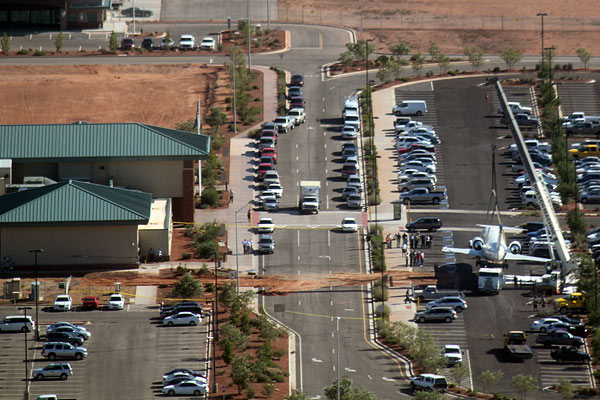 Police said Hedglin drove his motorcycle up to a perimeter fence at the St. George Municipal Airport on Tuesday, used a rug to scale a barbed-wire fence and then worked his way to the SkyWest Airlines jet parked behind the terminal. He then started it and attempted to taxi it, police said. A wing clipped a jet bridge, shearing it. The plane then scraped the side of the terminal building, went through a fence and crashed into about a dozen cars. Photographs obtained by FOX 13 showed the path of destruction and destroyed cars.

But police told FOX 13 that detectives have found no evidence so far that indicates Hedglin was stealing the plane to escape.

"I've looked at the crash scene," Van Fleet said. "It doesn't appear that he goes any other direction. He didn't make any moves to go towards the runways. He throttled it up and went right towards the parking lot."

Authorities were reviewing airport surveillance cameras which had captured a lot of the incident. They hoped the voice and data recorders from the plane might reveal when Hedglin shot and killed himself, which could explain why the plane went toward the parking lot. The aircraft did not have much fuel in it, police said. As a pilot, Hedglin would have known how to taxi it and no evidence shows the plane moving toward the runways.

"Where the plane started and the plane ended, and where the runway was, there is literally what appears no movement towards the runway,"
Van Fleet told FOX 13. "He's moving straight forward through the fence, through the parking lot and stop."

St. George city officials planned to review security at the airport in light of the incident. Only one police officer patrols the airport grounds overnight. The officer spotted Hedglin's motorcycle, officials said, and had already called for backup when he found the jet crashed in the parking lot. Marc Mortensen, assistant city manager, noted the situation was so unique that additional security may not have prevented it.

"I think in these odd circumstances when someone is hellbent on doing whatever it is he was trying to do, a number of security measures in place probably wouldn't have kept this from happening," he said.