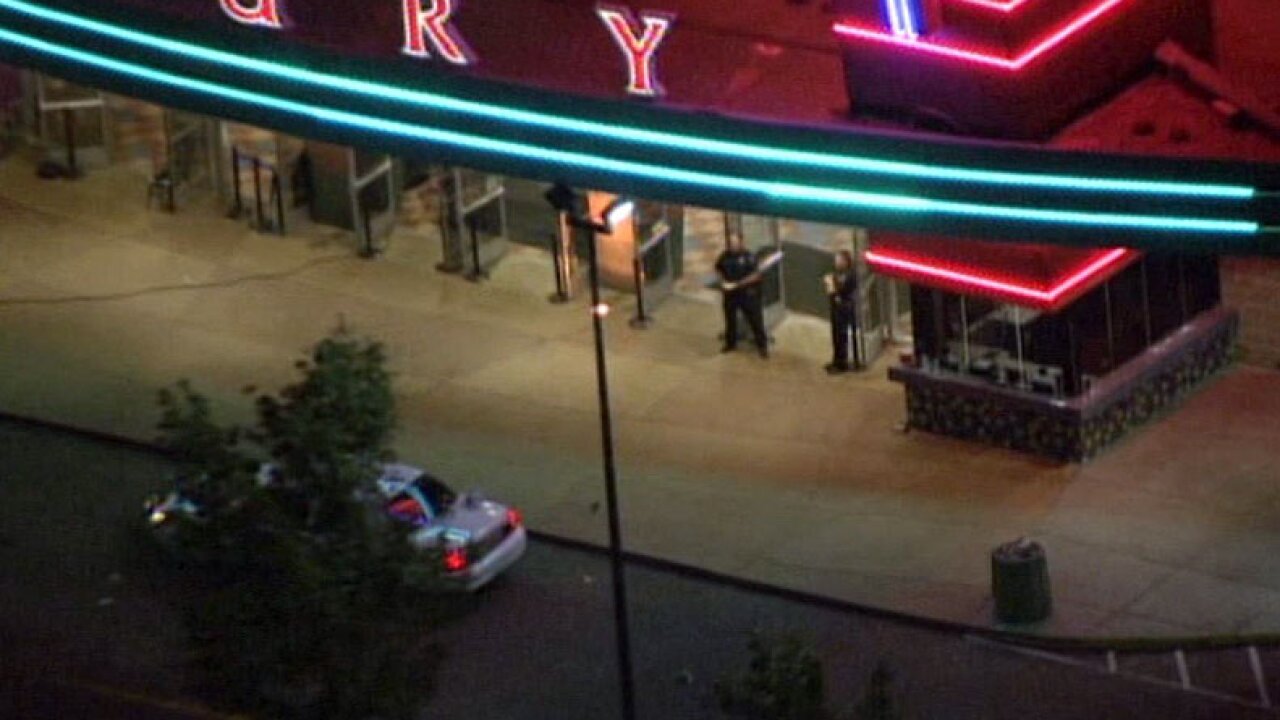 (CNN) — It was a dark theater, playing a movie that includes gunshots, in the middle of the night. So when a gunman burst through an exit door, threw a gas can into the crowd and began shooting, many inside the Aurora, Colorado, theater didn’t realize what was happening.

“I think we were 15 minutes in, and there was a chase scene where there was gunfire on screen,” said witness Quentin Caldwell. “And right then out of nowhere on the right side of us we hear a very distinct ‘pop pop pop pop.’ “

His wife jumped, Caldwell said, but “I kind of sat there, thought it was probably just really good special sound effects.”

But soon other patrons of the midnight showing of “The Dark Knight Rises,” the new Batman movie, began to say that there was a shooter in the theater — and Caldwell saw people wounded.

One young couple was holding a bleeding woman by her face and guiding her down the stairs, Caldwell said. “I looked to my right and another gentleman is holding his stomach and running down the stairs trying to get out of there.”

Even after he left the theater, some people stayed behind not understanding what happened and thinking the movie might continue, Caldwell said. “I looked at them like, ‘This is real, there’s something wrong, we need to leave now.’ “

Jennifer Seeger, who sat in a different part of Theater 9 at the Century Aurora 16 multiplex, said the shooter lit a gas can and threw it into the crowd, then shot the ceiling to scare everyone.

Trey Freeman, another witness, said the shooter threw a second gas canister. “He looked so calm when he did it, it was so scary,” Freeman said in a YouTube video.

Witnesses described the man as dressed in black with a gas mask and bulletproof vest.

When the gunman began shooting, “I thought there was no way I was going to get out of there without getting shot,” Freeman said.

In the rush to leave, some people were stepped on or pushed, Derek Poag told CNN.

Outside the theater, it was chaotic, with wounded people everywhere, Caldwell said. He saw one girl in a pink hoodie, her left side peppered with wounds.

Cell phone video taken outside the doors of the theater complex showed panicked moviegoers calling out for help or searching for friends.

One man can be seen walking out with assistance, the back of his shirt covered in blood. A woman examines her body, as if checking for wounds.

Alex Milano was in the next theater over that was also showing the Batman film.

He also said there was a shooting scene happening on screen when the sound of real bullets was heard nearby.

“Loud bangs came from the right of the theater. Smoke took over the entire theater, and it was really thick and no one could really see anything,” he said.

Confused at first, Milano realized the severity of the incident when he witnessed “objects” starting to come through the wall, presumably bullets.

Some people in his theater started moaning in pain, and alarms at the building started sounding.

Outside, Milano spoke with a woman who was inside Theater 9. What she heard “sounded like madness to me,” he said.

One scene stuck in his head — a police officer carrying a little girl in his arms. The girl wasn’t moving.