Gasoline fumes were ignited, causing a fire that spread from the victim’s pickup to a workshop and some nearby vehicles.

The victim sustained 1st-3rd degree burns to 30-40 percent of his body. He was taken by helicopter to the Burn Center at the University of Utah Medical Center.

“He looked traumatized. He looked definitely like he was in shock – had burns over the majority of his body,” said Monica Warden, a neighbor. “He didn’t have shoes on. I don’t know if that was from the fire or what had happened, but he looked like he had severe burns on the bottom of his feet and his arms.”

The workshop was a total loss, as were two vehicles, a motorcycle and two duck hunting boats. Two other vehicles and another boat were also damaged. Fire officials estimated the damages at $80-90,000. 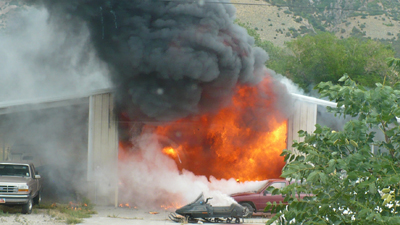