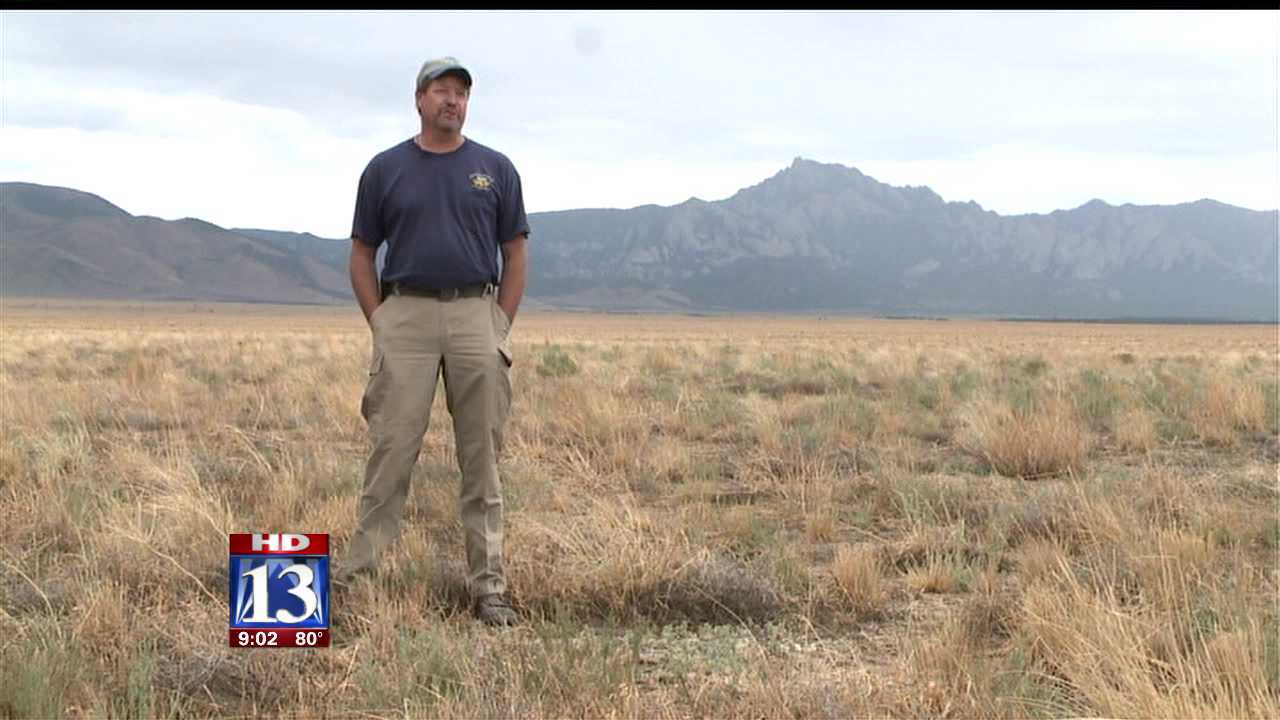 The largest wildfire in Utah's history started on July 7, 2007 when lightning struck a fence post on the outskirts of the town of Milford. Driven by wind, fire quickly spread northeast into the wide-open cheatgrass and sage brush covered expanse known as the Milford Flat.

Bureau of Land Management Fuel Program Manager Paul Briggs estimates that at times the Milford Flat Fire may have moved across the land at speeds up to 40 miles per hour.

"It took everything. Essentially looked like a moonscape. Didn't even leave the stubs of the sage brush. Cleaned it right to mineral soil," Briggs says.

The fire moved up and over a mountain range, descending upon Interstate 15. Poor visibility from heavy smoke contributed to a pile-up on the roadway which killed two people. Some drivers, unable to see in the smoke, left their cars and rigs on the road, running on away on foot to watch them burn from a distance.

When the fire crossed I-15 in places, it forced the evacuation of Cove Fort where some structures including a historic cabin were destroyed.

Over the course of several days the fire consumed over 363,000 acres (567 square miles) before it was put out. By way of comparison, Weber County in Northern Utah is 576 square miles in size.

Weeks after the fire was out, dust and ash were carried by winds into the Wasatch Front.

The same summer, the Bureau of land Management, along with then Governor Jon Huntsman, held a press conference to announce a reseeding program to treat the burned area. At the time, it was estimated the reseeding effort would cost up to $8 million.

Five years later, the burn scar is hardly distinguishable for the most part.

Grasses and sage brush carpet the valleys and hillsides once ravaged by the fire. The only obvious remnants of the fire are the blackened juniper trees, many of them along I-15 looking like soldiers who lost a war.

"The 'skeletons' as we call them, are still standing," says Nick Howell, who is a Fire Mitigation and Education specialist for the Bureau of Land Management.

Howell says reseeding efforts go into any fire which burns 50 acres or more. Although the junipers haven't been reseeded, they'll return naturally, he says, from seeds already in the soil. But it could be a decade before the next generation of junipers makes a strong showing.

"There were different treatments for different areas," Howell says of the Milford Flat fire.

In some places, bulldozers pulling chains cleared land and turned soil. In others, airplanes dropped seed mixes of native and non-native grasses from above.

"I'm extremely pleased with what we see here now. I think we've got an excellent return on our investment," Briggs said as he stands in the middle of Milford Flat pointing out different varieties of grasses, some still green in the middle of July.  "We're unlikely to see large wildfires in here for several years And if we do, which we will because fire is a part of the natural system, we don't have to make this investment again,” said Briggs. “These species will recover on their own.”

He says several areas had to be seeded more than once, since wind and weather didn't always cooperate with initial reseeding efforts.

The original $8 million estimate in 2007 swelled to $17 million in actual costs, but Briggs says compared to fighting fires, reseeding is still a better investment than allowing the cheatgrass to return.

"What it costs to fight a fire this size, especially when you bring in those national incident management teams, can exceed one million dollars a day," said Briggs.

He says that cheatgrass does reseed itself and can rebound quickly after a fire. Some cheatgrass can be seen growing on Milford Flat today, competing with its newer neighbors.

"If this were to catch fire right now, it would support fire, especially in the heat of the afternoon, but it would be a lower intensity fire,” says Briggs. “You can see there's still quite a bit of green in some of this vegetation.”

If a fire were to happen on the flat now, he's confident it would be "slower" and "spotty" giving firefighters "more safety and more of a chance to put it out."

As evidence, BLM officials showed an area just a few miles from Cove Fort, where a small fire named the "Cowboy Line Fire" occurred this year.

"What we're looking at here is a fire from two months ago in the Milford Flat Rehabilitation project," Nick Howell said.

A witness who called 911 says the fire started after winds caused power lines to arc, somehow starting a fire below.

"Firefighters did respond, but by the time they arrived the fire was actually out," Howell said. "Due to the reseeding efforts and just the sheer location, the fire wasn't able to spread or get established."

The blackened area on the ground was 200 square feet or less.

Howell admits the BLM will not always be this lucky, but for now he is happy that in the shadow of what was once Utah's largest wildfire, the Cowboy Line is one of the smallest.