SALT LAKE CITY -- The Salt Lake Bees are honoring the 25th anniversary of the Salt Lake City Trappers' 29th consecutive win, and you'll never believe who was there to take part in the celebration.

Actor/comedian Bill Murray, who was one of the owners of the Trappers, stopped by Spring Mobile Ballpark Thursday afternoon.

Murray, while speaking with FOX 13, says being part owner of the Trappers was an experience that ranks up there with some of his past roles like Peter Venkman from Ghost Busters and Carl Spackler from Caddyshack.

Murray recalls how the team rose up and dominated the minor league circuit bringing a lot of attention to Salt Lake City.

The Trappers' record streak brought them national coverage on ABC's Wide World of Sports and got them a spread in Sports Illustrated magazine. 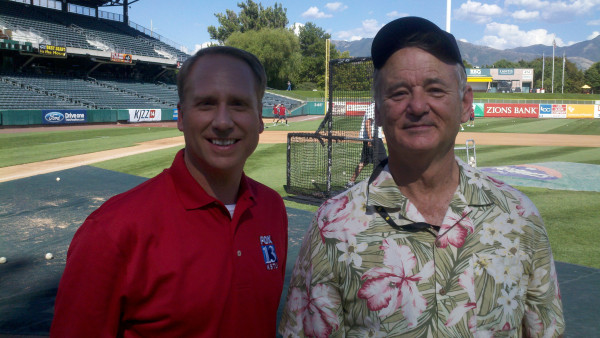 "'85 was the first year here, we won the championship then -- we won in '86, we won in '87 and from then on they were out to get us, the Major League organizations hated us. It was a blood feud," said former Trappers part-owner Van Schley.

"People said you couldn't have baseball in Salt Lake and we proved that you could," said Murray.

When asked after 25 years having passed, what he thought about seeing the baseball players and crew again, Murray replied: "Everyone looks exactly the same."