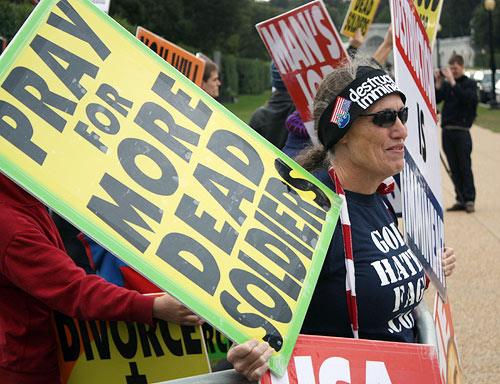 WASHINGTON (CNN) — A comprehensive bill on veterans affairs awaiting President Barack Obama’s signature includes provisions that would expand restrictions on protests at military funerals such as those carried out by Westboro Baptist Church of Kansas.

Under the “Honoring America’s Veterans and Caring for Camp Lejeune Families Act of 2012,” which won final congressional approval Tuesday, protesters must be at least 300 feet from military funerals from two hours before they start until two hours after they end.

Violators could face unspecified fines and up to two years in prison.

The Kansas church has attracted nationwide attention for its angry, anti-gay protests at the funerals of U.S. military members.

It won an appeal at the U.S. Supreme Court last year in a case that tested the competing constitutional rights of free speech and privacy.

There was no immediate response Thursday to a CNN e-mail to the Westboro Baptist Church seeking comment.

Led by pastor Fred Phelps, the church believes God is punishing the United States for “the sin of homosexuality” through events including soldiers’ deaths.

Members have traveled the country shouting at grieving families at funerals and displaying such signs as “Thank God for dead soldiers,” “God blew up the troops” and “AIDS cures fags.”

According to the church website, they will continue protesting at military funerals. It was unclear whether enactment of the new law would change the church’s plans or whether the church would mount a legal challenge against it.

The new restrictions expand on provisions in a federal law passed in 2006 that banned protests within 300 feet of national cemeteries from an hour before a funeral to an hour after it, with violators facing fines and up to a year in prison.

The Supreme Court case involved a protest by Westboro members outside the 2006 funeral for Lance Cpl. Matthew Snyder in Westminster, Maryland, near Baltimore.

Snyder’s family sued the church in 2007, alleging invasion of privacy, intentional infliction of emotional distress and civil conspiracy. A jury awarded the family $2.9 million in compensatory damages plus $8 million in punitive damages, which were later reduced to $5 million.

The church appealed the case in 2008 to a federal appeals court, which reversed the judgments a year later, siding with the church’s allegations that its First Amendment rights were violated. The case then went to the Supreme Court, which issued a narrow ruling based on the facts of the specific appeal.

By an 8-1 vote, the high court said members of Westboro Baptist Church had a right to promote what they call a broad-based message on public matters such as wars.

A majority of states across the nation have responded to the protests with varying levels of control over the Westboro church protesters.

Church members say their broader message is aimed at the unspecified actions of the military and those who serve in it. They believe U.S. soldiers deserve to die because they fight for a country that tolerates homosexuality.

The congregation is made up mostly of Fred Phelps and his family. The pastor has 13 children, and at least 54 grandchildren and seven great-grandchildren.

He described himself as an “old-time” gospel preacher in a CNN interview in 2006, saying, “You can’t preach the Bible without preaching the hatred of God.”