UPDATE 8:44 p.m. Thursday: Herriman city is asking for 500 people to volunteer to help re-seed a 400 acre area scorched by the Rose Crest Fire from a few weeks ago. The seeding effort will help prevent flooding in the future.

The re-seeding project takes place on August 25. Details can be found here.

Herriman City reports that firefighters have done some back burning operations, which led to smoke being seen in the area.

UPDATE 8:27 a.m. Thursday: The fire is estimated to be at 6,290 acres and is 10 percent contained, according to Jason Curry, Utah Division of Forestry, Fire and State Lands.

The Utah National Guard released a fire perimeter map for Aug. 7 shown below:

UPDATE 6:26 p.m. Wednesday: Fire officials tell FOX 13 that the fire has jumped containment lines towards Herriman and is now burning towards the north.

They say that there are no structures immediately threatened, but residents near the fire are encouraged to be prepared with 72-hour kits evacuation plans if conditions change.

The Utah National Guard reports that the fire is 4,500 acres and 10 percent contained Wednesday evening.

UPDATE: 7:26 a.m. Wednesday: The fire is now estimated at 3,042 acres and is 40 percent contained, according to Utah Fire Info.

UPDATE: 5:11 p.m. Tuesday: Firefighters say they have about 35 percent containment on the fire. The nearly 3,000 acre fire has been attacked by an interagency team of 150 crew members from both the ground and air by cutting fire lines and dropping water and fire-retardant.

Most of the gains were from the southwest side of the fire, the area closest to homes.

"The division supervisor there tells me he'll have line around that portion of the fire by the end of the shift tonight (Tuesday) ... looking really good in that area, in fact we're looking good for everything near Eagle Mountain City," said Jason Curry with the Utah Division of Forestry.

UPDATE 11:35 a.m. Tuesday: Residents are being allowed to return to their homes as the evacuations were lifted around 10 a.m. Tuesday.

No structures were damaged in Eagle Mountain, however three structures have burned on the base. The buildings were part of a recreated Afghan village that troops used for training.

Crews are working hard to gain containment and an update on the status of containment is expected later on Tuesday.

UPDATE 10:05 a.m. Tuesday: The evacuation orders have been lifted and North Ranch residents are allowed to return home. The fire is still zero percent contained, according to Eagle Mountain City.

UPDATE 8:22 a.m. Tuesday: The National Guard said they have lost three structures used for training in the Pinyon Fire.

UPDATE 7:25 a.m. Tuesday: The National Guard said they are concerned about explosives on the base catching fire in the Pinyon Fire.They are working to keep the fire contained to the base and not allow it to grow north or south.

A Type 3 Team has assumed command of the now 2,300-acre blaze. They have not made any predictions as to when it may be contained.

The North Ranch evacuations remain in place and the city plans to make another announced around 10 a.m.

Wind is still a concern for officials as they work to put out the fire.

UPDATE 6:08 a.m. Tuesday: The fire has burned at least 2,200 acres. On Tuesday, 60 new firefighters will be working the fire to relieve the National Guard teams that have been on site since it started.

There are still evacuations in place for about 100 people in Eagle Mountain. 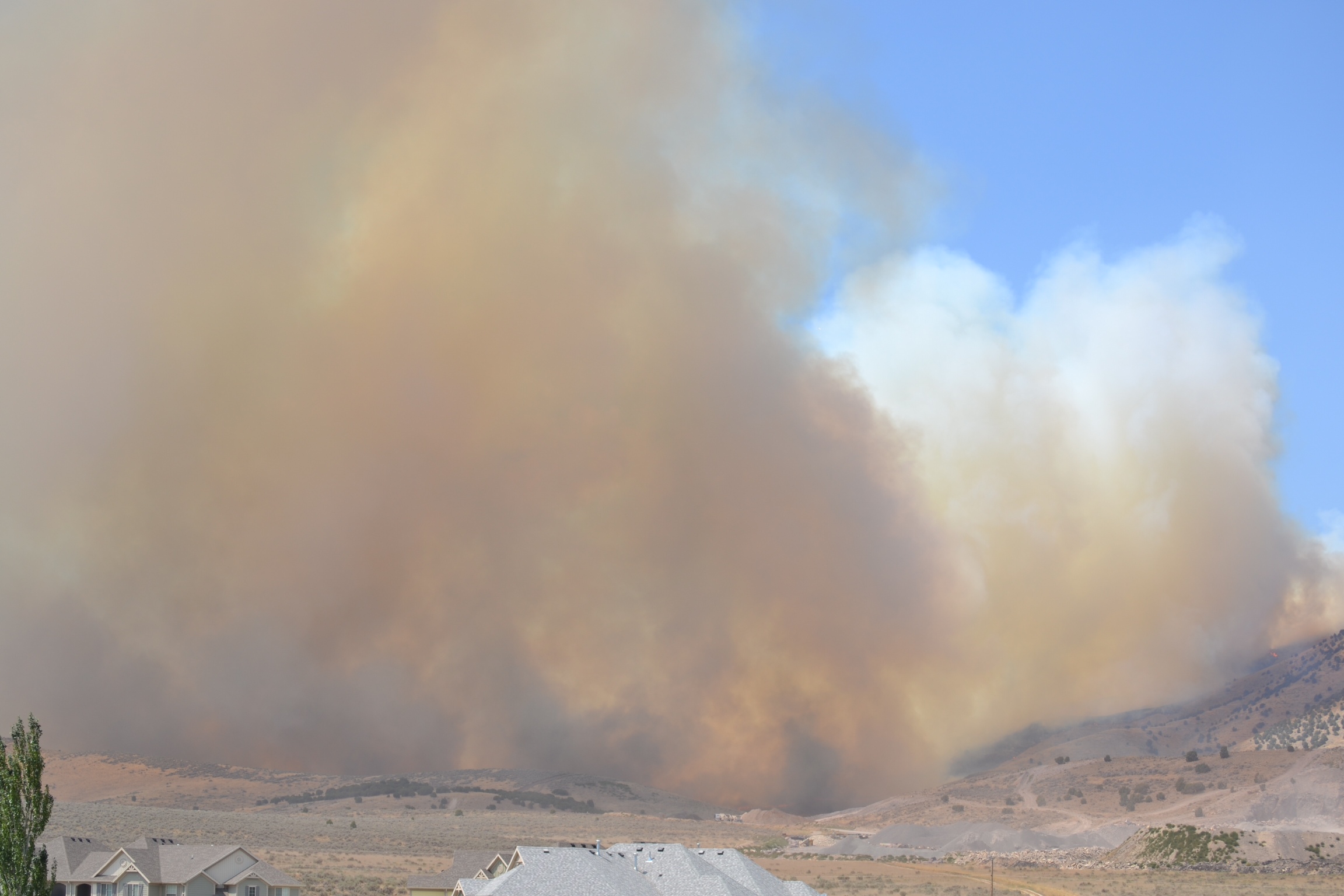 UPDATE 10 p.m. Monday: Evacuations to remain in effect overnight in Eagle Mountain because of the Pinyon Fire. New firefighting teams will be brought in Tuesday morning.

EAGLE MOUNTAIN, Utah - Officials say that as many as 93 homes in Eagle Mountain have been evacuated after the Pinyon Fire draws closer to the city Monday night.

The wildfire that started in Camp Williams Sunday has grown to nearly 2,000 acres and as of Monday evening forced Eagle Mountain's North Ranch subdivision to evacuate.

At about 6:30 p.m. Utah County sheriffs issued the mandatory evacuation notice. Homes in the North Ranch subdivision, located north of Lakeview Lane, were evacuated after the fire crossed the Camp Williams boundary line. Residents were told to go to Rockwell High as the evacuation center at 3435 E. Stonebridge Lane.

Eagle Mountain released a city street guide to help residents locate the evacuation area. The information can be found from the following link (North Ranch can be found on page 11): http://bit.ly/P0sy94.

Several fires were created Sunday afternoon by dry lightning strikes including five in Tooele County and the Camp Williams "Pinyon" fire that originally started on Pinyon Hill, which is on Utah National Guard land.

Crews say the wildfire was within two miles from Saratoga Springs, but winds shifted the flames, bringing in a section of the fire closer to Eagle Mountain.

About 40 Camp Williams firefighters responded and were assisted by local jurisdictions from Unified Fire, Saratoga Springs, Eagle Mountain and Bluffdale.

Five fires are burning in Tooele County. The Faust Fire, near Vernon, is estimated at 25 acres; the Broad Canyon Fire; the Aqua Fire and the Warm Springs Fire. The White Rocks Fire is one of three fires burning in Skull Valley. None are threatening structures.