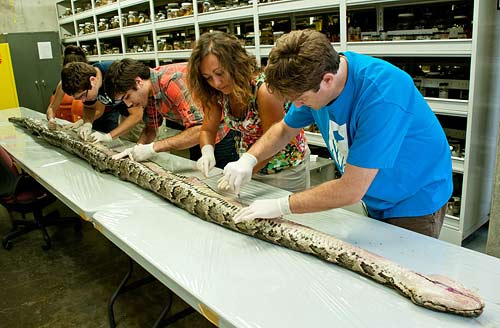 MIAMI (CNN) — University of Florida researchers examining the carcass of a large, pregnant Burmese python said Monday they found a record 87 eggs inside, giving them important clues about the reproductive capability of the dangerous, invasive species.

Scientists at the Florida Museum of Natural History on the university’s campus examined the 164.5-pound, 17.5-foot snake Friday after it was brought there from the Everglades National Park. It is the largest one ever found at the park.

“This thing is monstrous — it’s about a foot wide,” said Kenneth Krysko, the manager of the museum’s herpetology collection. “It means there’s nothing stopping them and the native wildlife are in trouble.”

Everglades National Park and the Florida Fish and Wildlife Conservation Commission are working with other agencies on the problem of the Burmese python, a non-native but established species in Florida that is one of the deadliest and most competitive predators in the southern part of the state, according to the university.

The snakes have no known predator, and population estimates range from the thousands to hundreds of thousands. Previous records for Burmese pythons captured in the wild were 16.8 feet long and 85 eggs.

Scientists say research of the snake’s biology is important in understanding how to stop the python’s spread — not just in the Everglades, but also in the state and around the world.

“I think one of the important facts about this animal is its reproductive capability,” said park wildlife biologist Skip Snow. “There are not many records of how many eggs a large female snake carries in the wild. This shows they’re a really reproductive animal, which aids in their invasiveness.”

The snake was so big that researchers had to pile it on top of itself and wheel it into the examination room on a flat cart. They laid it on a series of tables lined up end to end, and then five researchers worked side by side to dissect the length of the snake.

The Burmese python is native to Southeast Asia and was first found in the Everglades in 1979, the university says. They were determined to be an established species in 2000.

“They were here 25 years ago, but in very low numbers and it was difficult to find one because of their cryptic behavior,” Krysko said. “Now, you can go out to the Everglades nearly any day of the week and find a Burmese python. We’ve found 14 in a single day.”

There are state laws now that prohibit people from owning Burmese pythons as pets or taking them across state lines without a federal permit. Floridians can also hunt them during certain seasons if they have the proper license and permits.

Florida has the world’s worst problem with invasive reptiles and amphibians, the university said. In a study published last year in the journal Zootaxa, Krysko found 137 non-native species were introduced to Florida between 1863 and 2010, with pet trade determined to be the No. 1 cause.