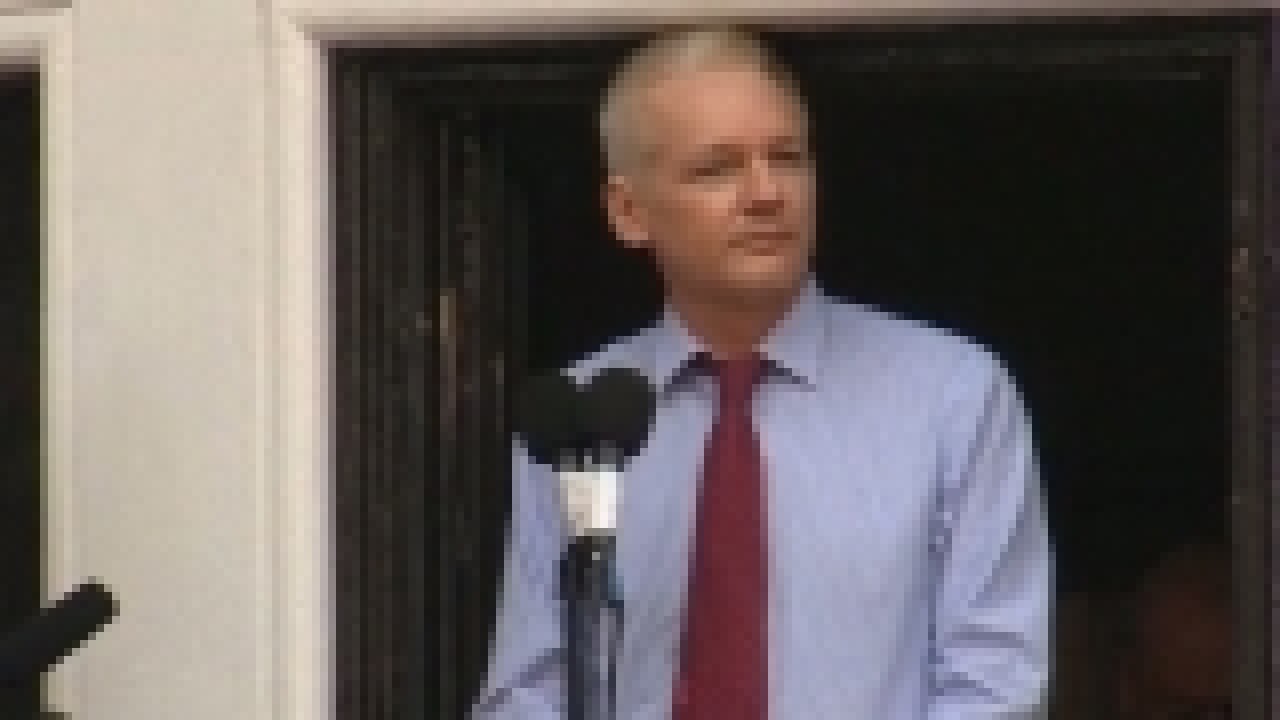 LONDON (CNN) — Julian Assange demanded that the United States drop its “witch hunt” against WikiLeaks on Sunday as he made his first public appearance after months effectively confined to the Embassy of Ecuador in London.

“As WikiLeaks stands under threat, so does the freedom of expression and the health of all our societies,” the founder of website said to cheers from his supporters outside the embassy.

“The U.S. war on whistle-blowers must end,” Assange said, calling for the freedom of Bradley Manning, the U.S. soldier suspected of giving hundreds of thousands of pages of secret American government documents to Assange for publication on WikiLeaks.

The founder of WikiLeaks spoke from a balcony at the Embassy of Ecuador in London, where he has been holed up since June.

His lawyer, Baltasar Garzon, called earlier for him to be given safe passage to Ecuador from Britain.

“Mr. Assange is going to continue fighting for his rights,” Garzon declared, saying that Assange had instructed his legal team to take action.

Garzon, an attorney from Spain who is best known from his years as a crusading judge, did not say what that legal action would be. Garzon was barred from the Spanish bench earlier this year for authorizing the wire-tapping of corruption suspects speaking to their lawyers.

Assange fled to the embassy avoid extradition to Sweden to face questioning about alleged sex crimes.

Sunday marks two months since Assange fled to the embassy. Monday marks two years since Swedish prosecutors first issued a warrant for his arrest, alleging that he raped one woman and sexually molested another.

Assange has been effectively confined for the past two months to the diplomatic mission — a suite of rooms covering half of one floor of a townhouse in a posh London neighborhood south of Hyde Park.

Ecuador raised the stakes in its diplomatic row with the United Kingdom on Thursday, officially offering Assange asylum in the South American country. The British say they will not give him safe passage out of the embassy.

The Foreign Office says Britain has a legal obligation to hand him over to Sweden, after Assange’s legal efforts to avoid extradition were rejected by British courts up to the Supreme Court.

Garzon said that Assange was willing to answer Swedish prosecutors’ questions, but only if he is given certain guarantees.

Assange, an Australian, and his supporters claim a U.S. grand jury has been empaneled to consider charges against him.

Assange claims to fear Sweden will transfer him in turn to the United States, where he could face the death penalty for the work of WikiLeaks.

“Sweden does not extradite individuals who risk facing the death penalty,” the Foreign Ministry said after Ecuador granted Assange asylum.

Assange says the allegations in Sweden are politically motivated and tied to the work of his website, which facilitates the publication of secret documents. He has published hundreds of thousands of pages of American government diplomatic cables and assessments of the wars in Afghanistan and Iraq.

His expected appearance came as foreign ministers from various South American countries gathered in Ecuador to discuss his fate.

The dispute between Britain and Ecuador exploded when the British Foreign Office, in a letter to Ecuadorian officials, cited a little known law that could temporarily suspend the embassy’s diplomatic protection and allow authorities to enter and arrest Assange.

President Rafael Correa on Saturday slammed Britain’s behavior toward Ecuador, describing it as “intolerable” and “unacceptable.”

“Who do they think they’re dealing with?” Correa asked rhetorically during his weekly address. “They don’t realize Latin America is free and sovereign. We won’t tolerate interference, colonialism of any kind.”

The president said Ecuador had asked for, but did not receive, guarantees that Assange would not be extradited to a third country.

Correa has sought support on the issue from foreign ministers of the the Union of South American Nations (UNASUR) and the leftist Bolivarian Alternative for the Americas (ALBA), who gathered in Guayaquil, Ecuador, this weekend.

UNASUR backed Ecuador’s decision to grant Assange asylum and called for more dialogue between Britain and Ecuador on the issue. It condemned the “threat of the use of force” and expressed its hope that the countries could arrive at a “mutually acceptable solution.”

“We warn the government of the United Kingdom that it will face grave consequences around the world if it directly breaches the territorial integrity of the Embassy of the Republic of Ecuador in London,” according to a statement read by Foreign Minister Nicolas Maduro on behalf of ALBA nations.